A plan to construct apartments inside Woodberry’s historic Tractor Building drew both praise and criticism Thursday from Baltimore’s design review panel, which suggested the developer explore a different approach.

END_OF_DOCUMENT_TOKEN_TO_BE_REPLACED

Woodberry residents question whether a proposed development is ‘historic’ enough

Another preservation controversy is brewing in historic Woodberry, just as residents are deciding whether to have their area designated a city historic district.

END_OF_DOCUMENT_TOKEN_TO_BE_REPLACED

New developers selected for Baltimore’s Clipper Mill community aim to add 48 townhouses and about 99 apartments over the next several years, according to preliminary plans that will be presented to the community this week.

END_OF_DOCUMENT_TOKEN_TO_BE_REPLACED

Locally Made, Customized Gifts by Words With Boards – Order by Dec. 13 for Christmas 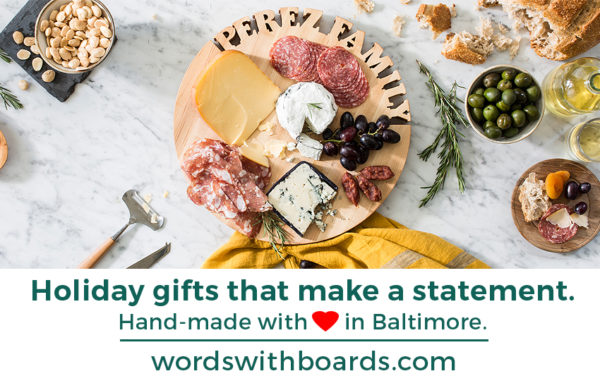 Les Harris’ Amaranthine Museum in Clipper Mill, a 10-year-old attraction that showcases 200 paintings by the late artist Les Harris, is closing permanently this month at its current location and moving to a different site with less space.
END_OF_DOCUMENT_TOKEN_TO_BE_REPLACED This gorgeous home presents a rare opportunity to own a beautifully renovated, distinctive dwelling in a community where one can walk to everything; including nationally recognized restaurants, award-winning coffee shop, artisans and more.

END_OF_DOCUMENT_TOKEN_TO_BE_REPLACED

Want to gain a whole heap of new skills in one delightful evening? That’s the idea behind the Charm City Craft Mafia’s latest venture: the Tiny Workshop. It’s a quick and dirty (okay, not that dirty) intro to three different art forms as practiced by some of Baltimore’s favorite crafters. All supplies are provided, and the level of instruction is perfect even for those with little or no experience. And did we mention the workshop is being held at Artifact Coffee? That means you can sip on some of the best java in town or snack from their always-delicious menu while you master your new found craft skills.

END_OF_DOCUMENT_TOKEN_TO_BE_REPLACED THE IVY BOOKSHOP AND ARTIFACT COFFEE

Michael Kimball is the author of seven books, including Galaga, Big Ray, and Dear Everybody. His work has been translated into a dozen languages, and featured on NPRs All Things Considered and in Vice, as well as in The Guardian and Bomb.

Sarah Pinsker‘s novelette In Joy, Knowing the Abyss Behind, won the 2014 Theodore Sturgeon Memorial Award and was a finalist for the Nebula Award. Her fiction has been published in magazines including Asimov’s, Strange Horizons, Fantasy & Science Fiction, Lightspeed, Baltimore City Paper, and more, and in anthologies including Long Hidden, Fierce Family, and The Future Embodied. She co-hosts the Baltimore Science Fiction Society’s Dangerous Voices Variety Hour, a reading series/quiz show.

Matthew Zingg’s work can be found in Blackbird, Muzzle, Sink Review, The Madison Review, The Awl, HTML Giant, 32 Poems, The Rumpus, The Paris-American, and Everyday Genius among others. Originally from Tennessee, Zingg now lives in Baltimore, where he hosts the Federal Dust Reading Series. END_OF_DOCUMENT_TOKEN_TO_BE_REPLACED

Tonight – Deepen your Practice with Patanjali Yoga – Iyengar based practice is an adjunct to Jennifer’s teacher training – great practice for teachers and for those wishing to enjoy the present moment through true alignment and deepen the focus of their practice. $20