I had the opportunity to get up-close and personal with a landmark that I’ve seen all of my life – the Washington Monument in Baltimore. It’s actually older than its more well-known neighbour to the south in DC, and is getting ready to celebrate its 200th anniversary with a bit of a face lift. 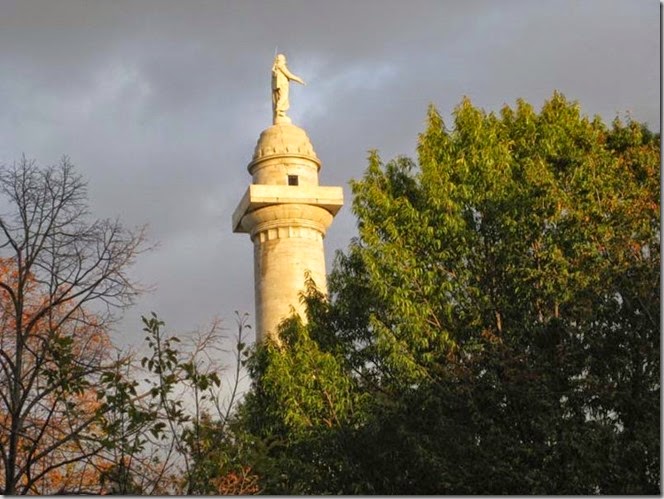 Our tour was lead by my friend Dr. Lance Humphries, who is the chairman of the restoration committee, Mount Vernon Place Conservancy, which is overseeing the restoration and renovation of this 180-foot high monument, capped with a 16-foot high statue of George Washington proffering his resignation to the Continental Congress. 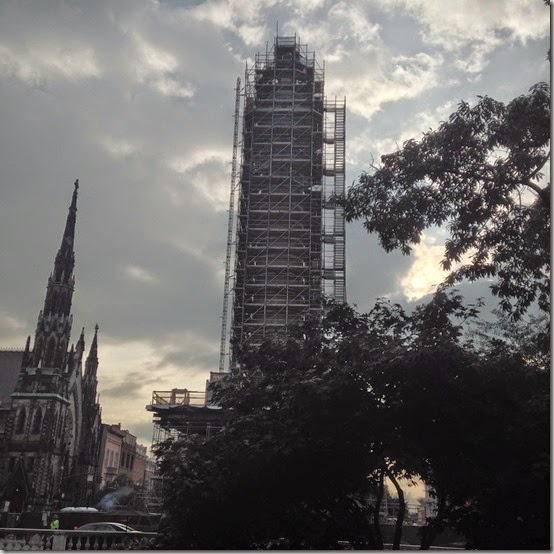 We started at the base of the monument, and got a good indication of why this restoration is necessary. Over 200 years, water has seeped between the marble stones, all quarried locally; iron “staples” intended to stabilize the building rusted and expanded, breaking the stones; years of heavy traffic driving by has shifted stones, and the Monument needed some help.

First, the building was surrounded by a huge scaffolding, and then pieces of marble surrounding the base of the monument were removed and numbered. 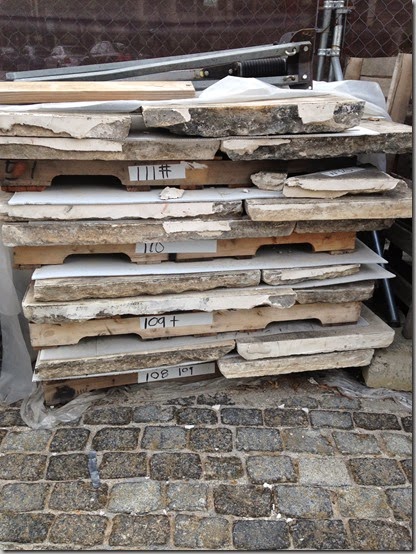 Pieces of marble which had fallen off the base were recovered and replaced, using a specially formulated mortar. 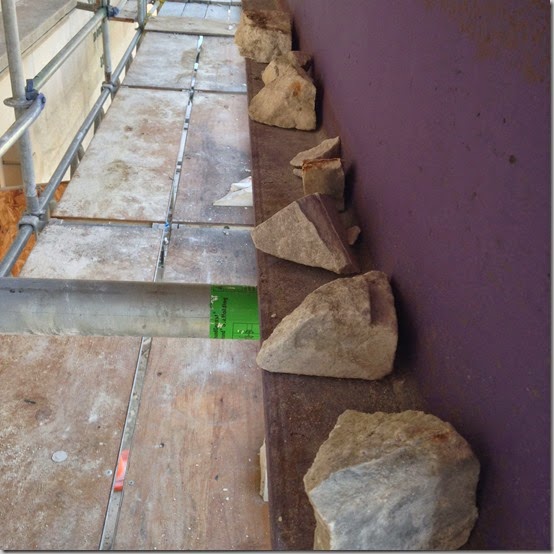 We headed into the base of the monument, where Lance told us that so much water was continually trapped behind the cement that had been applied in an earlier restoration, that the stone was always wet. 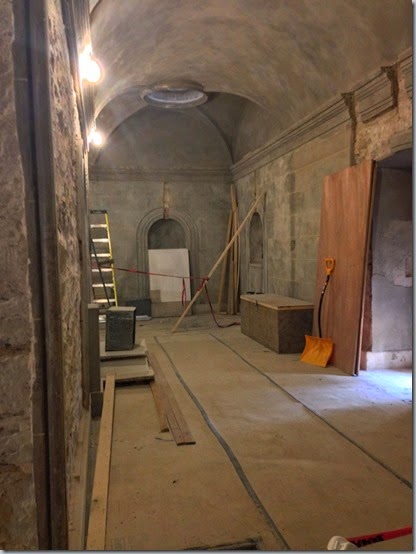 Three days after removing the cement, the stones dried out. 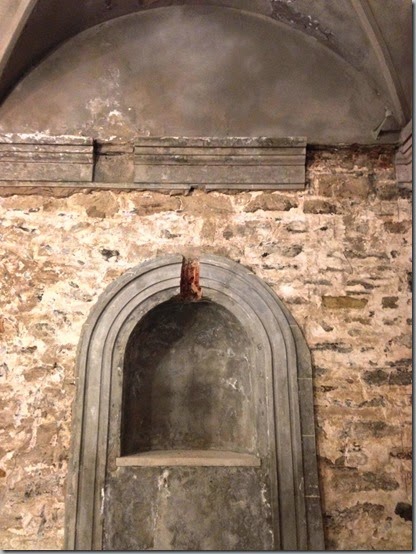 Only one of the niches had a permanent inhabitant, and that was a huge bust of George Washington, who has moved temporarily down the street to the Walters Art Museum. 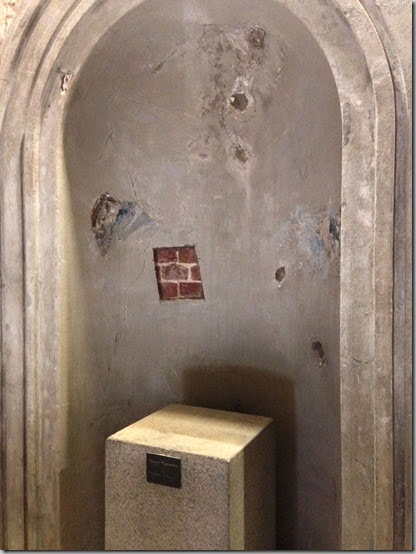 There’s no record of what was in the other niches.

We then headed down into the vaults beneath the monument where a series of arches provide the support for the structure above. 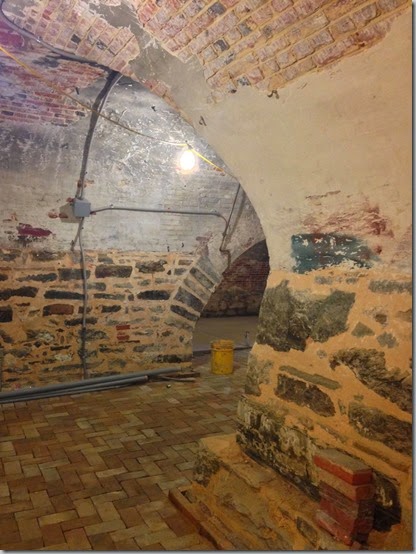 All of the brick- and stone-work had been covered with a plaster mix, but since it was in bad repair, it was removed… and signatures from 1819-1829 were revealed. The were likely scrawled by early visitors to the monument.

Now came the time of reckoning. Could I really go all the way to the top? If I had even the very slightest fear of heights (acrophobia), then I would never, ever have been able to do this jaunt. 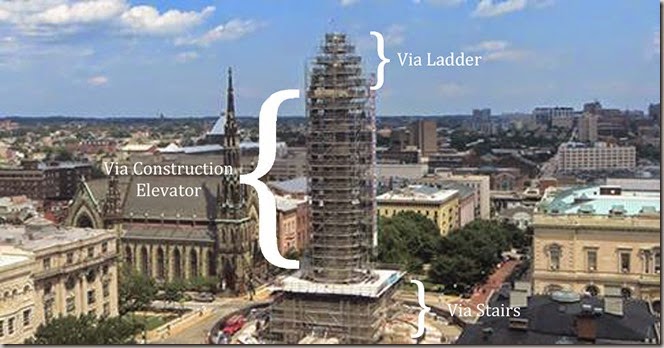 The base was just like going up two flights of stairs… no big deal, except they were punched steel, open to the elements. The second section, up the side of the tower was in a construction elevator. Think a big cage going up and landing with a major thunk at about 150 feet. The final section, the top and then the statue, were via LADDERS! Vertical ladders going up through hatches in the platform. It took a little finesse trying to figure out where to put your hands and feet, especially when the top half of you ran out of rungs to hold on to! 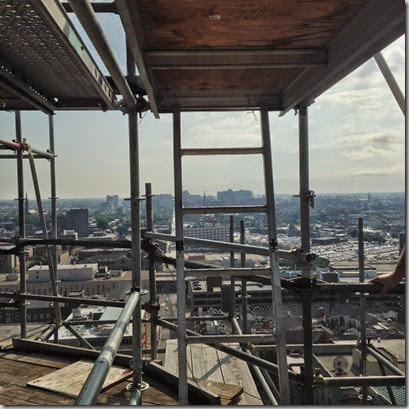 Honestly, what was even worse was going down and trying to locate the first rung, which you can’t see, with your foot, and then taking your hands off the railings when there are no rungs! OMG! But I did it! (I am hanging on because it’s breezy and the boards are uneven – I didn’t want to fall!) 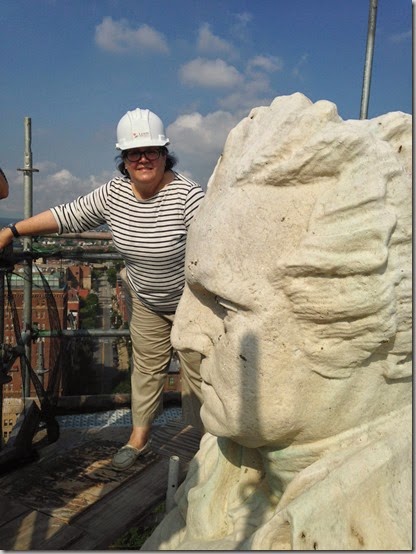 From each angle, the views were terrific. The monument is at the top of a hill in the center of four beautiful parks.

Looking south toward the Inner Harbor 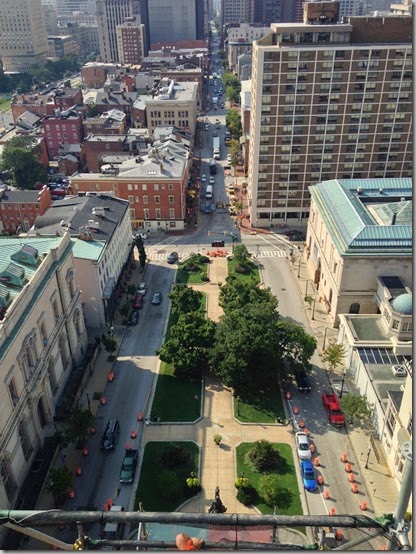 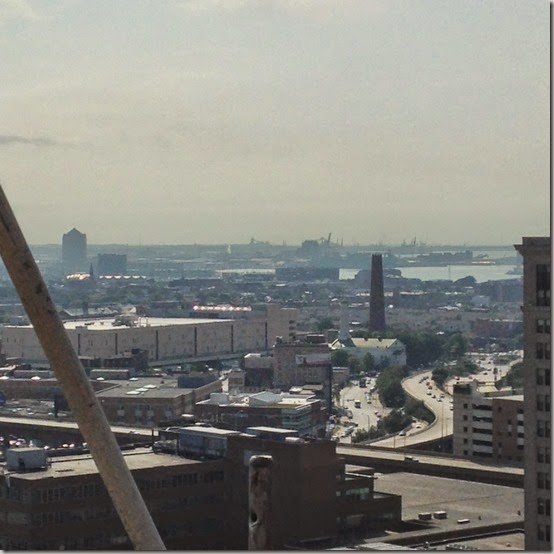 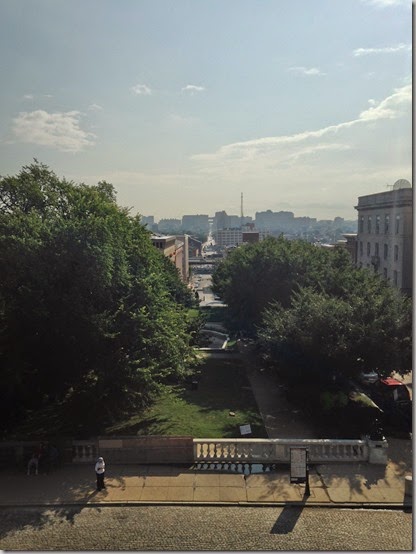 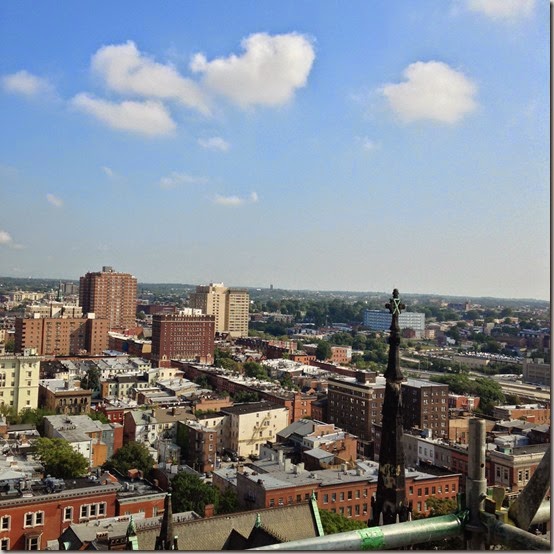 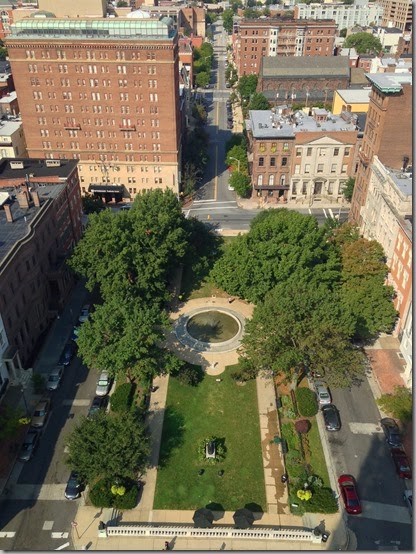 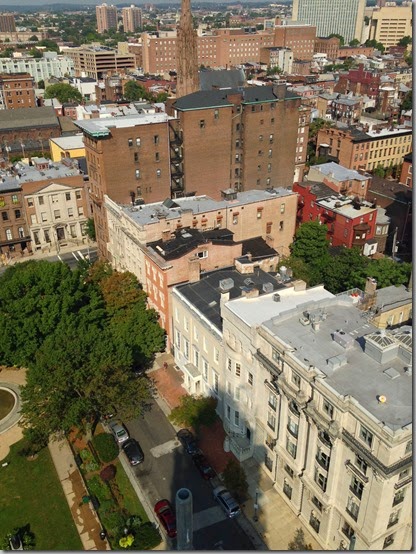 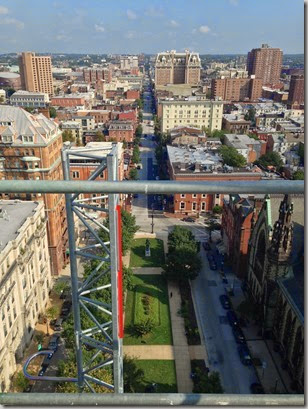 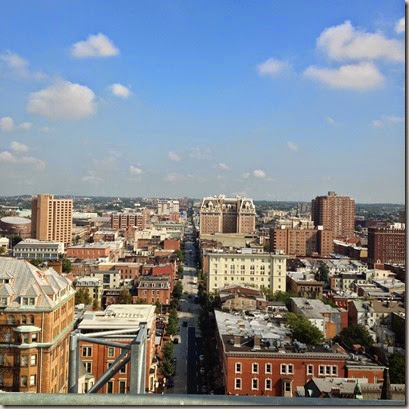 When we finally reached the top, I realized that it was worth it. Despite his age, George is in pretty good shape. He’s 16 feet high and was constructed in three pieces. Take a moment to realize that this was constructed in 1815, and how amazing it is that they were able to raise this marble statue 170 feet in the air! 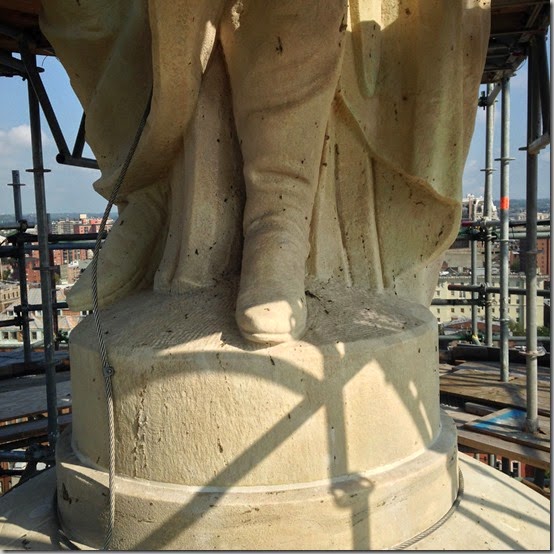 A lot of the detail has worn away, but much still remains. And most of it wouldn’t have been visible to a casual viewer in the 1800’s. 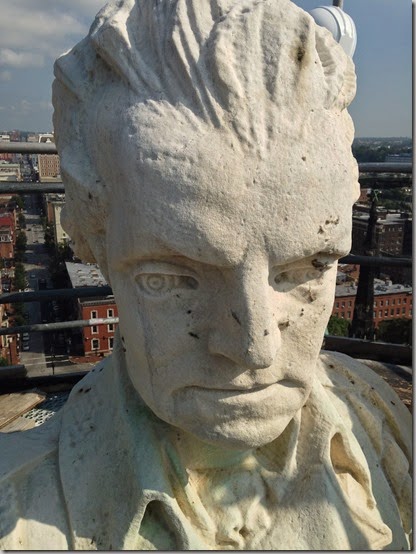 His eyes are very detailed, even down to the iris. 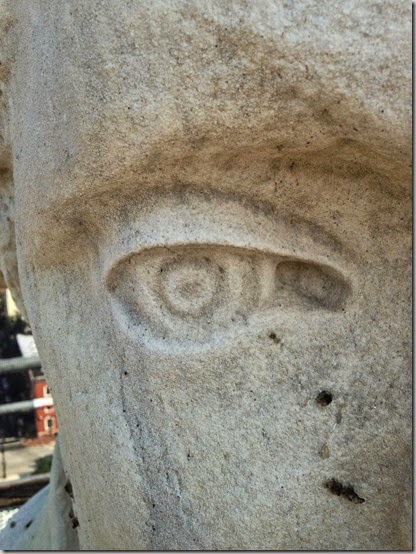 The top of his scroll would never have been seen, but it’s detailed all the same. 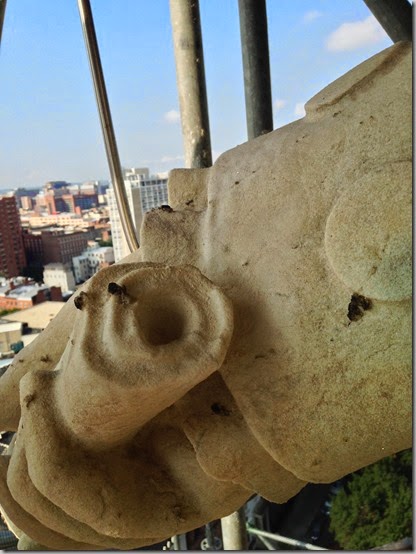 You can still see his fingernails, another detail that would have been unseen. 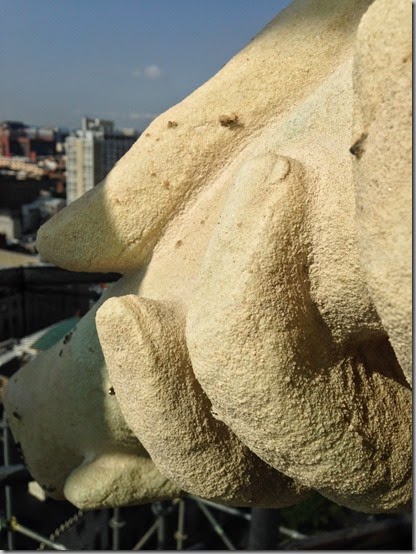 His epaulettes are also very detailed. 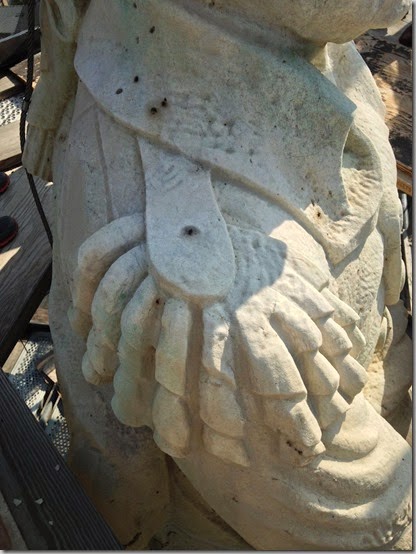 And his pony-tail or cue is also well-defined. That’s a lightning rod running down his back. Here are the buttons on his coat. 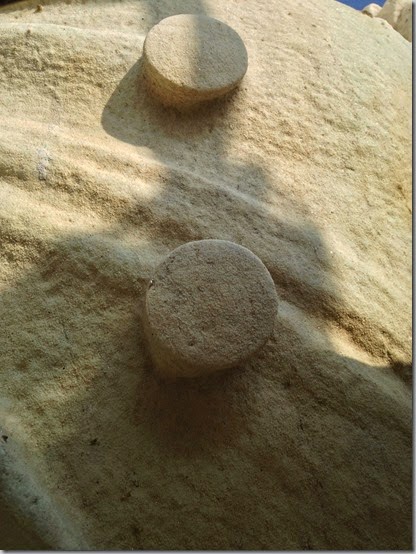 Thanks so much to Lance Humphries for leading us on the tour! 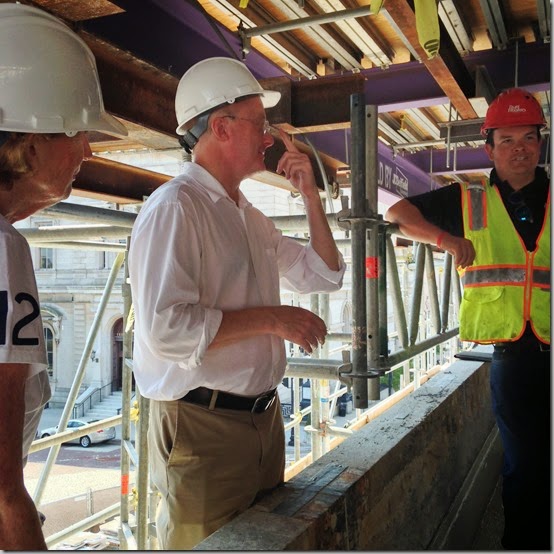 For more information or to make a contribution, please click here.