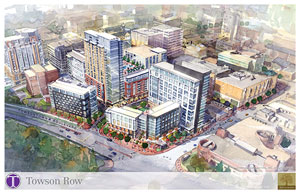 Baltimore County Executive Kevin Kamenetz  unveiled this week the concept for Towson Row, a $300 million mixed-use development at the southern gateway to downtown Towson, to be developed by Caves Valley Partners.

Towson Row will be built on five acres bordered by York Road, Towsontown Boulevard, and Chesapeake and Susquehanna Avenues.

Caves Valley Partners, a team of Baltimore County-based developers who recently completed the transformation of the former Investment Building into the now fully refurbished and fully leased Towson City Center, will own and manage Towson Row.

Towson Row Will Include:

“Towson can be every bit as vibrant and successful an urban center as places like Bethesda or Harbor East in downtown Baltimore,” said Arthur Adler, principal of Caves Valley Partners. “We think the timing of our acquisition coincides with Towson being on the upswing and ready for its positive transformation into an urban center.”

Caves Valley Partners expects to begin the development process later this year, with construction anticipated to start in 2015.

“Over $600 million in private investment is taking shape in downtown Towson in just the past three years,” continued Kamenetz. “When Towson Row is added to recent projects such as Towson City Center, residences at The Palisades and 101 YORK, and the Towson Square movies and restaurants, we can truly say ‘it’s Towson’s Time.’”

“Over the next few years, this promises to be a transformational project for downtown Towson,” said Councilman David Marks. “This is the private sector recognizing downtown Towson’s strengths and potential as a great place to live, work and play.”

“Towson Row’s private investment is projected to bring millions in property tax revenue to Baltimore County that allows us to improve our quality of life and support public safety, public education, and restore our aging infrastructure, while still maintaining a stable tax rate. It will also provide construction jobs and new employment opportunities for a generation,” said Kamenetz.