In many respects, Liam Gallihue lives the life of a normal high school sophomore. The Harford County resident, who will celebrate his 16th birthday in October, has a schedule packed with classes, homework, marching band, friends, tennis and a girlfriend.

But Liam is no average teen. On top of the regular demands of high school life, he also navigates the complicated and often scary world of living with cystic fibrosis.

Cystic fibrosis (CF), a progressive and genetic condition in which thick mucus in the lungs, pancreas and other organs leads to lung infections and makes it difficult to breathe, affects over 30,000 people in the United States.

Thanks to prenatal screening, Liam was diagnosed before he was born and was able to start treatment at Johns Hopkins Hospital immediately after birth. Hopkins’ research and treatment efforts related to CF are some of the best in the world, though the CF treatment landscape is still rife with unmet needs.

“We had researched everything before he was born,” says his mother, Suzi Gallihue. “When he was born, we started treating right away. He was taking pancreatic enzymes on day one and we started doing percussion PT on his back and chest two days in.”

As a child, Liam’s treatment was largely enzymes and physical therapy. However, a few years ago he got a persistent infection that reduced his lung function from about 80-90% to 43%; he hasn’t yet beaten it.

These days, his treatment starts before he even wakes up. Before 6 a.m., one of his parents gets up to mix and reconstitute a treatment that they then put in an IV and start to administer while he’s still sleeping. Once Liam gets out of bed to get ready for school, he continues his treatment, taking about a dozen pills, doing two inhaled nebulizers, taking Advair and albuterol, and doing physical therapy.

The treatment continues in the car on the way to school, where he uses an adapter to power his IV off the car’s cigarette lighter.

Once at school, he is off the IV, but once a week, a nurse visits the school to change the dressings on his implanted port. Once he gets back home, he takes another pill and mixes his liquid medication, which he administers again through the IV.

At night, he takes more inhaled antibiotics, Advair and albuterol and gets another IV, all before hooking himself up to a pump that will feed him about 2,000 calories through a tube while he sleeps. 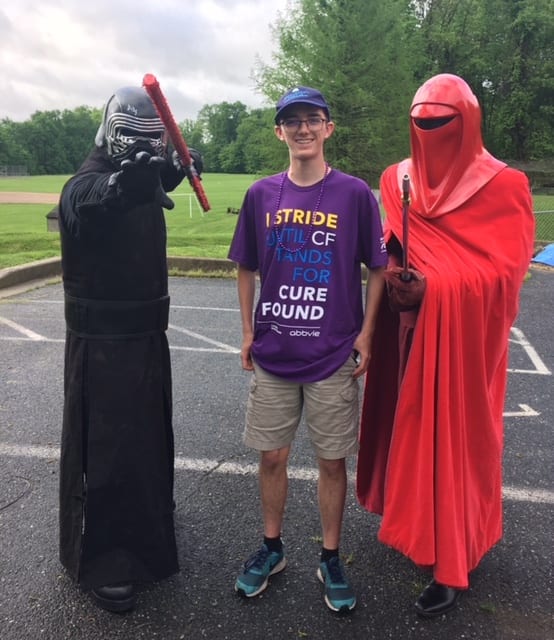 But all of that is a normal day, when he comes straight home from school. And as high school students and their parents are well aware, “normal” days can be few and far between.

“Everything is complicated,” says his mom. “For instance, if he wants to go to a field hockey game to see his friends play, he’s not going to come home from school, so how’s he going to get his 4 p.m. pill and IV? This means driving to a friend’s house so she can take it to him later because we have to keep it cool; we can’t leave it in the car where it will get hot.”

The Gallihue family has become experts at adapting, laughing about the “luggage” Liam requires to go places; they don’t let his condition get in the way of having an active social and school life.

For Liam, part of that “active” life involves giving back to the CF community. He and his family have been involved in fundraising and awareness efforts on behalf of the Cystic Fibrosis Foundation since he was a baby.

Since its founding in 1955, the Cystic Fibrosis Foundation has funded significant research into new treatment options for patients with CF. The Foundation’s support for treatment research has contributed to the approval of ten new drugs in the category; it is currently funding 40 programs to advance CF therapies.

This research has significant real-world implications for patients like Liam and their families. Sixty years ago, when the CF Foundation was founded, most CF patients died in childhood; today, the median age of survival is about 40 years old.

Fundraising efforts in the Baltimore region contribute to those improvements. The Foundation partners with people all over the country to host fundraising walks, dubbed Great Strides, as well as additional events throughout the year.

Here in Baltimore, Cystic Fibrosis Foundation’s annual Passion for Food & Wine fundraiser takes place Thursday, Sept. 20 at the Four Seasons Hotel in Harbor East. The fundraiser, now in its seventh year, features chefs from some of Baltimore’s top restaurants cooking directly for guests of the event. Passion for Food & Wine typically raises hundreds of thousands of dollars, which directly benefits patients with CF.

This year, Liam Gallihue will helm Team Liam in the Great Strides walk near his home; the team has been in place since he was a baby. He’s also involved in Passion for Food & Wine, as the star of a short video that will be played during the event.

For Liam, the research conducted by the CF Foundation could have very tangible implications. Though the most recently approved CF drugs are, unfortunately, not a fit for the particular mutation that caused Liam’s disease, there are multiple drugs in the pipeline being designed to combat the infection that has recently decreased his lung function.

“About five to seven percent of the community has this infection and they have many things in the pipeline right now to help it,” says Suzi Gallihue. “There are so many trials right now.”

The CF Foundation team likes to say that their goal is to change “CF” from an acronym for “cystic fibrosis” to one for “cure found.” The Gallihue family feels the same way, but until that day, Liam will continue living every day like a “normal” high school kid as much as he possibly can, all while promoting awareness of the good the foundation does for his community.