From Pigtown Design – About 15 years ago, I was sitting in a bland conference room, in a meeting of the Board of Directors of the Friends of Fort McHenry. We were speculating about the 200th anniversary of the writing of the National Anthem in 2014. At that time, 2014 seemed so far away, but we knew the planning had to start then, and that everything would culminate over the weekend of September 12-14, 2014.

The time is nigh. 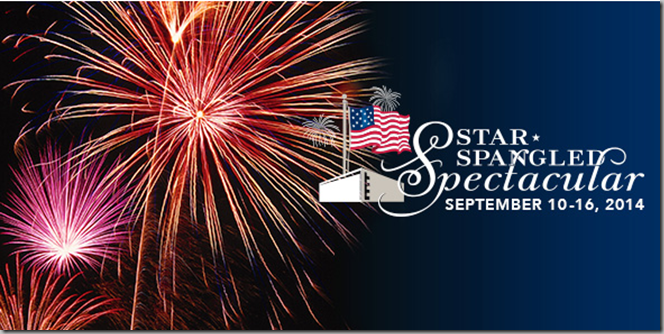 Two years ago, Star-Spangled 200 was launched with the Star-Spangled Sailabration, when dozens of tall ships, battleships and other sea-faring vessels arrived in Baltimore for a weekend celebration. You can read about it here, here and here. 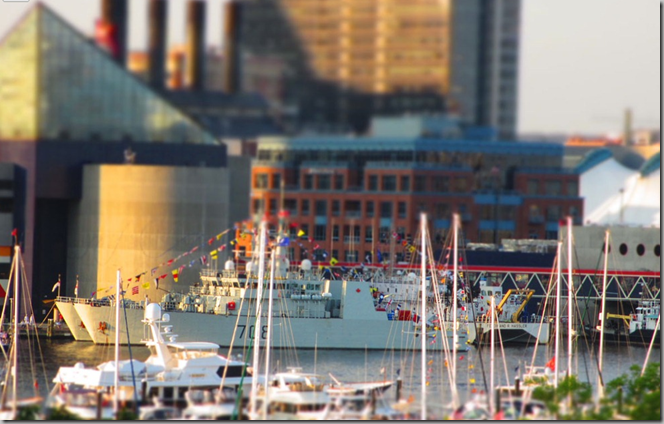 The next week will be filled with amazing events, from the arrival of the tall ships, to the spectacular aerial acrobatics of the Blue Angels, to the mock battle that will take place over 25 hours, to a massive fireworks display lighting up the Inner Harbour, to the raising of the flag, exactly 200 years to the hour, after Francis Scott Key first spotted it in the distance.

Here are some other things I am excited about.

Today, more than 6,000 children gathered, for the 100th year, to create a living flag at Fort McHenry. 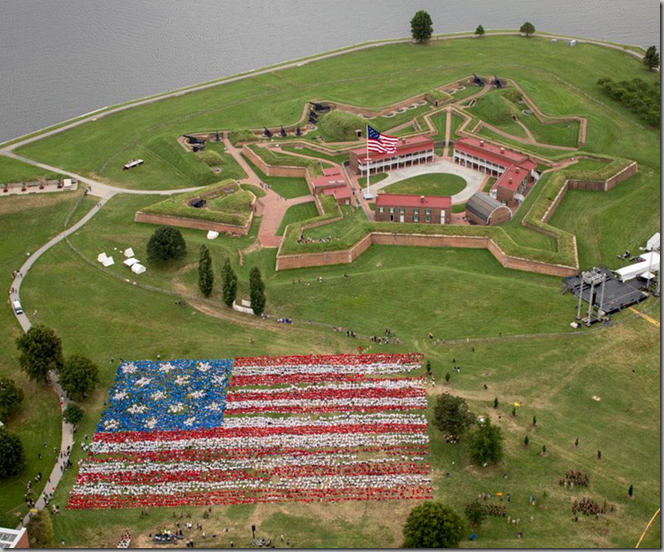 Local company, Under Armour, has kitted out the University of Maryland’s football team in uniforms with the Star-Spangled banner’s original words printed on them. The captains will wear red belts, as did the captains in the War of 1812 did. 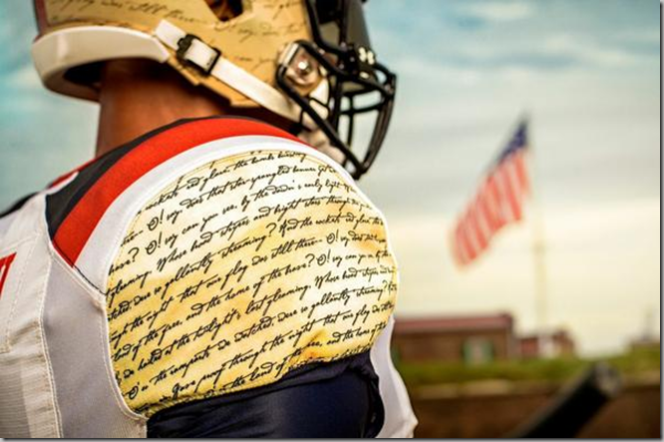 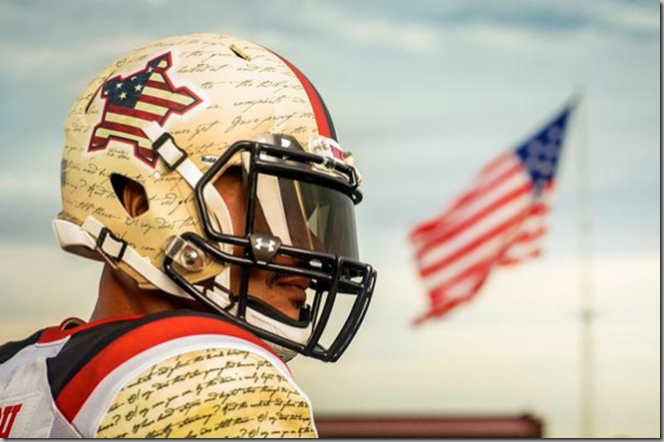 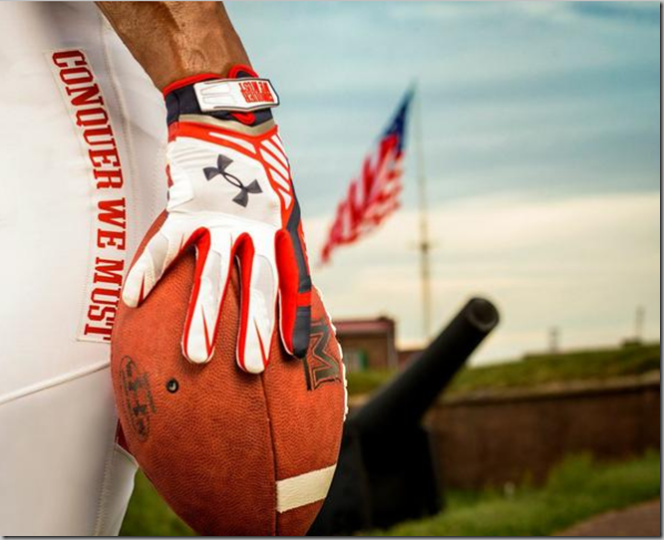 They have added 15-star and 15-stripe flags to the top of the Washington Monument. Notice that on these flags, the blue field rests atop a red stripe. This is the only version in which this happens. 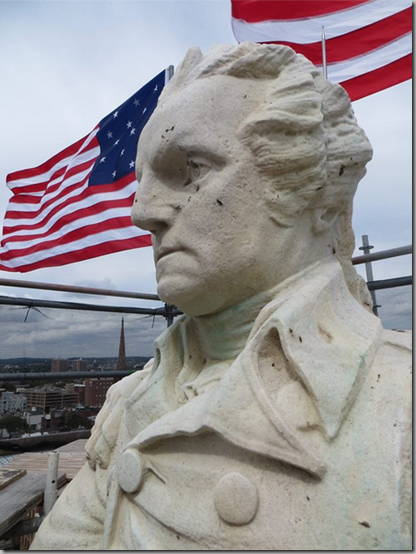 The Blue Angels will be flying again. Last time, I saw them twice. I am going to try to see them all four times they fly this time! 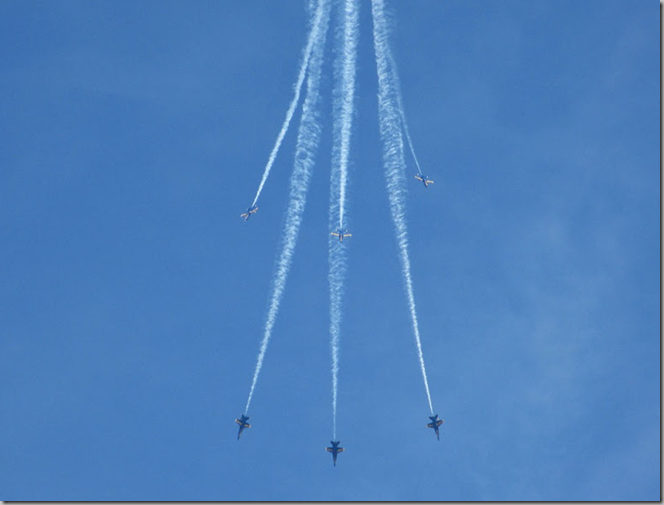 By the Dawn’s Early Light flag-raising ceremony. The flag will be raised at the exact time that Francis Scott Key saw it after the Battle of Baltimore. I am not hugely patriotic, but seeing this flag  over the actual ramparts, as you sing the anthem, does me in. 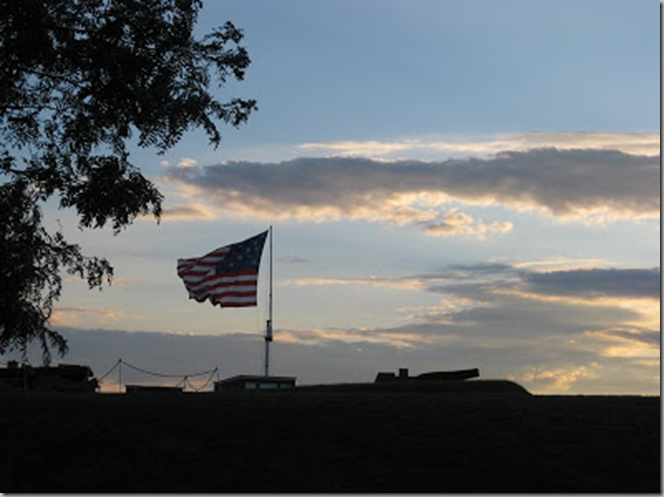 The original manuscript of the National Anthem will be on display at Fort McHenry for the first time in decades. 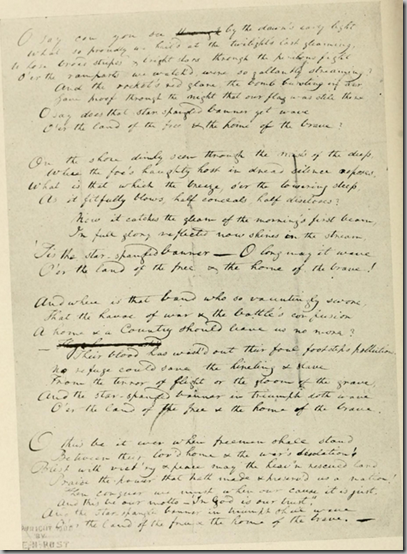 The words to the anthem are essentially a question that’s asked in the first verse and answered in the subsequent three verses. At our lecture on the writing of the anthem at work, we started the event with by singing the first and at the end, sang the last verse, which is my favorite.

O say can you see, by the dawn’s early light,
What so proudly we hail’d at the twilight’s last gleaming,
Whose broad stripes and bright stars through the perilous fight
O’er the ramparts we watch’d were so gallantly streaming?
And the rocket’s red glare, the bombs bursting in air,
Gave proof through the night that our flag was still there,
O say does that star-spangled banner yet wave
O’er the land of the free and the home of the brave?

On the shore dimly seen through the mists of the deep
Where the foe’s haughty host in dread silence reposes,
What is that which the breeze, o’er the towering steep,
As it fitfully blows, half conceals, half discloses?
Now it catches the gleam of the morning’s first beam,
In full glory reflected now shines in the stream,
’Tis the star-spangled banner – O long may it wave
O’er the land of the free and the home of the brave!

And where is that band who so vauntingly swore,
That the havoc of war and the battle’s confusion
A home and a Country should leave us no more?
Their blood has wash’d out their foul footstep’s pollution.
No refuge could save the hireling and slave
From the terror of flight or the gloom of the grave,
And the star-spangled banner in triumph doth wave
O’er the land of the free and the home of the brave.

O thus be it ever when freemen shall stand
Between their lov’d home and the war’s desolation!
Blest with vict’ry and peace may the heav’n rescued land
Praise the power that hath made and preserv’d us a nation!
Then conquer we must, when our cause it is just,
And this be our motto – “In God is our trust,”
And the star-spangled banner in triumph shall wave
O’er the land of the free and the home of the brave. 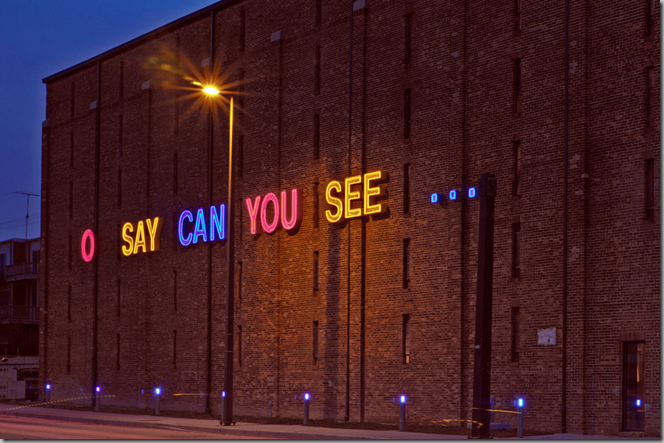 My sincerest congratulations to all of my friends, including former fellow board members, the staff at Fort McHenry, Star-Spangled 200 and everyone else who has worked so hard for so many years to present this event, the largest in Baltimore’s history. I am so proud of all you’ve done! THIS is Baltimore!