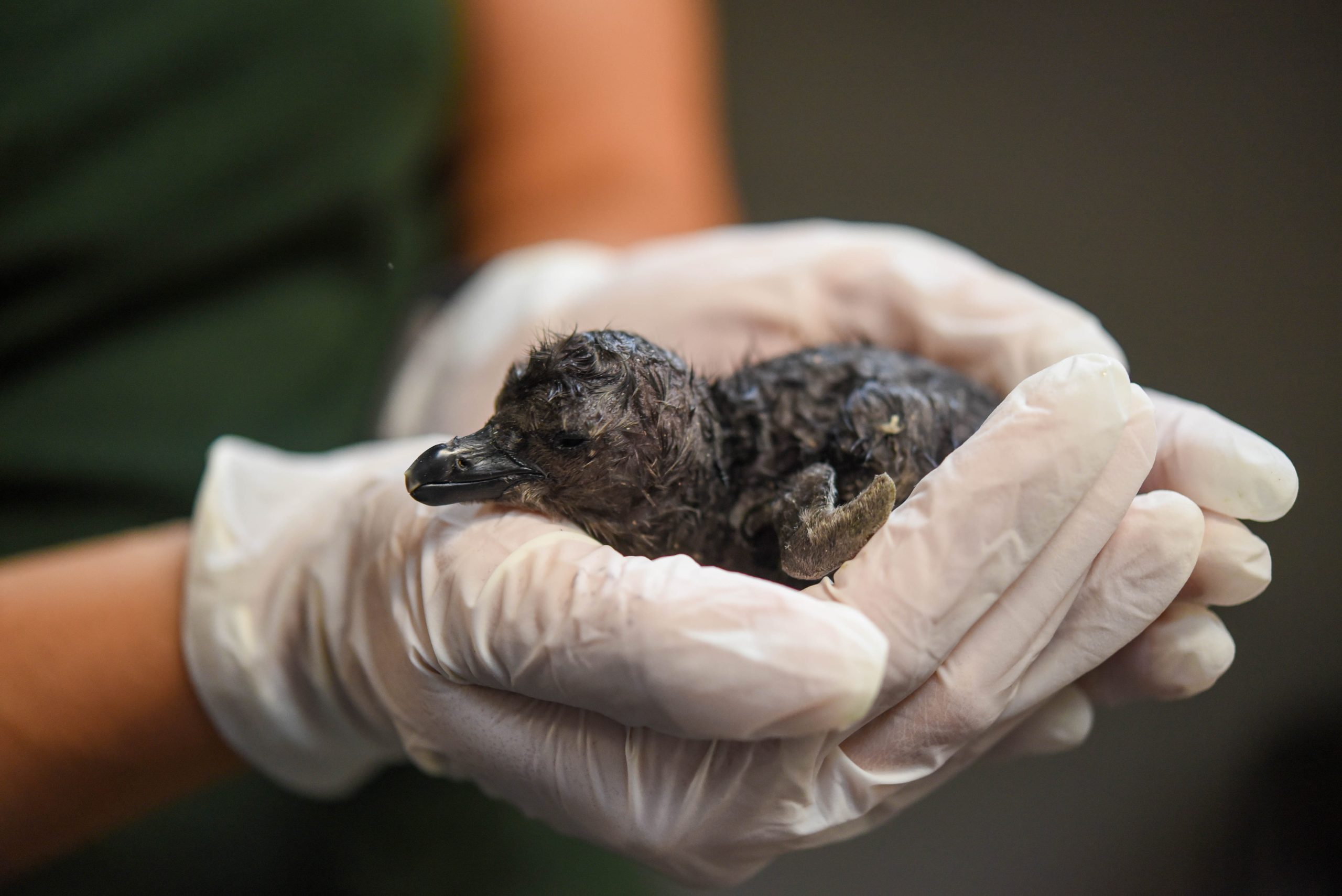 Three African penguin chicks — the first to hatch during the 2020-2021 breeding season — have hatched at the Maryland Zoo, the organization announced today. The chicks hatched on September 18th, September 22nd and October 4th.

“It’s amazing to me that we are in our 53rd year working with African penguins. We are always excited to watch the colony grow each year, and happy to announce that three chicks have hatched already this breeding season,” said Jen Kottyan, avian collection and conservation manager. “We expect to hatch 10 chicks during this breeding season, but of course that is all dependent on the penguins.”

Penguin breeding recommendations are made by the Association of Zoos and Aquariums’ (AZA) African Penguin Species Survival Plan (SSP). Breeding season for the African penguins (Spheniscus demersus) at Penguin Coast, the African penguin exhibit at the zoo, began in mid-August this year and will last until the end of February.

“Right now it is spring in South Africa, when these penguins would normally begin breeding in their colonies,” continued Kottyan. “Although it is fall here, we like to mimic the breeding season so we can monitor the chicks as they hatch and grow during our winter, and then they make their debut as juveniles when temperatures warm up in April.”

Penguin chicks hatch 38-42 days after the eggs are laid. The Penguin Coast team monitors development of the eggs by candling them about a week after they are laid to check fertility and ensure the chick is growing. The eggs are then returned to the parents.

“With African penguins, both the male and the female take turns incubating the eggs,” said Kottyan. “Once the eggs hatch, parents take turns caring for their offspring; they each protect, feed, and keep the chick warm for 2-3 days and then switch off.”

At Penguin Coast, chicks stay with their parents for about three weeks after they hatch and are fed regurgitated fish from their parents. During this time, the animal care team and veterinarians keep a close eye on the development of the chicks, weighing and measuring them every few days to make sure that the parents are properly caring for each chick. When a chick is three-weeks-old, the team removes it from the nest, and starts to teach the chick that they are the source of food. This step is critical as it will allow staff to provide long term care for the birds including daily feeding, regular health exams and both routine and emergency medical care.

When they first hatch, chicks are about the size of a human palm. Covered in dark gray downy feathers, the chicks grow fast. They reach their full size, about six pounds, around three months of age. At the same time, their fluffy down is finished being replaced by waterproof feathers.

While the penguin chicks are not viewable to the public, juvenile and adult penguins can be seen at Penguin Coast. Penguin Feeding programs are offered twice daily, free with admission, and Penguin Encounters are offered throughout the year for an additional fee.

The Maryland Zoo has the largest colony of African penguins in North America with 104 birds, including the newest hatchlings. African penguins are extremely endangered. The 2019 penguin census showed another dramatic decline in South Africa, with approximately 13,500 pairs, a loss of 2,000 pairs from 2018. The global population, which includes Namibia, is now around 18,500 pairs, down from well over 2 million pairs in the 1920s, which is a 99.2% decline over the past 100 years.

For updates on the chicks in the coming weeks, please visit www.marylandzoo.org or our www.facebook.com/marylandzoo.