Along the Patapsco by Rafael Alvarez

Nine innings of a grandfather’s angst

Not long ago, my daughter Sofia was pulling her soon-to-be four-year-old son in a wagon down a street in Brooklyn, New York.

Gus – currently obsessed with all things prehistoric – was wearing a cartoon bird Orioles baseball cap courtesy of yours truly. I’ve been a die-hard Birds fan since the home team swept the Los Angeles Dodgers in the 1966 World Series when I was not much older than Gus is now. In the natural world, this is called “imprinting.”

END_OF_DOCUMENT_TOKEN_TO_BE_REPLACED

The batter should bubble a bit as it rises, a thin dough wrapped around anchovies and deep fried in vegetable oil until golden brown, fished out with a slotted spoon and placed on a paper towel. Best enjoyed hot.

An Italian Christmastime favorite, my family calls them “aleesh cakes.” Like so many other words common in ethnic American families, it doesn’t translate into anything. The Italian word for anchovy is acciughe. How did that devolve into aleesh in Roaring 20s Highlandtown? I only know that they are delicious.

END_OF_DOCUMENT_TOKEN_TO_BE_REPLACED

Lois Feinblatt: An ‘ebullient driving wheel for the public good’

For more than three years,  beginning in February 2016, I arrived at Lois Feinblatt’s apartment near Johns Hopkins University to poke into every corner of her long and fascinating life. No question was considered too impertinent. Not that she answered all of them.

“I don’t see why that’s important,” she’d say as I took notes at the kitchen table.

Born a Hoffberger – the indelibly Baltimore family of ice, heating oil, beer and baseball – Lois died at home on April 15, a month before her 101st birthday. Vibrant nearly to the end, she confided to her intimates (of which there were dozens, many believing they were in closer orbit than was the case) that making it to 101 was not imperative.

END_OF_DOCUMENT_TOKEN_TO_BE_REPLACED

Poetry in Greektown, a place of roosters and rainbows

In the midst of an evening of poetry, storytelling, garbanzo bean salad and rice pudding at Karella’s on Newkirk Street in southeast Baltimore, a young Latina ran out of her rowhouse in pursuit of a rooster. As it jumped the curb and into the brick street, she swooped down and grabbed the cock by the neck. Pet bird safely in her arms, the girl smiled at the writers who’d come out to applaud and went inside.

It was one of those “only in Baltimore” moments, reminding me of good times once had at Miss Bonnie’s Elvis Bar (now an ugly, renovated private home) at the corner of Fleet and Port streets below Patterson Park. Miss Bonnie – Alabama-born Lavonda Hunt; barmaid, proprietor and sole resident of Graceland on the Patapsco – indulged us mightily in the late 1980s.

END_OF_DOCUMENT_TOKEN_TO_BE_REPLACED

“Don’t tell me, goddammit, I was there…” -An old soldier’s battle cry

Wiley Edward Asberry was a quiet man who, at the end of his life about a year ago, made his final goodbye by speaking with his ears. Retired from the General Motors plant on Broening Highway, the longtime Yale Heights resident was 94. By the time his heart gave out on June 4, 2021, the World War II Army veteran was living in a nursing home near Gettysburg, Pa.

END_OF_DOCUMENT_TOKEN_TO_BE_REPLACED

The people closest to Evelyn Taylor knew that she’d had a hard life. It was a long one – she died this past March at age 94 – and, as a Baltimorean from birth, most colorful.

Her father, a day laborer named John Henry Meyers, once scolded her for picking tomatoes for pennies on a farm near their Debelius Avenue home in Orangeville, a salt-shaker in her pocket to savor a love apple or two while going down the rows.

END_OF_DOCUMENT_TOKEN_TO_BE_REPLACED

I spent a long week in Tinseltown last month visiting my daughter Amelia and her family. She is a graduate of the Baltimore School for the Arts, an actress and the mother of a toddler named Lake.

END_OF_DOCUMENT_TOKEN_TO_BE_REPLACED

A strong woman and a family’s history

My mother’s mother – Anna Potter Jones – spent her entire 84 years in the same house at 2729 Dillon Street in Canton. She was born in the house by midwife and in 1996 had a fatal heart attack there.

END_OF_DOCUMENT_TOKEN_TO_BE_REPLACED 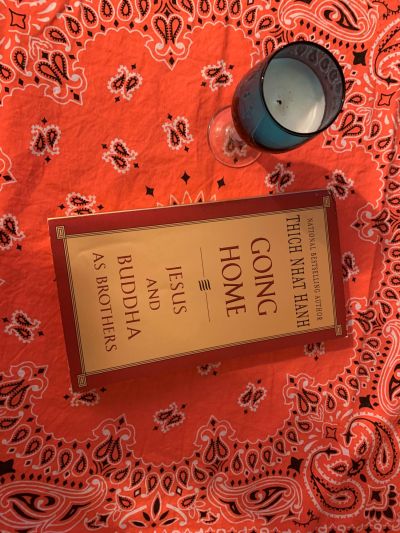 Gary Slutkin was about to cry on the phone. An epidemiologist renowned for his work identifying violence as a contagious disease and efforts to curb it, Slutkin paused while talking about Thich Nhat Hanh, the Vietnamese Buddhist monk who died January 22 at age 95.

“He was so sweet, just so damn sweet,” said Slutkin from his home in Chicago. “He’ll go down in history as one of the world’s great teachers.”

The Zen master’s message? The usual top of the mountain stuff sought by people – typically Westerners, many, many thousands of them – lost in the trenches of modern life: Slow down, be still, let go, just be.

END_OF_DOCUMENT_TOKEN_TO_BE_REPLACED

Lessons on writing, one vendor at a time: A student learns a craft at Lexington Market

Now and again, a young person with dreams of becoming a writer (not PR, not tech, not “content,” but vocation with a capital V – a calling) comes to me for advice.

So, you want to be a rock and roll star? They always do. The lyrics to the song of that name advise wanna-bes to “take some time and learn how to play.” And be it the electric guitar or electric typewriter, it takes more time than most beginners are willing to sacrifice.

END_OF_DOCUMENT_TOKEN_TO_BE_REPLACED

All Roads Lead to Once Upon a Time

My father has now been gone about five months and my mother talks aloud to his portrait throughout the day; narrating whatever is going on (oatmeal for breakfast, time for a nap, a neighbor’s visit) like a play-by-play announcer describing a game with two people in the stands.

END_OF_DOCUMENT_TOKEN_TO_BE_REPLACED

There is an extraordinary woman in Baltimore passing unnoticed among us. A musician celebrated here and there around the world for eccentric songs written and recorded at her modest home off of York Road near Belvedere Square.

END_OF_DOCUMENT_TOKEN_TO_BE_REPLACED

One of my dearest friends was a man named Chuck Donofrio, a Baltimore mystic who moonlighted as an advertising executive and passed quiet hours watching for birds. Of the many things I learned from Chuck — usually as we sat on a curb downtown somewhere like a couple of kids — is that truth can be found in our earliest memories.

I have two abiding memories from way back when: One with my mother from the age of three (she was crying and wouldn’t tell me why) and, two years later in 1963, a moment alongside my father.

In honor of his passing this past August 8th, I share the truth embedded in my earliest memory of Manuel Alvarez.

END_OF_DOCUMENT_TOKEN_TO_BE_REPLACED

Albert Joseph DeFelice, a 93-year-old drummer born and raised in Highlandtown, was enjoying a couple of hot dogs with chili, onion and mustard last month in the old neighborhood. He sat at a green, Formica-topped booth near the back of the G&A, the Greek diner at the corner of Eastern Avenue and Eaton street famous since 1927 for wieners of the Coney Island variety.

The narrow storefront was standing-room-only, a mid-July gathering filling every booth and stool. Such crowds were common when DeFelice was a teenager between the Great Depression and World War II. Business pretty much stayed that way through the 1970s.

END_OF_DOCUMENT_TOKEN_TO_BE_REPLACED

When Donnie Rideoutt was 12 years old, he stood in the winner’s circle at Pimlico with his Dad and a horse owned by his step-mother. It was late November, 1964 and the triumphant steed was KI-D-KA, named for Rideoutt and his sisters: Kym-Donnie-Kathy.

“I didn’t get into this business because I wanted to,” said Rideoutt, 68, feeding a carrot to a bay filly named Ask Nicely last month at Pimlico. “I got into it because my father owned horses. He came up with horses and I came up behind him. There wasn’t a choice about it.”

Donnie has been around racetracks all his life and began doing stable chores when Eisenhower graciously stepped aside for Kennedy. He’s still at it, doing whatever needs to be done at tracks around the state.