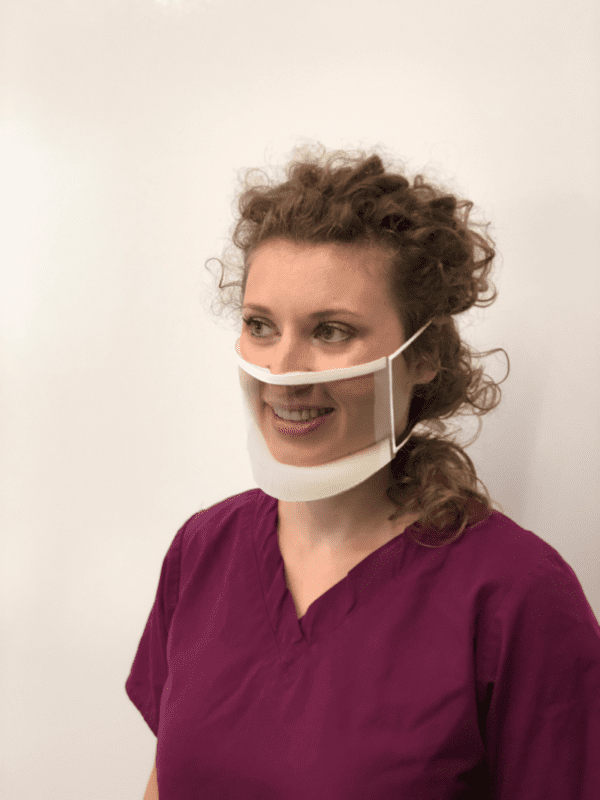 When a team of Johns Hopkins grad students and alumni began building ClearMask in late 2017, they saw the need for a face mask that was transparent.

Cofounder Allysa Dittmar, who is deaf, had been left isolated and unable to communicate before a medical procedure when she couldn’t understand the medical pros talking behind their masks.

So it was apparent to the team then that a mask that allowed folks to see faces could help deaf and hard of hearing individuals read lips and see faces. And the team also talked about how it could help many groups of patients.

So they set out to bring a mask to market. The startup took part in Baltimore accelerators, like Johns Hopkins’ Social Innovation Lab and ETC’s AccelerateBaltimore, which offered guidance as well as some funding. Moving through R&D to testing the product in the loop of feedback and adjustment in which so many startups partake, it set out on a pathway to regulatory clearance, with human studies continuing through last fall.

In April, the company received clearance as a medical device from the U.S. Food and Drug Administration.

It’s a crucial milestone. But by that time, the company was already in the throes of ramping up for its next phase. A few weeks before regulatory approval was granted, the COVID-19 pandemic arrived in the U.S. Seemingly overnight, masks were at the front of the conversation. The value of having a face covering that still showed a face was recognized not just for the deaf and hard of hearing in medical facilities, but also for older patients and children. It has also shipped orders to other kinds of settings like retail, restaurants and schools. Suddenly, the benefits of the mask — the ability to more clearly understand what folks are saying and pick up more readily on nonverbal cues — became relevant for everyone.