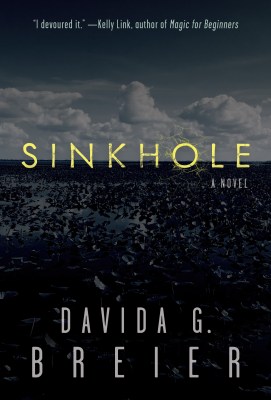 With a plot as thick as the wet, humid Florida air and as many twists as a winding country road, Davida Breier’s Sinkhole is a coming-of-age story about home, friendship, identity and grief. A web of lies both past and present, as well as an unexplained death, possibly a murder, have Michelle Miller tangled up in a mess as she drives slowly south to face the people and the place she left behind 15 years ago, never looking back. But what awaits her in Lorida, Florida, after all these years?

Breier’s dark, suspenseful debut novel takes us to a part of Florida unknown to many readers, a wild, untamed natural wonderland of flora and fauna, lovebugs and orchids, beautiful and dangerous at the same time. A place where little white lies grow into grand illusions. There are things to love and things to fear about the place, including reconnecting with the friends and family she left behind all those years ago. With her mother in the hospital, she can no longer simply avoid her past. As Publisher’s Weekly put it, “a clever plot and astute characterizations help drive this coming-of-age tale with a malevolent twist.”

Though she has been living in the Baltimore area for the past two decades, in her fiction Breier brings to life the lush, intense Florida of her youth. I spoke to Breier about the novel earlier this month. The following interview has been edited for length and clarity.

Baltimore Fishbowl: Where did the idea for this story come from?

Davida Breier: Over the course of my life I had interacted with people who — well, you could see how damaging their personalities were. I started with the basic idea “I wonder what those people looked like as teens?” Because there’s this notion that teenagers are naturally selfish, but at what point does that become an abusive component of someone’s personality? What would this look like interpersonally? Who are these people? I have known people who don’t even see or the damage they do, or the damage that’s been done to them.

How does this play out in the book?

BFB: Michelle, her family, and her friend Morrison are what I would call the “working poor.” They don’t have a lot of money but they clearly care for each other, they are doing their best for each other.

DB: It is one of my big pet peeves when a character is supposed to be poor but then they live in this great apartment, or they have access to whatever they need to further the story. You know, like, ‘I’m in a mystery, I have a problem, suddenly I have a credit card I can take a flight the next day.’ At that point it becomes evident to me that the writer never experienced financial deprivation of any kind. I don’t think we see enough plot lines where gas money is simply a barrier.

The flip side of that is that poor characters that are so often othered. They’re either to be pitied, or they are potentially threatening.

BFB:Sinkhole is set in the wonderfully named Lorida, Florida. The state itself is a major character in the book.

DB: I have a lot of issues politically with the state of Florida, but I have a lot of love for its wildness. I grew up in south Florida in the 1980s, and due to chronic overdevelopment, places I knew as wooded were within 10 years completely paved over. Turns out, the people are much more dangerous than the animals.

While I was working on the book, I took a trip down to Lorida, and it actually still is that old, wild version of the state, where you can see llamas and alligators, practically side by side, along with cows and turkeys and lizards. There’s a richness to that that I feel is often underappreciated. It’s more often mocked, and people try to control that aspect of Florida.

BFB: I loved your descriptions of how Michelle felt when she was swimming. Swimming was such a release for her; no matter what else was going on in her life that was a place where she felt whole and in control. Does swimming play that role in your own life?

DB: Yes! I love the water, and miss the water and the ocean so much, since I haven’t been able to see much of it since COVID started. I even got my open water dive certification about two months before the pandemic started!

BFB: Wow! You have to get back out there!

BFB: You’ve been living in Maryland for twenty years now. Do you feel you’ve bonded with the natural environment here? Is that reflected in your writing?

DB: There is a stretch of road and small area of state park lands near where I live that has very much influenced my writing and connected me to the land here. At the start of the pandemic, Patrick, my husband, and I had to get out of the house burn off some of the anxiety. We discovered this canopied stretch of road and found out that the lands on one side were public lands. We’ve spent the last two years walking in those woods, finding frogs, deer, turkeys, salamanders, and more. We also found old structures and would speculate on who lived there and when. During those walks, I would talk about about the book and work through scenes. So while the book is set in Lorida, much of the development happened in Gunpowder Falls State Park.

BFB: What are you working on now?

DB: I’ve started working on a second book. Right now it is mostly notes and rudimentary character sketches. I’ve been hyper-focused on Sinkhole, but once it launches, I am ready to start talking to new imaginary people in my head.

Davida will be celebrating the launch of Sinkhole with a reading, signing, and conversation with Patrick Tandy on May 26 at 7 pm at Atomic Books, 3620 Falls Road in Hampden. 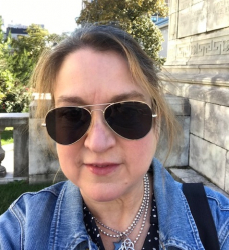 Lisa Morgan
Lisa Morgan is a radio host and content producer and co-host of The Weekly Reader on WYPR.