From Pigtown Design – If you’ve been reading Pigtown*Design for any length of time, you know that I am a big booster of Baltimore, my home town. This weekend gave me so much more to be proud of with the celebrations for the 200th Anniversary of the writing of the Star-Spangled Banner, our national anthem. There were loads of events happening in and around Baltimore, on the land, in the sea and in the air. I managed to take advantage of all three!

Friday started out by leaving the office at noon to join one of my best friends for drinks and lunch at the Four Seasons, which is right on the waterfront. We knew that the Blue Angels would be practicing in the afternoon, so we had a front row seat for that, and for watching the ships sail by. The one above is Pride of Baltimore II and is a gorgeous ship!

It was so exciting to see the Blue Angels swooping and zooming by us and they looked like they were having such fun! They are so fast that they move faster than the speed of sound, so you see them before you hear them, and they can actually sneak up on you! 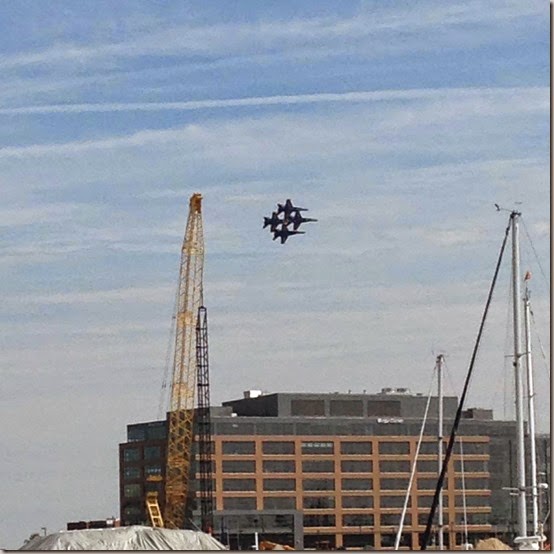 At times, they fly so close to each other that their wings are only 18 inches apart. It’s equally thrilling and a little scary! 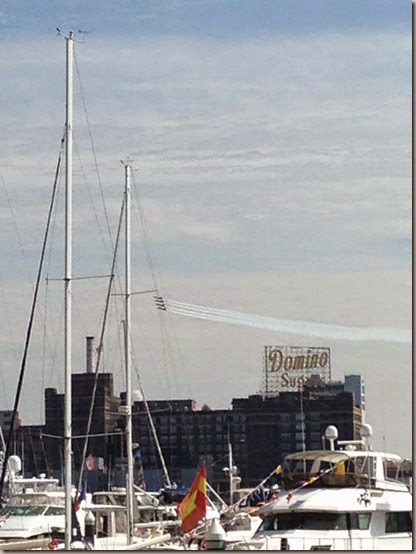 Saturday started out with some rain, but all reports said it would move out by 3:00 and sure enough, it did! We headed down to the harbour and had a chance to look at some of the tall ships that were visiting for the Star-Spangled 200 celebrations. Luckily, I had the perfect shirt to wear! 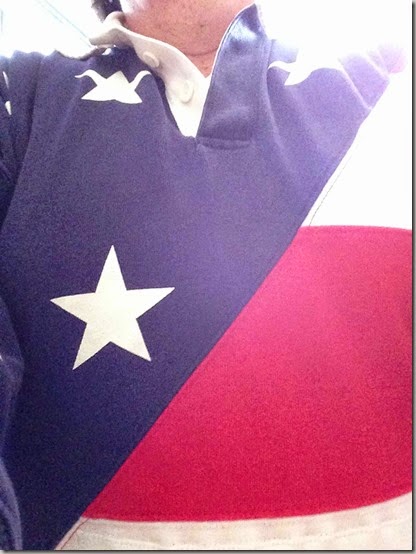 Each of the tall ships that we saw were impressive in their own way, from the masthead to the rigging.

Just before sunset, we hopped on a boat and headed out of the Inner Harbour. The sky was just gorgeous and provided lots of opportunities for pictures! 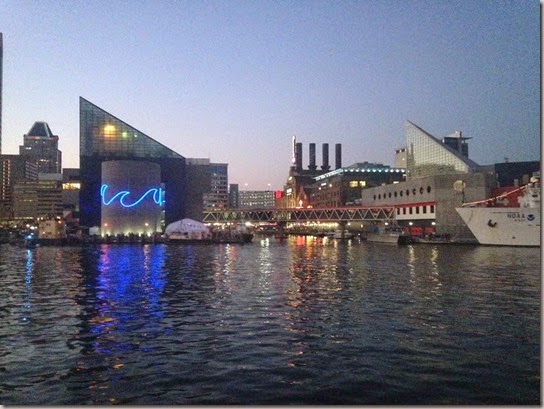 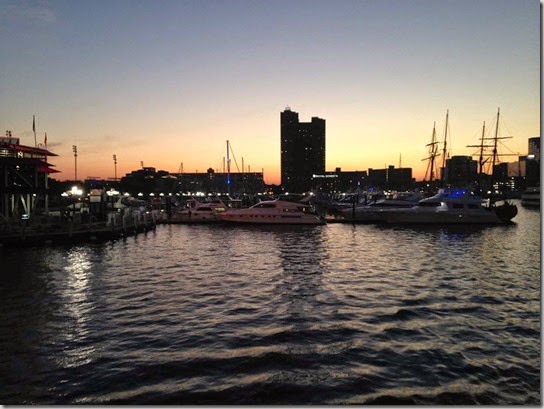 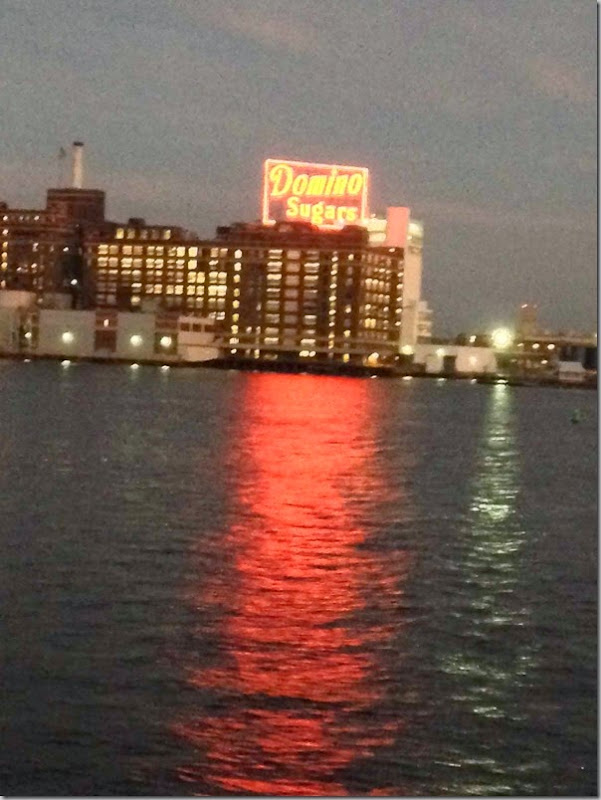 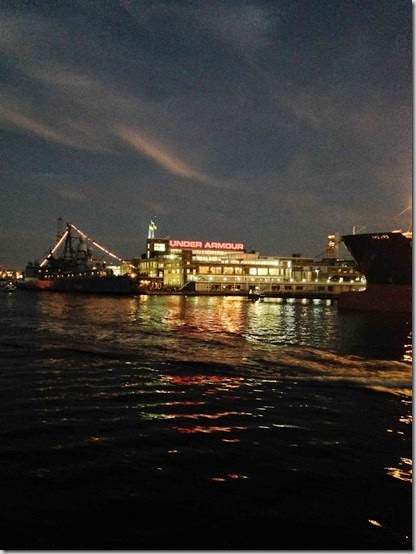 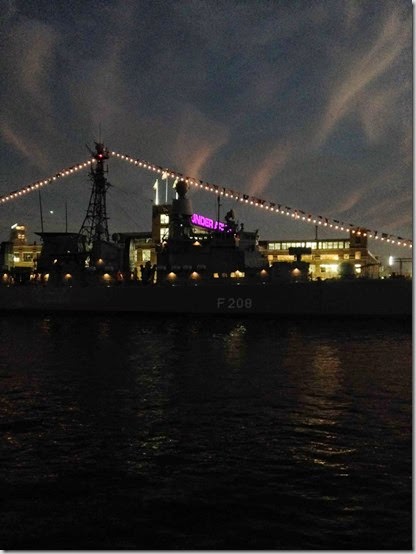 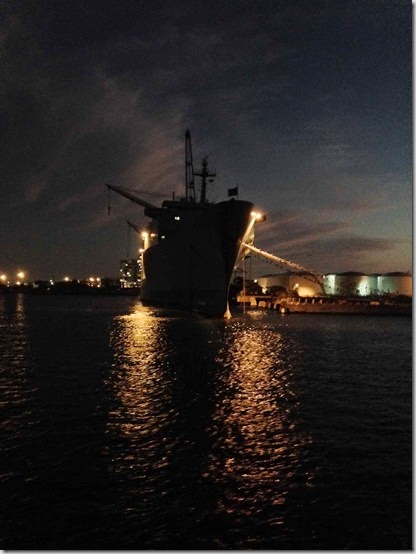 When we finally reached the cove where we moored, we waited in anticipation of the fireworks. On the way out, we’d seen the barges that they would be shot from, and there was a barge about every half mile.

And then with a huge bang, the fireworks started! 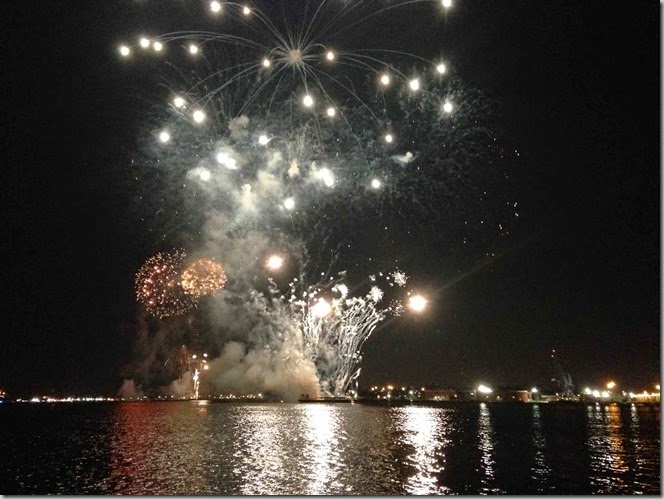 We were perfectly situated, being able to see over to Fort McHenry which was the main venue, and back into the city and the Inner Harbour. To say that these were the best fireworks I’ve ever seen would not be an understatement. They went on for more than 20 minutes, with all six barges firing off fireworks at the same time. It was a sensory overload, but so much fun! 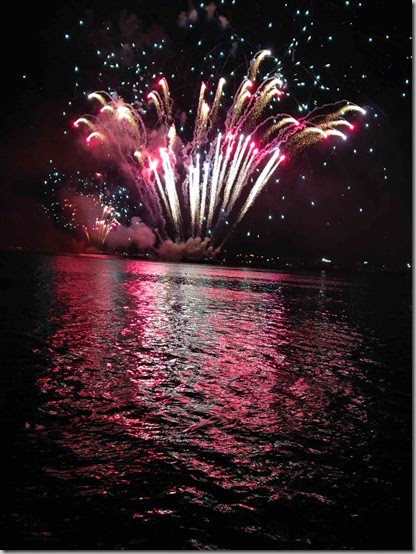 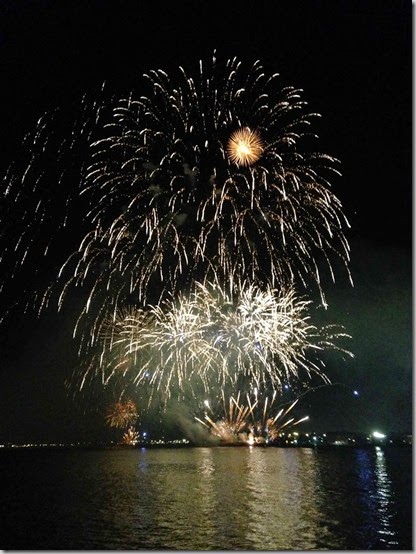 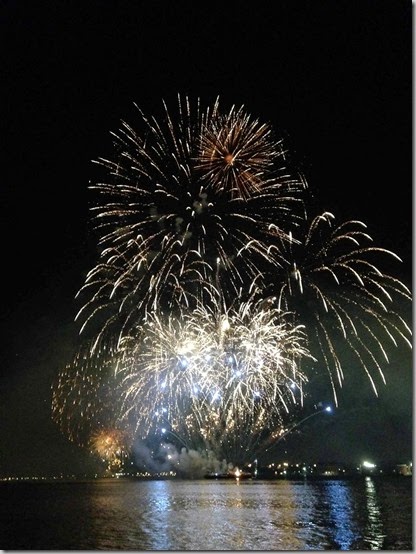 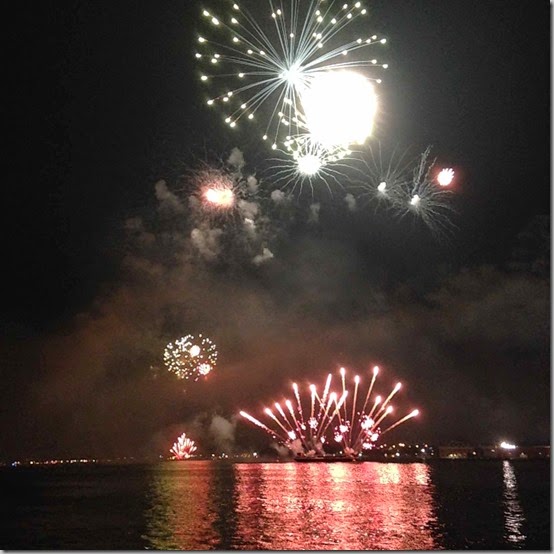 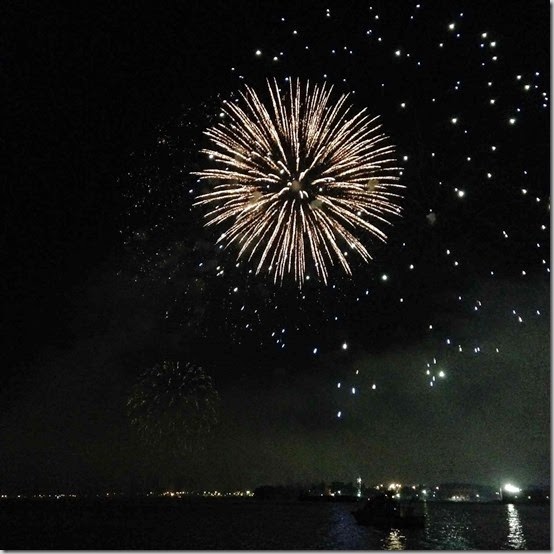 I tried to take a panoramic shot so you could see more than one barge, but it’s not great… the boat was rocking a little bit in the chop, so some of these pictures are a little crooked.

One of the fun pieces that they did was make pictures out of fireworks, and you can just see the flag here. They also spelled USA and 1814 and 2014. 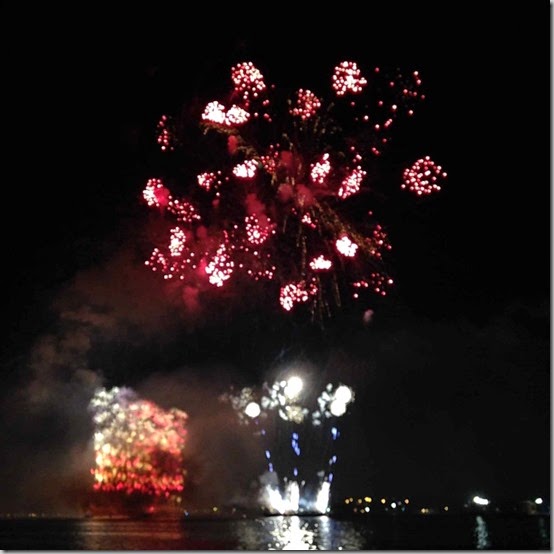 I love this picture, during the finale! I am taking a picture of the fireworks, and in the corner, you can see one of my friends taking the same picture! 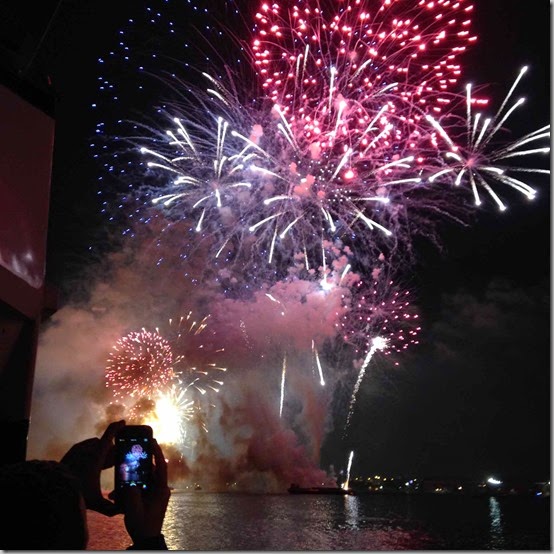 I love the second or two after the fireworks finish, and they’re still echoing across the harbour, and then all of the boats start sounding their horns in a cacophony of hoots and toots!

As we sailed back into the harbour, it was great to see how many of the buildings had been lit in red, white and blue! 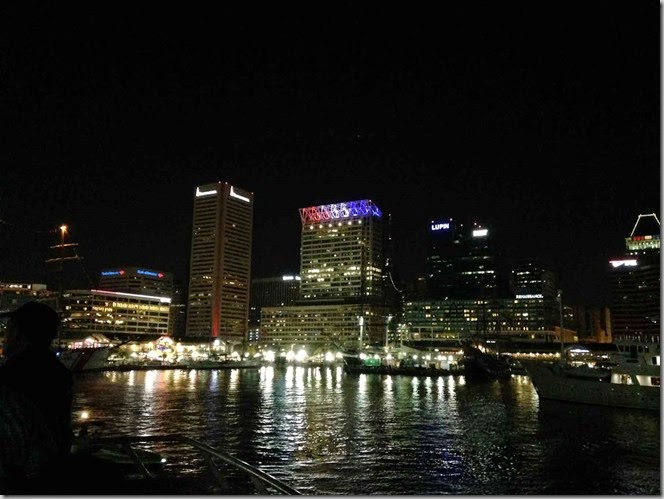 On Sunday, I met up with some friends at Port Covington and we watched the final show of the Blue Angels. If you haven’t seen them, they’re simply amazing. 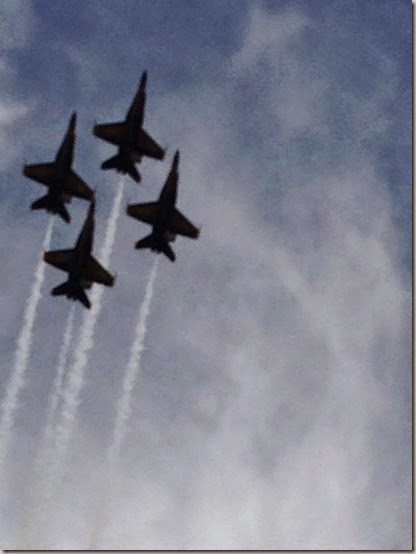 Their rolls, spins, speed and seer power are fabulous. At times, they are flying so low that their landing gear drops, 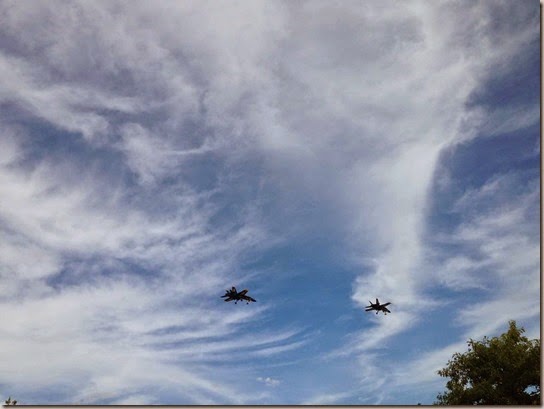 and then they fly so high that they get lost in the sky and the clouds. They fly over so fast and so close that your bones rattle.If you look closely, two of the planes are flying up-side-down! 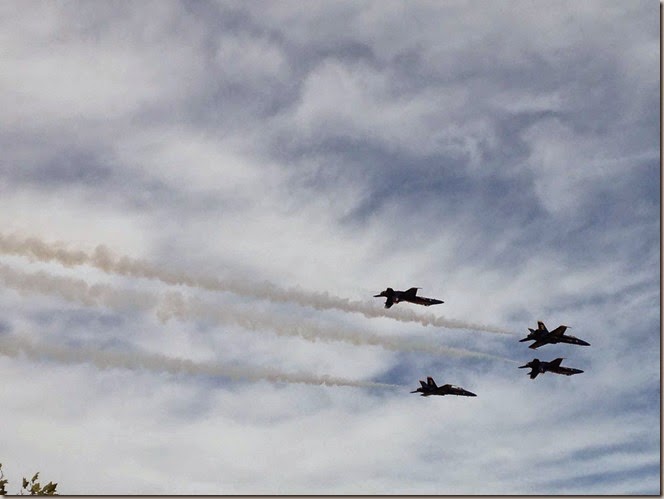 As these two went by, they were going about 600 miles per hour. 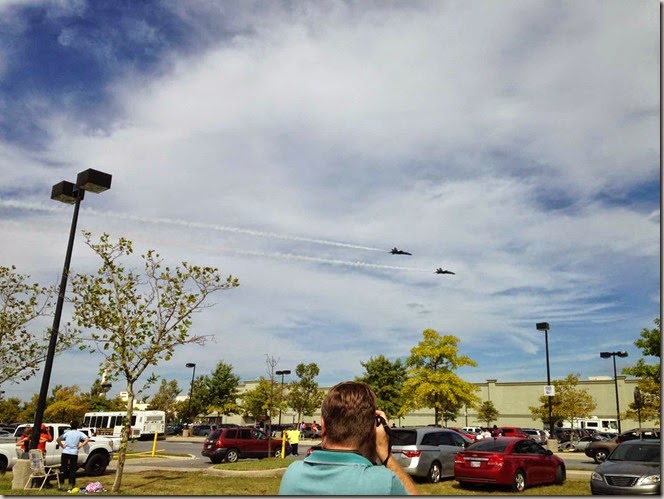 My little camera and iPhone are just not good enough to get decent shots, although the friends I was with got a lot. Between the two of them, they shot off more than 1400 images! 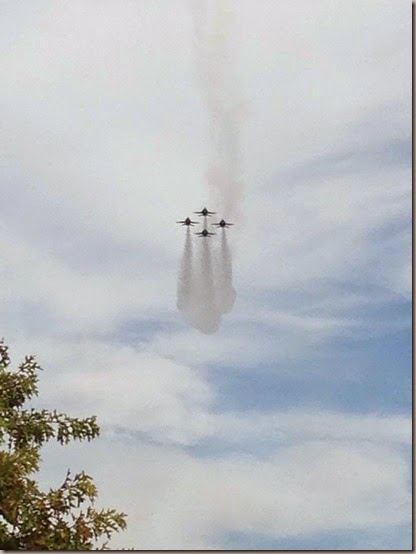 One of the fun images from this weekend is of Governor Martin O’Malley dressed in period uniform atop a horse. I remember when he learned to ride about 10+ years ago at Fort McHenry. Later in the weekend, he and his Irish rock band played a concert at one of the Star-Spangled celebration sites! 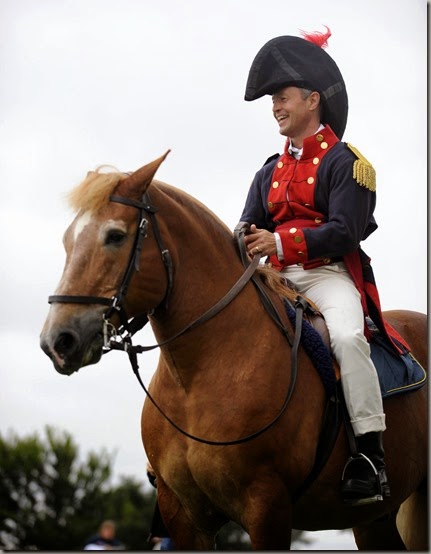 It was such a fun weekend and I am so glad to have the chance to participate in the events. I am so proud of Baltimore and how beautifully everything went and how fabulous the city looked.