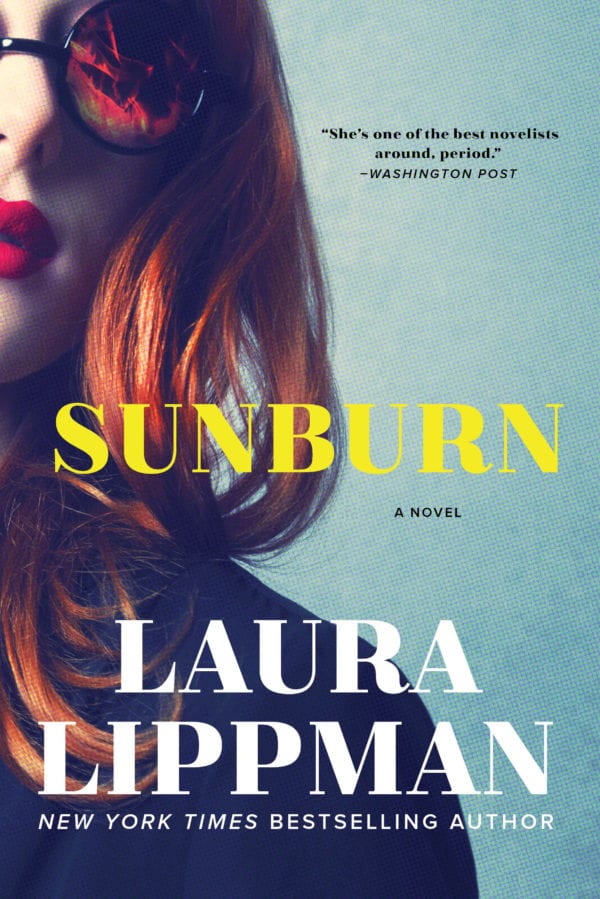 If you love Laura Lippman, as so many Baltimore readers do, she’s kept you busy in the seventeen years since she left her job as a reporter at “the Sunpaper” and devoted herself full-time to fiction. Her series featuring detective Tess Monaghan debuted in 1997 with “Baltimore Blues.” “Hush, Hush,” the twelfth in the series, came out in 2015. Her latest book, “Sunburn,” is the tenth of her off-series novels; many of these have hit the New York Times bestseller list in a big way. Just released this week, “Sunburn” may be heading there to join them; starred pre-pub reviews are now joined by raves all in the daily papers and on websites.

In “Sunburn,” Lippman pays tribute to a literary predecessor who, like her, began his study of crime as a journalist at the Baltimore Sun — James Cain, author of “The Postman Always Rings Twice,” “Double Indemnity” and “Mildred Pierce.” Noir conventions are both updated and gently toyed with in Lippman’s version.

Her tale of the sexy stranger passing through town is set in the mid-1990s. The central character is a woman named Polly Costello who’s on a beach vacation in Fenwick, Delaware with her husband and three-year-old daughter. One morning she tells him she needs a break from the sun, then grabs her duffel and heads down the road.

Her first day on the lam, she runs into an interesting guy in a bar. Neither she nor Adam are candid about what has brought them to a stool at the High-Ho, but both stick around town and get jobs there, as chef and waitress, respectively. Delmarva aficionados will really enjoy Lippman’s fictional two-bit burg; even British author Harriet Lane picked up the vibe, writing in her review in The New York Times, “The particular atmosphere of unlovely Belleville is deftly conveyed: its motel and trailer park, its emptied-out Main Street and, of course, the High-Ho, where regulars gather to watch ‘the inevitable Orioles game on the inevitable TV with the inevitable shimmy in its reception.’ Yet there is beauty here too. You see the huge red sun sinking into the cornfields; you feel the dew underfoot.”

We caught up with Lippman to ask her a few questions.

Baltimore Fishbowl: Polly Costello, the protagonist of “Sunburn,” starts off by doing the unthinkable: abandoning her daughter. Do you think becoming a mother, as you did relatively late in life, has changed the way you write about motherhood?

Absolutely. But then, I think almost anything that happens to a writer changes a writer. I believe in the power of imagination; one doesn’t have to be something or experience something in order to write about it. But I write about it differently now. I think the thing I didn’t know before is that a child is not omnipresent in one’s mind, at least not mine. When I’m away from my kid — it’s almost scary to me that’s not on my mind every single second.

BFB: The chef in “Sunburn” makes a perfect grilled cheese sandwich. How is that achieved, and how did you come by this knowledge?

I long had this theory that bacon-grilled cheese sandwiches would be better if the bacon were in small pieces, sprinkled over the cheese. Michael Ruhlman, whom I met through my friend Ann Hood (they were married in 2017) is a chef and a writer, so I approached him about my theory. We were both very engaged with the idea of how to make a great grilled cheese sandwich with ingredients on hand in a roadside Delaware joint, circa 1995. And, in fact, it was only after the book was finished and we decided to make the sandwich at the Baltimore Book Festival that we realized the key move is to spread the outside of the bread with mayonnaise. It makes for better browning, and it tastes wonderful.

BFB: What are your favorite Baltimore take-out sandwiches?

I have the classic Baltimore answer to this — it’s not there anymore. For years, my favorite sandwich was the grilled California chicken wrap at Metropolitan in South Baltimore. I ate it almost once a week. Then Metropolitan closed down. My runner-up is the chicken-and-black bean wrap at Spoons.

BFB: In the podcast you recorded with Pamela Paul, you talked about the process of evolving a series character like Tess Monaghan. You mentioned that you waited quite a while before you a.) let her kill someone, or b.) gave her a child, because those things would profoundly change her character and behavior. Can you tell us any more about how Tess is evolving now? Is there another on the way?

I’m not through with Tess, but I don’t know what to do with her because she’s so settled now. Husband, business, child — I can’t see her taking a lot of risks. Sometimes I think she should become more of a Nero Wolfe character, with a young apprentice doing her legwork. Sometimes I think I should write a book for younger readers in which Tess’s daughter becomes the sleuth. There’s not a Tess book underway right now, but there will be, eventually. I just have to find the right story for her.

BFB: How old is the kid now? Can you fast forward to empty nest and have Tess go on a cruise?

“Now” is a weird concept in the Tess universe. I can fast-forward. I can go backward. The book I’m working on now was originally conceived as a prequel about Tess’s parents; instead, Tess’s mother is a minor character. So I can do whatever I want. I just have to decide — what do I want?

BFB: Now that you live in New Orleans half-time, will you be setting some fiction there? Or have you? I might have missed it!

Two short stories, one of them written from a touristy point-of-view and one of which, almost predictably, drew a sneering observation about some detail that wasn’t precisely accurate. Which is why I don’t want to write about New Orleans. People are very protective, almost territorial about it. Plus, I don’t think I have anything interesting to say about it. I have a good friend there who writes crime novels set in the city, Greg Herren, and when I notice something interesting, I just tell Greg. As in: “Greg, a lot of the women at this Uptown gym wear tennis skirts to work out, what’s that about?” Or: “Greg, I went to a party and a giant pig was there, and he was the best-behaved attendee.”

BFB: Well having written a few scenes at Mardi Gras myself, I have to say — it’s very fun. Don’t let those yats get ya down.

If I ever decide I have something fun/original to add, I will!

BFB: How would you compare Baltimore and New Orleans?

They’re both provincial in the best sense of the word. They have strong identities, they don’t want to be other cities, they just want to be the best versions of themselves. They’re resilient. They share other things, too, which aren’t so positive, but I hate to dwell on those topics. Both places make me very happy.

BFB: Agree! Finally, I remember seeing the very first performance of the Stoop about 10 years ago at the Creative Alliance. You were in it, and you were wonderful, talking about how your career at The Sun came to an end; she who laughs last laughs best, I seem to recall. Have you done any more of this kind of storytelling on stage since?

Last December, I was asked to do this at Joe’s Pub at the Public Theater in New York. The theme was “caught in the act,” and I had nothing; I’m something of a goody-goody. Then, when it was about two weeks away, I was called to the principal’s office for the first time in my life. BECAUSE OF A TWEET. I had tweeted that I wanted to seek revenge on a “mean girl” at my daughter’s school by killing her IN A BOOK. Some “concerned parents” ratted me out. It’s my take that the real problem was that no one knew which mean girl I meant.

On February 23rd at 7pm, Laura will launch Sunburn at the Ivy Bookshop.