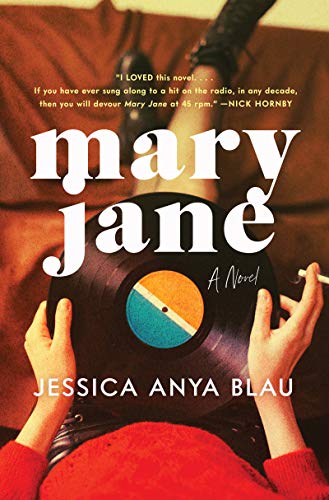 Jessica Anya Blau has been delivering summer reads to her fans since her 2008 debut, The Summer of Naked Swim Parties, which was set in the author’s native Southern California in the 1970s. Her latest, Mary Jane, returns to that period, but this time in Roland Park, where Blau arrived in the early aughts. Her inspiration for some of the details of the fictional Ruxton Academy in her previous book, The Trouble With Lexie, came from the area private schools she sent her daughters to in those years. Mary Jane is her first book to dig in and explore the Baltimore setting… particularly the leafy corner of it that is Roland Park.

Her protagonist, Mary Jane, is a 14-year-old Roland Park Country School student who gets a summer job babysitting for the Cones, a family a few blocks over. Her very conservative mother is under the impression that Dr. Cone is a medical doctor — if she knew that he is actually a Jewish psychiatrist who has invited a famous drug addict client to come to his house for a personalized rehab program, she never would have allowed Mary Jane to take the job.

In fact, there is almost nothing about the Cone family that Mary Jane’s mother would approve of. Her first day on the job, she and her five-year-old charge, Izzy, color penises in a coloring book called The Human Body. And the following week, Jimmy, the blue-eyed rock star, and Sheba, the sultry actress, arrive for the summer. It isn’t long before Mary Jane is exposed to more than just coloring books: music, new foods, new ways of parenting, sex, and even group therapy.

We caught up with Jessica to discuss the book.

You were still in California in 1975, right? How did you do the research for Mary Jane?

There was stuff I researched, but most of the Roland Park stuff was handed to me by people through years after I bought a home there. Since we are a Jewish family, no shortage of people let us know that until the mid-70’s people of color and Jewish people were not allowed into the neighborhood. The Cone family in the novel would have been one of the first Jewish families in Roland Park. And, of course, everyone loves to talk about the Olmsted brothers, the fact that Roland Park was one of the first planned developments in the U.S., and that the little shopping strip where Petit Louis is, is the first “strip mall,” in America. My girls went to RPCS and we belonged to the Roland Park Pool. In just living in Roland Park, the history was handed over: the good and the shameful.

Are all the places in the book real? Eddie’s is, of course, but what about the restaurant they love, The Little Tavern? And the record store that plays such an important role?

I had never seen Little Tavern where they sell burgers “by the bagful,” but there are a lot of photos and written memories of it on the internet. I went online and looked at the record stores that were in Baltimore in 1975. Each one looked fabulous. The one in the book is a composite of all the amazing record stores that used to exist. I consulted Kindall Rende (who was born and raised in Baltimore) when I needed to send the Cones out to buy new dishes. She told me they’d have bought them at Smyth, the jewelry store. I’m ashamed to admit I doubted her. I called the store and spoke with the official historian who confirmed that in the mid-seventies they sold dishes there.  The Elkridge Club is, as everyone in Baltimore knows, real, too.

The most famous literary depictions of Roland Park are in the work of Anne Tyler — do you consider Mary Jane an homage to her?

Absolutely. I love all her books. I read many of them before I lived in Baltimore. When I applied to grad school at Johns Hopkins, I imagined this beautiful campus surrounded by Tyler landscapes with Muriel Pritchett walking a dog down the sidewalk. Tyler’s characters also shop at Eddie’s, by the way. One of the first things I did after moving to Roland Park was open a charge account at Eddie’s. That was an homage to her, too!

The Mary Jane playlist on Spotify is so much fun. How did you choose the songs for it?

While I was working on the book, I listened to music from the 70’s just about every day. I’d listen in the car, and on Spotify, and I’d ask Alexa to play Billboard’s top 100 songs from 1975. I found new music that I absolutely loved (like Up for the Downstroke from Parliament) and was very happy to listen to the music that I already knew. I often danced, too. The Spotify list is songs by artists who are mentioned in the book—it’s music that Mary Jane would have heard while she was working at the Cones’ house. It was hard to narrow it down, but I did. I included a song from Jesus Christ Superstar since Mary Jane does belong to the Show Tunes of the Month Club.

What about the rock star and his wife? Were you thinking of any particular real people when you wrote them?

I read Keith Richards’ memoir, LIfe, while I was working on this book. I took a lot of his internal life from that: his relationship with and feelings around heroin, how he felt about guitar playing and fame. But Jimmy is not Keith Richards. He feels the same way as Keith about many things, but he’s very American; a southerner whose grandmother dragged him to church. And Sheba, his one-named movie star wife, is based on the singing stars of the 70’s. Along with her movie career, Sheba and her brothers had a TV variety show where they harmonized and did skits. Of course, I was thinking of shows like Donny and Marie or Sonny and Cher. And didn’t Captain & Tennille have a show?

Those shows were corny and projected a rosy-cheeked, wholesomeness that I can’t believe existed off-screen for those people. Today we know too much about celebrities—who’s in rehab, who had plastic surgery, who’s a sex addict, etc. But back then, there was a false front that viewers seemed to buy. I mean, mothers wanted their daughters to marry Liberace. I liked getting into the heads of Sheba and Jimmy. Actually, it was fun getting into the heads of all the characters in Mary Jane.

I really hope readers enjoy entering the Cone household in Roland Park where there’s a shrink, his hippy-ish wife, a precocious five-year-old, a fourteen-year-old who loves Broadway musicals and singing in her church choir, a rock star getting sober, and a movie star who loves to have fun.

May 11, 7 pm ET. Jessica will be in conversation with Nick Hornby.

May 13, 10 pm ET. Jessica will be in conversation with booksellers at Great Good Place for Books in Oakland, CA.

May 18, 10 pm ET. Jessica will be in conversation with Joanna Rakoff at Chaucer’s Books in Santa Barbara, CA.