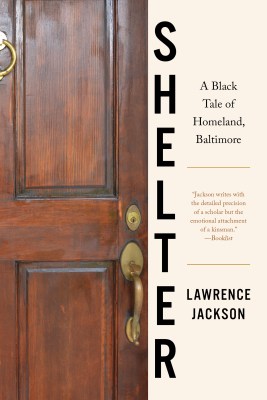 When Lawrence Jackson interviewed for a position as a professor at Johns Hopkins University, he presented in a lecture hall with a portrait of a former slave owner on the wall. Jackson’s family members were some of the only Black people in attendance. He mused that his chair should have been renamed for the person that he believed was partly responsible for his consideration: Freddie Gray.

Shelter is the story of Jackson’s return home to his native Baltimore, captured in a series of essays that are part memoir, part history of the city, and part reflection on Black fatherhood, homeownership, and economic mobility today. Born in West Baltimore, Jackson finds himself returning decades later as a professor at Johns Hopkins University, purchasing a home in Homeland, and seeking entry to private schools for his sons. Scenes from the life he returns to – sweeping the street in front of his mother’s church, attending a Martin Luther King Day parade – present opportunities to explore the complex inheritance of his upbringing in a family and a city shaped by generations of slavery.

Kirkus gives Shelter a starred review, calling the book an “an extraordinary dual portrait of the author and his hometown – angry, tender, incisive, and bracingly eloquent.” Jackson teaches English and History at JHU and has authored six books, including the award-winning Chester B. Himes: A Biography (2017) and forthcoming Hold It Real Still: Clint Eastwood, Race and the American Western (anticipated September 2022). 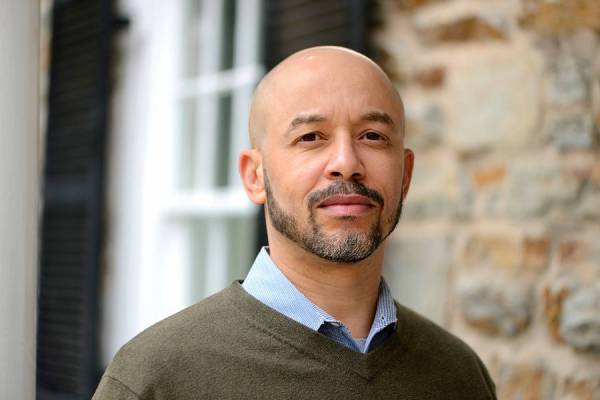 Baltimore Fishbowl: I am struck by your descriptions of your childhood in Baltimore in the 1970s and 80s. You tell us: “The Baltimore I grew up in had a sort of ecological sadness.” What do you mean by that?

Lawrence Jackson: My childhood friends and I are obsessed with mayhem. Sike up! We send messages to each other about it and in such a language that I would be embarrassed to show you. After the news announced the most recent batch of “bulletmoredom,” we started to text each other to make sure no one had gone to the Shop Rite on Saturday night. Even my mother is into it. In 2003 I wrote a memoir of growing up in Baltimore that I thought was so perfect and I was convinced I would be the next Warren Miller, who I thought was black at the time. The book was called “Half-Slick” and I had it sent to an editor named Chris Jackson in New York who would later make another Baltimore writer quite famous, but in that year it was deadening trying to get a response. One insider wrote a gratis report and said that he couldn’t figure out if the narrator was going to the Ivy League or was a crack addict. I used to write these pieces, like “Slickheads” and “A Letter From Baltimore,” thinking that there was more going on in America than bare liberal toleration.

BFB: You’ve lived all over the US – including over a decade in Atlanta, Georgia – but Baltimore is where you choose to tell the story of Black homeownership in a neighborhood founded by a wealthy slave owner. What parts of this experience are uniquely Baltimorean?

LJ: When you are born and raised someplace you always approach everywhere else as a tourist. Someone asked me when do you become native or permanently bound to Baltimore, and I responded by way of funerals, funeral plots and the cemeteries. Every day I ask myself, will it be Wylie [Funeral Homes] or Vaughn Greene [Funeral Services]? …So, in no other place that I have lived did the civic responsibility of curiosity ever even occur to me, and it is of course only through the largesse of New York’s former mayor that I have the opportunity to move into a place engineered by a slaveholder whose library is lovingly maintained in the local historical society, including the longhand draft of his dearest friend’s immortal 1857 words “no rights a white man is bound to respect.”  It is not easy to get back to the old plantation.

BFB: You say that when Hopkins proposed a private police force, it was reacting to two types of violence: drug-related violence “connected to the city’s most ancient drug bazaars” and school shootings, which you ascribe to “white male economic panic.” Might these two types of violence have the same historic roots?

LJ: I think of Baltimore’s heroin markets – which still seem to me as the foundation for the open-air markets which apparently dispense mainly pills now – as a product of COINTELPRO and the Vietnam War. Nine million servicemen, four million heroin testers, two million addicts, and racist draft boards sending complete neighborhoods to Vietnam. So you do the math… School massacres are carried out, to me, by white boys who are spurned by jock culture and nerd culture, and in the post-imperial context of the American empire are convinced that there is no future bonanza, no gleeful crusading moment of Bill Gates or Tiger Woods, let alone Eddie Gallagher.

BFB: One of the most joyous moments in your book is a jazz concert you organized in Lafayette Square, attended by neighborhood residents as well as members of your church, your Black fraternity, your old neighborhood friends, and your son. What do gatherings like these mean to you?

LJ: Well, I live for those moments of community celebration and mutual sustaining joy. It is what we call The Culture and I tend to think of my membership and participation and work to organize the festival as the essence of my humanity, which is to say my humanity is relational, in the context of other human beings…Creating the space for the carnival, and a carnival of archives, is important too as a person who can be introverted in sensibility at times or, prone to social restraint. The good way of putting that quality of introspection is to quote Marcus Aurelius: The object of life is not to win friends and influence people, but forsake joining the ranks of the insane. I saw that yesterday and fell in love with it, on a site that was linking to stuff about the U.S. instigation of the war in Ukraine… Jazz is also a metaphor for democracy, the antithesis of war. We should bump jazz instead, and on September 10, 2022, jazz returns to Lafayette Square.

BFB: You are a careful maintainer of your yard and home in Homeland, and express hope that your sons will be the kind of people who keep their own yards. Where does this value come from? Why is it something you want to pass on?

LJ: My sons say it is because I am a peasant and a farmer and neither of them are that. We are, however, the direct descendants of black people who had survived enslavement and bought land as a sign of freedom. It inspires me to think Sandy Dickinson, Granville Hundley, Solomon Mitchell, or Nat Macklin might be proud somehow that I myself keep a tidy yard. I worked with a carpenter putting in the windows of my first house in Dekalb County and Isaiah taught me to really abhor waste. I always see a connection between conservation and preservation and doing it yourself, I guess.

Shelter’s agricultural references and the Christina liturgy and its embedding in the English literary tradition that shaped the ideas of the founder of the Homeland neighborhood, David Maulden Perine – this recaptures the fleeting past that can never be recaptured but whose lingering memory seems so sweet to the tongue.

I try to remember my own father, gone now 32 years, so it is natural for me to sort of indulge some of the things he enjoyed and did in his life, but especially his vogue for antiques and art. While my son Mitchell is a painter, I can only style my yard into a work of art, and because the grass doesn’t want to grow underneath the trees and because the topsoil runs off in the rain, it is hard. 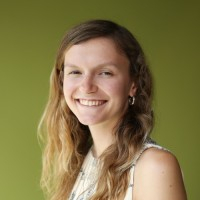 Celine Shanosky
Celine Shanosky is a native of Baltimore City and has a BA in English from Johns Hopkins University. She currently works for a nonprofit consulting firm in Cambridge, MA.