There Are More Than 16 Kinds of Rowhouses in Baltimore

Everyone knows that row houses are an iconic part of Baltimore architecture. But did you know that there are at least 16 different types of row house styles found around town?

END_OF_DOCUMENT_TOKEN_TO_BE_REPLACED

Baltimore Design School is Up for an Architecture Award

Our local Baltimore Design School, is up for an Architizer.com A+ Design Award. Designed by Ziger/Snead Architects, and one of the most watched public school projects in Baltimore, the building has been lauded as an architectural marvel.

Check out below the story about the renovation of the BDS in Fast Company by sometime Baltimore Fishbowl contributor Marianne Amoss.

If you like what you see, take a second to vote, here.

On the lower level of the Baltimore Design School, a city public school located in central Baltimore, there is a blown-up photo affixed to a wall. The black-and-white picture shows the interior of a building in disrepair, with pools of water on the floor. It’s a stark reminder of what used to be here: an abandoned factory so decrepit that the HBO series The Wire used the building as a setting symbolic of post-industrial urban decay. But today, with a major architectural intervention–and a grant from Adobe–this building has become a state-of-the-art public school for training future designers.

Baltimore Design School–or BDS–is the first of its kind in the city, a public middle and high school dedicated to students interested in architecture, graphic design, and fashion. The school was founded a few years ago, but its permanent home in a mammoth, 110,000-square-foot former clothing factory only opened this fall after a $26.85 million overhaul.

END_OF_DOCUMENT_TOKEN_TO_BE_REPLACED Courtesy Bmore Media – The Sellers Mansion at Lafayette Square in west Baltimore Harlem Park neighborhood had once been one of the grandest homes in Baltimore. Today, it is decaying from neglect.

When nonprofit Baltimore Heritage discovered that the square was the site of a Civil War army hospital that accommodated 1,000 patients, it organized an architectural dig at which hundreds turned out.

END_OF_DOCUMENT_TOKEN_TO_BE_REPLACED

Baltimore writer and Loyola University prof Ron Tanner doesn’t believe all “no trespassing” signs ought to be obeyed.

I break into old houses. Unoccupied houses. Abandoned houses. They have to be architecturally interesting, and the older, the better. I started doing this when I was 10, always in the company of my two older brothers. We never took “no trespassing” signs seriously. This is problematic, I understand. I am now a property owner and think of myself as respectful of other property owners. So, let me admit the obvious: trespassing is wrong. That’s why it’s against the law. Still, a “no trespassing” sign on an old, empty house seems to me more of a suggestion than an injunction.

END_OF_DOCUMENT_TOKEN_TO_BE_REPLACED

Welcome to our new series “Neighborhood  Watch,” which reveals the character of  a city neighborhood through the eyes of residents who live there.  All photos by Tyler Merbler.

It was a damp February Friday and I was out of breath by the time I reached Mount Royal Tavern.  I had just missed the Circulator downtown and didn’t have the luxury of waiting 20 minutes for the next one, so I huffed it north, hoping I wouldn’t be too late to meet up at The Mount Royal Tavern with Bolton Hill residents Kevin and Sarah Cross.  Kevin and I met through a mutual friend and through the wonders of Facebook and Twitter, I learned that Kevin has a wealth of knowledge of all things Baltimore.  On social media, he’d comment on the history of the city, upcoming festivals, or anything and everything going on around town.  When I decided to highlight neighborhoods in Baltimore through the eyes of quintessential residents, I knew he and his wife Sarah would be the perfect place to start. This was my first visit to the Mount Royal Tavern; it was everything I desire from a bar.  Cash only.  Old men tending bar.  An elderly patron calling me her shield from unsolicited advances.  The bartenders are heavy on the whiskey in their whiskey sodas, which pretty much cinched MRT for me.  It was like Club Charles if they had exchanged all the hipsters for quirky lifetime locals and replaced the art deco decor with absurd, ever-changing art, like the erotica-themed pieces that lined the walls that night.

END_OF_DOCUMENT_TOKEN_TO_BE_REPLACED

Have you ever driven by an old building for years and years and wondered what it looks like inside? Is is all chopped up with no regard to its historical character, or has someone respected the place?

I had the opportunity to visit a building I’ve driven by too many times to count. I had a meeting there but told the people I met with that I wanted to see the space. They graciously accommodated my request. 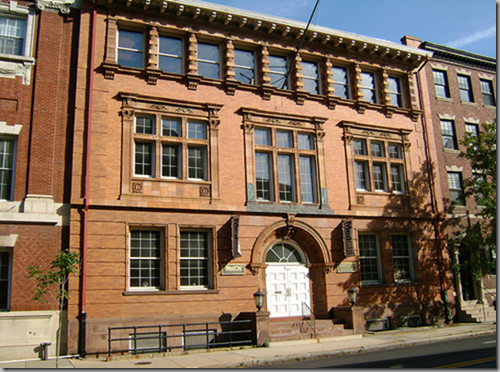 This building is home to the Maryland Medical Society (aka MedChi), which was founded in 1799 as the Medical and Chirurgical Faculty of the State of Maryland (Chirurgical was the common spelling of surgical at the time).  MedChi has been in this space since 1909, and there are rumours that a ghost also inhabits the building.

END_OF_DOCUMENT_TOKEN_TO_BE_REPLACED

Have We Reached the End of Formstone? Baltimore has a complicated relationship with its own kitsch. We want to celebrate our quirks — the painted screens! the accents! — while still getting cred for being a classy East Coast metropolis. Worst-case scenario, we’ll end up with a theme-park version of what Baltimore once was, a city that’s all Cafe Hon, with no actual hons. Which is why I am registering my disapproval of the new Baltimore zoning code that would effectively make formstone — that iconic/ugly fake facade that’s seen all over the city — illegal.

END_OF_DOCUMENT_TOKEN_TO_BE_REPLACED

I got a lot of grief from someone the other day who said that I a) post too much about OKL and its mad prices, b) and I “troll through the thousands of item available of any given day to simply mock one item that you don’t feel is worth the asked price” and c) that it’s becoming my “thing” to post about OKL.