What is the value of a Black life in America?

That’s the fundamental question posed by a new exhibit in Baltimore, created in solidarity with the Black Lives Matter movement and designed as a commentary on 400 years of systemic racism in America.

“Society’s Cage” is the name of a 15-foot by 15-foot pavilion that was erected this summer on the National Mall in Washington as both an educational exhibit and a work of public art, forged in the aftermath of the killings by police officers of George Floyd in Minnesota and Breonna Taylor in Kentucky.

The pavilion was intended to travel to other locations, and the first stop outside Washington is Baltimore, where it opened today and will remain until Oct. 30.

Instead of the National Mall, where it was on display from August 28 to September 12, Society’s Cage has been erected on War Memorial Plaza, the green lawn at 101 North Gay Street, in front of City Hall. An opening ceremony will be held at 2:30 p.m. today.

The installation was the work of African American architects and designers from SmithGroup, an architecture firm with offices in Washington. It’s a cube-like structure that’s part open-air pavilion and part freestanding cage, an “experiential” environment that people can walk in and around to learn about the impact of racism and police brutality on America. 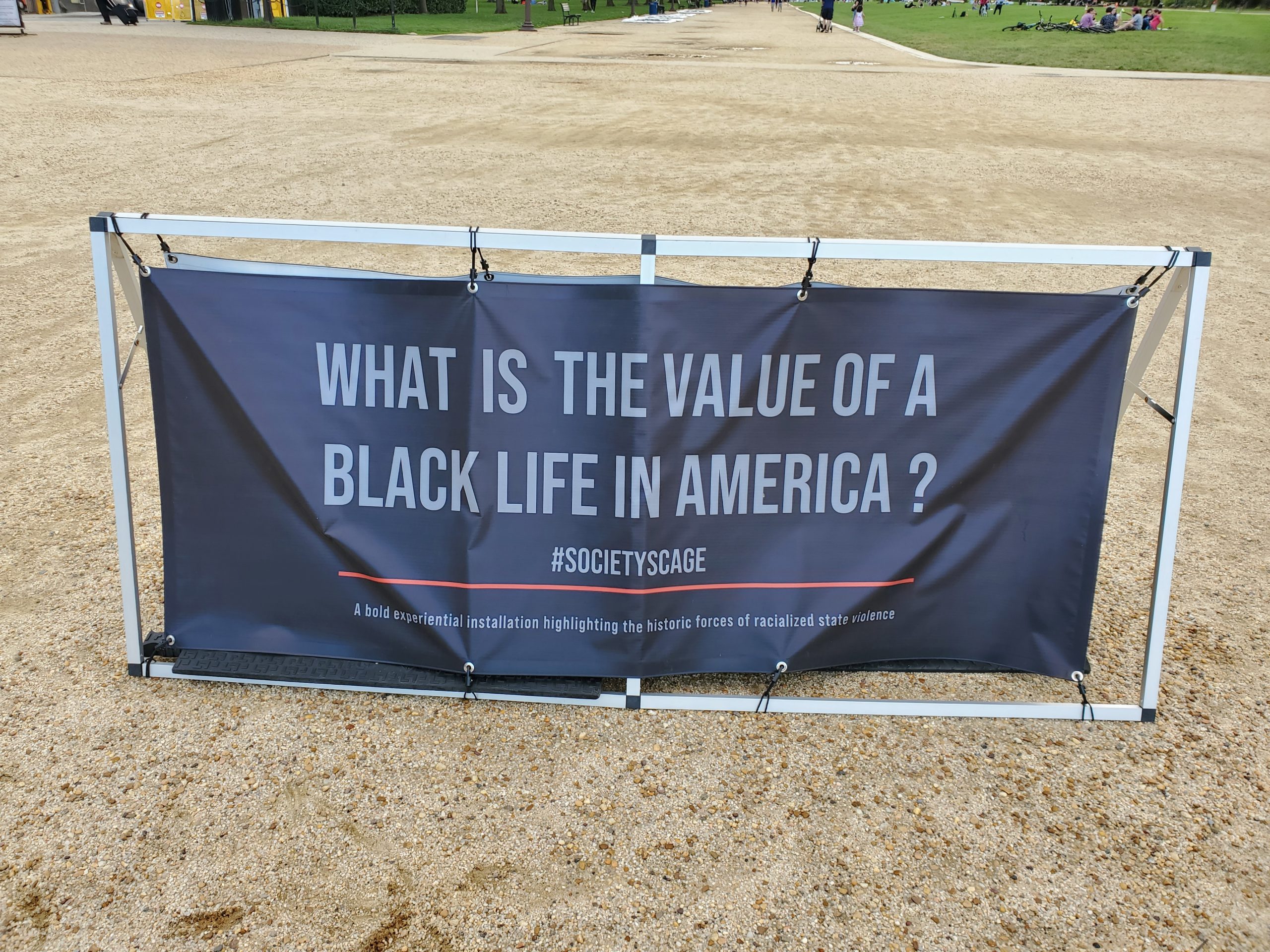 The outer edges of the pavilion and the floor inside are layered with words and statistics that make it clear the killings of Floyd and Taylor were not isolated incidents but part of a continuum of racist activity and that has been going on for centuries. It asks a fundamental question: What is the value of Black Life in America? When they first enter the pavilion, visitors are encouraged to see how long they can hold their breath, a reminder of the eight minutes and 46 seconds Floyd endured when a police officer pressed a knee on his neck. The floor contains the names of thousands of African Americans killed over the years by lynching, incarceration, capital punishment and “police terrorism.”

And yet the pavilion has a certain beauty to it as well, especially at night. The metal bars of the cage evoke prison cells and the weight of oppression. But the interior can also be calm and peaceful, an inner sanctum removed from the world around, a place for contemplation and introspection. Small lights in the ceiling become visible after dark, like stars in the sky. In Washington, the cage was even used for singing and dance performances, and people left roses around the perimeter in memory of those who have died. Different people had widely different reactions, from adults willing to linger and read every word to some children not wanting to go inside at all. 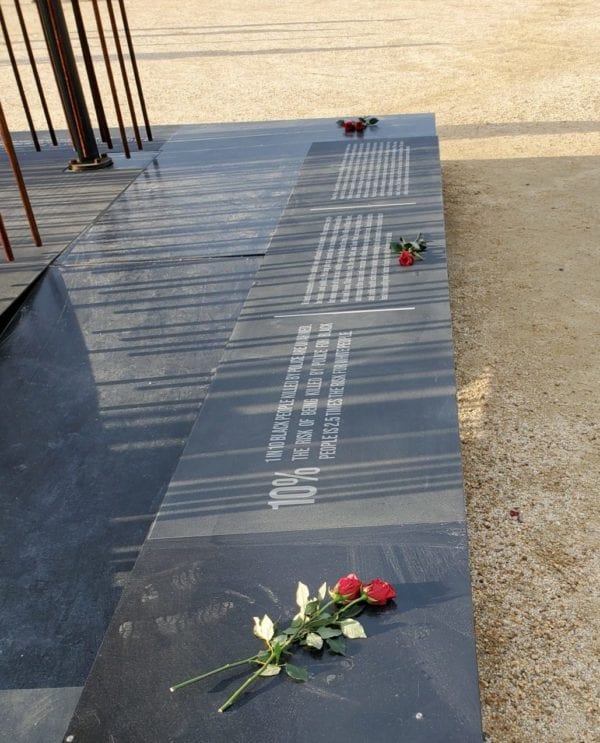 Taylor, a 26-year-old African American emergency medical technician, was fatally shot in her own apartment by plainclothes police officers who were looking for drugs and executing a no-knock warrant on March 13. Gunfire was exchanged between the officers and Taylor’s boyfriend, who said he thought the officers were intruders. Taylor was shot at least eight times and was pronounced dead at the scene. No drugs were found in her apartment.

Floyd, 46, was killed on May 25 during an arrest for allegedly using a counterfeit bill. He died after a police officer, Derek Chauvin, pressed his knee on his neck even though he was subdued. Two autopsies later found Floyd’s death to be a homicide. His death triggered weeks of protests in the United States and beyond.

SmithGroup architects Dayton Schroeter and Julian Arrington, who led the effort, said they wanted to do something meaningful after the deaths of Floyd and Taylor, a tangible project that would use their craft and talents as designers. Others on the team were Monteil Crawley, Ivan O’Garro and Julieta Guillermet.

They initially thought they might use their own funds and go to a home improvement store and get the supplies needed to construct the pavilion. But their company’s leaders heard about what they were doing and decided to support their efforts with seed money for materials, even allowing them to spend some work time on the project. In essence, “we were our client,” Schroeter said.

The team thought about putting the pavilion on Black Lives Matter Plaza in Washington, a section of 16th Street N.W. that’s close to the White House, but the city wasn’t issuing permits for temporary art installations during the pandemic. The mayor’s office directed the architects to the National Park Service, which offered a spot on the Mall that had become available after a previous applicant cancelled. It was a prime location, near 12th Street between the Capitol and the Washington Monument, with plenty of foot traffic in late summer and also room for social distancing. The installation was originally planned to come down before Labor Day but turned out to be so popular the architects asked the Park Service if they could keep it up for another week and the agency agreed. Now lots of cities want it.

Kathleen Lane, executive director of the Baltimore chapter of the American Institute of Architects, saw the installation in Washington in August and led an effort to bring it to Baltimore as a highlight of the AIA’s Baltimore Architecture Month activities in October. The AIA worked with the Baltimore Office of Promotion and the Arts (BOPA), which has made the installation a signature event for the city’s Free Fall Baltimore lineup. The city issued permits for the War Memorial Plaza site last week, allowing construction to begin, and the pavilion opened at 9 a.m. today.

“We’re very excited to see the installation in a new city,” said Christa Montgomery, a corporate communications specialist for SmithGroup, in an email message. “Baltimore has been very interested in hosting Society’s Cage since seeing it in D.C., and both AIA Baltimore and BOPA have been strong advocates for the installation. Ultimately, it was the enthusiasm and commitment from our partners and those in city government that made Baltimore a great next location.”

According to BOPA, Society’s Cage will be open daily from 9 a.m. to 9 p.m., and social distancing and masks are required to visit. SmithGroup has joined with the non-profit Architects Foundation to raise funds to help pay for the pavilion’s construction and to support the foundation’s Diversity Advancement scholarship program (architectsfoundation.networkforgood.com). So far, 219 people have contributed $68,605 toward a goal of $150,000, and donations are still being accepted.