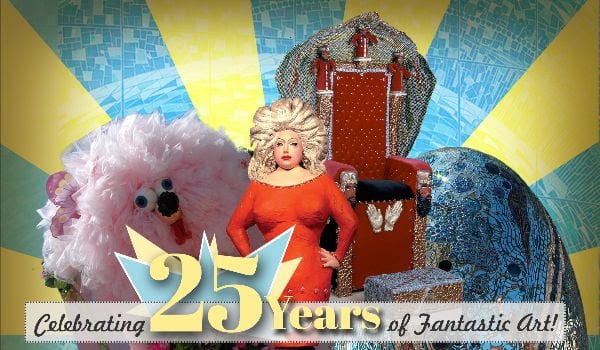 The American Visionary Art Museum, Baltimore’s home to works by self-taught artists, will celebrate its 25th anniversary this weekend.

The Federal Hill-area museum first opened its doors over Thanksgiving weekend in 1995 “in a spirit of gratitude and celebration of creative invention of all sort,” AVAM officials said.

This holiday weekend, the museum will mark 25 years of sharing art with the support of people from Baltimore and beyond.

“We give gobs of sincere gratitude to all our ardent fans and faithful supporters for helping us shine a bright light for 25 years upon visionary heroism with wit, wisdom, and intuitive wonders for all!” AVAM founder and director Rebecca Hoffberger said in a statement.

The AVAM on Monday tweeted photos of its building when the museum opened in 1995, and what it looks like today.

Before in 1995 & After. Our 25th anniversary is this #Thanksgiving Our accomplishments have included implementing the largest apprenticeship program for incarcerated youth involved in a mosaic project. For #GivingTuesday2020 consider https://t.co/Yz1Zc3Fd6F #baltimore pic.twitter.com/RMmwFTlKwq

Hoffberger added that having the AVAM in Baltimore has contributed to the development of the museum’s unique vision.

“Baltimore’s history as a ‘City of Firsts’ made it an ideal location for our palace of intuition that champions fresh visionary thought, be it in artwork, science, philosophy, humor, or medicine, but particularly in the field of social justice and betterment,” she said.

The AVAM on Wednesday also unveiled a new exhibition, “A Visionary Spirit for Invention,” at the EU Embassy Residence in Washington, D.C.. The exhibition, which was opened at the invitation of the EU Ambassador to the U.S. Stavros Lambrinidis and his wife, Phoebe Kapouano, is not open to the public but the AVAM plans to announce virtual tours via its e-newsletter and events calendar.

The exhibition is “dedicated to illuminating the role that resourceful, self-reliant, and resilient visionaries have played throughout humanity’s upward evolution and in underscoring that same spirited vision embedded in the founding heart of the American experiment,” AVAM officials said.

The AVAM temporarily closed in March in response to the coronavirus pandemic until reopening its doors to the public on Sept. 25.

The museum and the Sideshow museum store are open Wednesdays through Sundays from 10 a.m. to 5 p.m. People can also shop from the store online.

The AVAM hosts and participates in several annual events, including the Flicks from the Hill free family movie series; the Fourth of July Pet Parade; and the Kinetic Sculpture Race, a 15-mile, land and sea, human-powered race and visual delight.

This year, the museum canceled Flicks From the Hill and held the July 4 pet parade virtually due to the coronavirus pandemic.

The museum also postponed its 22nd Annual Kinetic Sculpture Race until May 1, 2021.

Congress has designated the AVAM as a national museum and education center for visionary art. The AVAM has also earned the Urban Land Institute’s National Award for Excellence for architecture and design.

Marcus Dieterle
Associate Editor at Baltimore Fishbowl
Marcus Dieterle is a freelancer and former associate editor of the Baltimore Fishbowl. He returned to Baltimore after working as the deputy editor of the Cecil Whig newspaper in Elkton, Maryland. Before that, he served as the editor-in-chief of The Towerlight. Marcus graduated from Towson University in 2018 with his bachelor's degree in journalism and political science. He can be reached at [email protected]