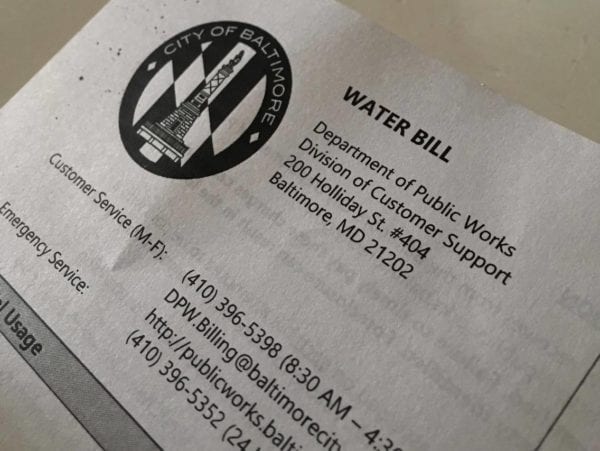 After learning the luxury Ritz-Carlton Residences at the foot of Federal Hill had not been billed for water service in years, Mayor Bernard C. “Jack” Young today is calling for a comprehensive audit of the system run by the Department of Public Works.

END_OF_DOCUMENT_TOKEN_TO_BE_REPLACED

Elijah Cummings, the son of former sharecroppers who rose to serve in the halls of the Maryland State House and Congress, totaling 36 years in elected office, has died. He was 68.

END_OF_DOCUMENT_TOKEN_TO_BE_REPLACED

After a lockout that ran through the summer, and more than half a year of its musicians playing without a contract, the Baltimore Symphony Orchestra’s management and players have agreed on a deal running through Sept. 6, 2020.

END_OF_DOCUMENT_TOKEN_TO_BE_REPLACED

With weeks to spare, Howard County offers to host Woodstock 50 concert at Merriweather

In the unlikeliest of twists, Howard County is offering to bring the 50th-anniversary celebration of the legendary Woodstock music festival to Columbia in just three weeks, after the event’s organizers lost financial backing and failed to get a permit to do it in New York.

END_OF_DOCUMENT_TOKEN_TO_BE_REPLACED

With persisting uncertainty surrounding the future of Pimlico Race Course in Northwest Baltimore, the city and a handful of Park Heights residents and officials are taking Ontario-based track operator the Stronach Group to court, in hopes of taking over the track and the Preakness Stakes outright.

END_OF_DOCUMENT_TOKEN_TO_BE_REPLACED

Within 24 hours of Joel Fitzgerald’s decision to withdraw from the confirmation process to be Baltimore’s next police chief, Mayor Catherine Pugh has picked another finalist from her fraught search process: New Orleans Police Superintendent Michael Harrison.

END_OF_DOCUMENT_TOKEN_TO_BE_REPLACED

The new year is almost here, and Baltimore restaurants and bars will be celebrating all across town will be celebrating. While there will be no shortage of places offering food and drink specials, we wanted to round up a list of some of the best theme parties, musical performances, vibrant displays and special events to ring in the new year. Here’s a list of some of the best parties happening in Baltimore on and leading up to New Year’s Eve:

END_OF_DOCUMENT_TOKEN_TO_BE_REPLACED

The top Baltimore sports stories of 2018

A lot happened in Baltimore sports in 2018. Yes, that’s bound to happen every year by virtue of all the games played. But a look at all the major developments for the area’s pro and college teams shows there were truly seismic changes. After years of competitive baseball, the Orioles fell flat on their faces, leading to a complete overhaul. On the verge of winning the AFC North, the Ravens are approaching the end of the Ozzie Newsome era and, by all accounts, have already concluded the Joe Flacco one.

Those are just a few of the major storylines to make our list.

END_OF_DOCUMENT_TOKEN_TO_BE_REPLACED

It’s been a long year, Baltimore. There were travesties, from the mass shooting at a newsroom in Annapolis to the frighteningly familiar tally of 300-plus people murdered in the city limits, to the death of Baltimore County’s top official.

The city tried out new tools for transportation and embraced a vision for change with Complete Streets. Officials and voters banded together to stave off any attempts at privatizing the city’s water system. The council and Mayor Catherine Pugh renewed the city’s commitment to preserving racial equality with a new fund, plus rules requiring agencies to consider equity in their decisions.

And there were opportunities to reflect, like when kids trying to make some money washing windows became a flashpoint conversation topic, or make good out of the bad, as with multiple Baltimore Ceasefire weekends that brought Baltimoreans together to confront a tide of violence.

Here’s a list of 18 of Baltimore’s biggest storylines from 2018. While it’s far from exhaustive, it should help to recap many of the changes that happened in the Baltimore area this year, and guide you toward some of the issues we’ll likely be covering in the new year.