7 POSTS 0 COMMENTS
Elisabeth Dahl works as a writer and freelance editor in Baltimore, Maryland. Her writing has appeared in various outlets, including American Short Fiction, Johns Hopkins Magazine, The Rumpus, and Headspace. Her website is ElisabethDahl.com.

From Baltimore to Alaska: Two RPCS Alums Discuss “Nobody Gets Out Alive” 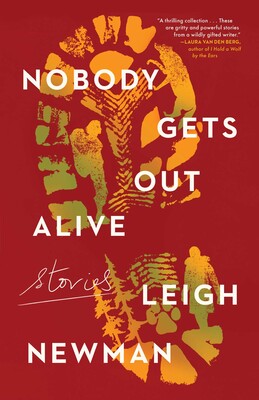 Leigh Newman’s first book, a memoir, was Still Points North (Dial Press, 2013), which was a finalist for the National Book Critic Circle’s John Leonard Prize. Not long after the book’s publication, I interviewed Leigh for Baltimore Fishbowl.

Now Leigh’s second book, a short story collection entitled Nobody Gets Out Alive (Scribner, April 12, 2022), is here. In a starred review, Publisher’s Weekly writes, “The author’s crisp portrayal of the Alaskan landscape and rugged culture holds the collection—and its magnetic characters—together.”

END_OF_DOCUMENT_TOKEN_TO_BE_REPLACED

I’m going to tell you a story, children. It’s a little scary. It’s about your parents.

Don’t leave. You should know this about them. It will help you understand.

END_OF_DOCUMENT_TOKEN_TO_BE_REPLACED

Between Alaska and Baltimore: An Interview with Acclaimed Memoirist Leigh Newman Leigh Newman and I were two among the legions of blue-uniformed girls at Baltimore’s Roland Park Country School in the late 1980s. She was a couple of years behind me, a condition that sometimes renders younger girls invisible, but Leigh was never that. Despite being quiet, she was both luminous and likable. I was happy to reconnect with Leigh in our 30s, through the New York/Baltimore writing circuit. And I was even happier to read her lyrical, honest memoir Still Points North: Surviving the World’s Greatest Alaskan Childhood (Dial Press, March 2013).

END_OF_DOCUMENT_TOKEN_TO_BE_REPLACED

Baltimore writer Elisabeth Dahl loses herself on Halloween night, in a good way.

One late October day when I was three or four, my mother woke me early from an afternoon nap. She held up a full gingham skirt and wide-brimmed straw hat I’d never seen and said it was time to get dressed. I was going to a neighbor’s Halloween party, she told me.

END_OF_DOCUMENT_TOKEN_TO_BE_REPLACED

A Tale of Two Haircuts

Baltimore writer Elisabeth Dahl combs the files of hairstyles past to discover, among other sweeping truths, that “good flow” is genetic.

The other day, I took my 12-year-old son, Jackson, for a haircut at a Hampden salon he’d never been to before. He got what he’s been getting for a while now — a longish cut, a variation on the shag. In celebrity terms, you might say it’s a modified Bieber.

The Bieber (which Bieber himself has since abandoned) is most easily identified by long, sideswept bangs — the eye-grazing fringe that set a billion tween hearts aflutter. Jackson’s classmates — many of whom sport a Bieber variant but would rather soak a paper cut in vinegar than admit even a remote likeness to the Bieb — call this sideswept quality flow. Some guys have good flow. Others don’t.

END_OF_DOCUMENT_TOKEN_TO_BE_REPLACED

Passport: A True Tale of Motherhood

Baltimore fiction writer Elisabeth Dahl retraces the philosophical questions — and moments of doubt — she faced as she anticipated motherhood.

One sunny day in my late 20s, I walked in a new square of park built on landfill beside the San Francisco Bay, my boyfriend next to me, a kite festival swirling overhead. As parents and kids stood on the green, watching their bright dragons zig and zag across the sky, I tossed out questions I hadn’t given much thought to before: Would I ever want to have a child? Was I too selfish? Would I be sufficiently loving? My own life wasn’t yet rock-solid — not much better than landfill in earthquake country. What could I provide a child?

A few months later, I launched into motherhood unexpectedly, after a careless moment. Parenthood was no longer a topic for discussion on a lazy Sunday afternoon. It was happening.

For the task-oriented among us, pregnancy can be thought of as a massive to-do list. You clock in at your appointed weeks, offering up various fluids and parts to tests. You count kicks and stock cupboards. You take classes to find out what your breasts were actually engineered to do.

Though I ticked items off the list alongside the rest of my pregnancy cohort, I never fully acclimated to the idea of parenthood. Not emotionally, at least. The crib might be bumpered, the diaper drawer filled, but my head and heart still lagged behind. My enthusiasm about the pregnancy had grown with my uterus, but the questions from the kite park persisted.

END_OF_DOCUMENT_TOKEN_TO_BE_REPLACED

My mother was a very bridey kind of girl, a girl whose idea of fun was playing wedding-dress-up. As early as elementary school, she resolved to someday work in the bridal department of a big Baltimore store. And later, after college, she did just that, securing a job in the Hutzler’s bridal department. She trussed up brides in their layers of white, arranging their trains before they went down the aisle. She went to the altar a few years later herself, to marry a handsome assistant minister. They made a good-looking couple, with slim silhouettes and bright white teeth. It was a nice, straightforward church wedding, exactly what she’d wanted.

I was a different kind of girl, a girl who didn’t think much about weddings until I was almost 30, when — shockingly — a pregnancy test turned up positive. I was six weeks along, nurturing a life the size of a chickpea, said BabyCenter.com.

My live-in boyfriend and I made the necessary decisions quickly and simply. Though we lived in Berkeley and my boyfriend was from Southern California, we’d marry in my hometown of Baltimore, in the central branch of the Enoch Pratt Free Library’s Edgar Allan Poe Room, an intimate space on the second floor, home to author readings and other events. The choice of setting seemed right. I’d always loved the building. We were bookish people, almost to a fault — bookstores and libraries our sacred spaces. Beyond that, a favorite relative — a grand-aunt, by then deceased — had worked just down the hall for years, as a graphic artist for the Maryland Academy of Sciences. Having the wedding in this spot seemed a way of having my grand-aunt there too.

Within days I was phoning Baltimore caterers and bakeries, talking crudités and lemon cake while suppressing morning sickness. The white dress I found on a Macy’s clearance rack a few weeks later was pretty, stretchy, and definitely good enough. At our wedding, I’d be 16 weeks along; who knew how I’d look anyway.

But I was dreading the whole bride thing, the whole center-of-attention thing that our culture seems to saddle brides with. I didn’t want to hear that it would be the most important day of my life. I didn’t want to fret over the planning or overspend on flowers. What were my wedding colors? Who knew? The role of bride — this concept of a bride, anyway — felt alien, and the feminist — not to mention introvert — in me wanted to keep it that way.

In the end, we had a very nice wedding, as simple as an afternoon tea party. The morning sickness that I’d woken with on the day of the wedding subsided not long after breakfast, and the dress fit adequately. We exchanged rings above my swelling belly, beneath the Poe portrait, among family members, friends, and old books. The event was intimate, warm, and friendly — a memory I will always cherish, but not because it was My Big Day.

I’m not alone in my ambivalence about embracing the role of bride, of course. These days, lots of women seem to find ways to skirt around conventional notions and be the kinds of brides they choose to be.

When my friend Meredith got engaged a few years after my wedding, she opted to buy her wedding dress from an affordable chain of bridal stores we’ll call Theo’s. I asked her whether she liked the dress she’d chosen. “It’s fine,” she said matter-of-factly. She asked the other five bridesmaids and me to pick whatever dress style we liked, in a light green color Theo’s called celadon. Celadon! Only those of us who’d taken ceramics classes even knew the word, but it sounded nice.

Meredith’s wedding was scheduled for the day after her graduation from med school. An M.D. and an M.r.s., all in one weekend, we joked with her.

At some point, Meredith and I and all the other bridesmaids started calling Theo’s “the shithole.” It might have been the merchandise: Theo’s stocked all styles, from the elegant to the — well, kind of tacky, to our eyes at least. Or it might have been the store’s periodic clearance sales, where brides-to-be were rumored to fight — to have physical confrontations — over deeply discounted gowns occasionally. But mostly I think we called it “the shithole” to allay our discomfort about partaking in these bride and bridesmaid rituals, which honestly just felt weird to us.

The wedding was great, with a waterside setting, a truck full of beer, and a pig roasting on a spit. Meredith managed the role of bride well enough, looking great but not exactly relishing the attention. By the start of the reception, she’d abandoned the shoes. The dress stayed on, but its hem was damp and black and a little bit torn by the end of the night, from all the reveling. When it was all over, she handed the dress off in a big ball to her mother and told her to do whatever she wanted to with it. The dress had served its purpose. Now it was onto the marriage, and back to work.

Elisabeth Dahl’s first book, a novel for children entitled Genie Wishes, will be published by Abrams Books in 2013, and she has just completed her second book, a novel for adults entitled Brood. Her writing has appeared at NPR.org, at TheRumpus.net, and in Urbanite. A Baltimore native, Elisabeth returned to the city in 2003, after a decade in Berkeley and DC. Her website is elisabethdahl.com.