When the presidential candidates square off for their final debate on October 22 at Belmont University in Nashville, Tennessee, something more meaningful than political discord will penetrate the noise. The Unity Flag Project, an undertaking born from the vision of Dr. Meaghan Brady Nelson, Ph.D., assistant professor and program director of fine arts at Watkins College of Art at Belmont University, will serve as the backdrop to the debate stage. The series of hand-painted flags, representing over thirty states, symbolizes the idea of bipartisan unity.

Dr. Nelson conceived of the project to build what she has termed “purple empathy.” Nelson calls purple empathy “the action of understanding, being aware of, sensitive to, and vicariously experiencing the feeling, thoughts, and experiences of another’s political views, expressions, experiences, opinions, understanding, intentions and decisions.”

Similar to the blending of red and blue on an artist’s palette to create purple, the optical blending of blue and red come together to create purple empathy, she says, or civil bipartisan discourse through the visual arts.  In effect, the canvas acts as the “safe space” on which to foster expression.

Nelson enlisted artists from all over the United States, inviting them to paint an image on a three-by-five-feet canvas that reflects both their own state flag and that of America.  Thanks to a family connection in Nashville, the Boyce family of Ruxton was asked to represent the state of Maryland.

When their canvas and supplies arrived in June, Graham and Liz Boyce knew they needed help.  They immediately turned to a lifelong friend, Genie Arnot, founder of the Social Studio, a community arts academy in Roland Park.

Genie, who taught lower school art for 11 years, opened the Social Studio in the fall of 2019, just before the pandemic.  Despite the impact COVID had on many local small businesses, Genie expanded by offering virtual classes to children and adults as well as a daily sketch challenge on social media.  True to her mission, Genie’s efforts not only gave her clients an outlet during uncertain times but, in doing so, created a community of artists and creators.  Genie’s goal has always been to “support and guide individuals from problem through process to meaningful and diverse products.” It made the Social Studio the perfect fit for the Boyces and the Unity Flag Project. 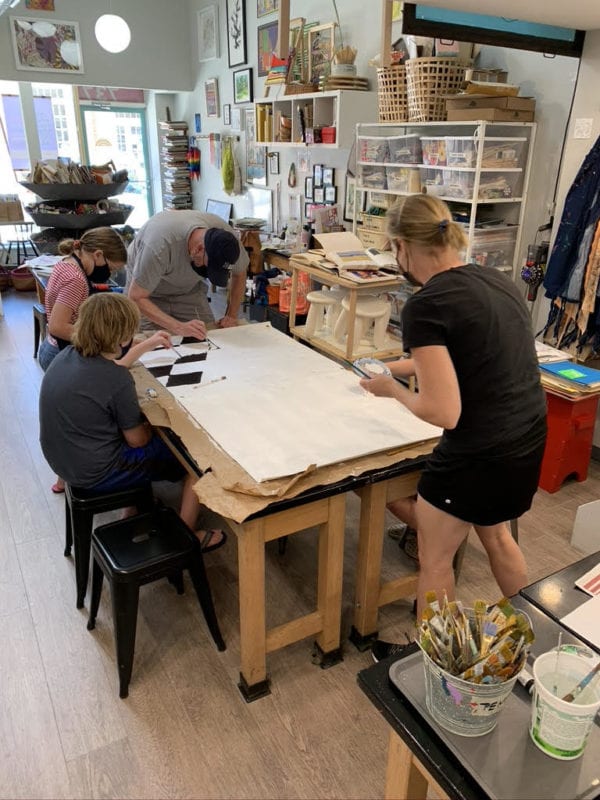 As restrictions lifted, Genie worked with the family in her art studio on Deepdene Road.  She began by asking them, “How do we show purple empathy and unity in a state flag?” Genie led them through the phases: explore, engage, express, exchange, expand, and empower. Each step of the creative process helped to combine the individual ideas into something clear and complex.

Liz jokes that she and Graham “buttoned it up,” allowing Genie to work directly with their children, Davis (13) and twins, Huston and Macey (10), guiding them through a vision of the flag with probing and thoughtful questions. 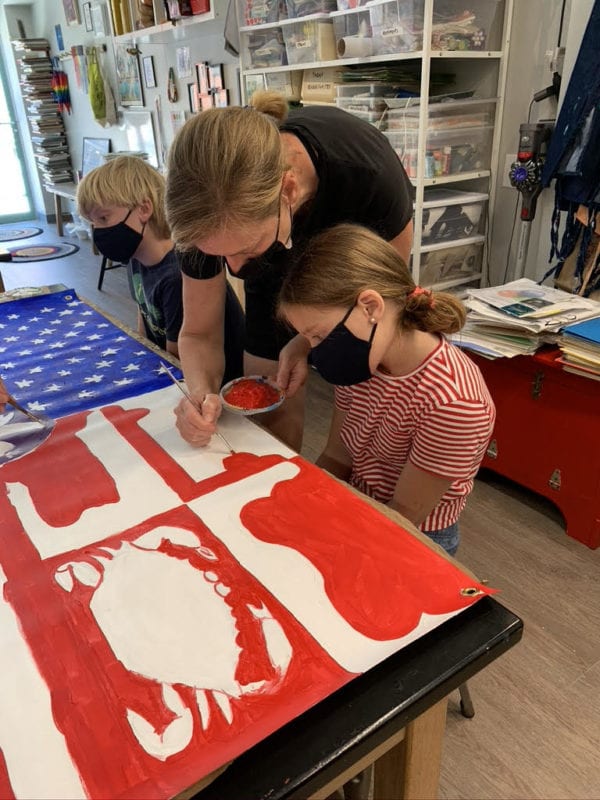 Together, they focused on the idea of morphing, both the two flags and their ideas.  The result, Genie says, is a flag that captures “unity and our commitment to working together through our past into our future as individuals, Marylanders, citizens of the U.S and stewards of the world.”

As Macey puts it, “We morphed everything together to make one cool design and we used equity and symbols that represent the U.S.”

The flag shows four quadrants, two for the American flag and two for the Maryland flag.  The stars of the American flag morph into hands, which become symbols of individuals, diversity and the Black Lives Matter movement.  Similarly, the stripes turn pink before morphing into waves.  This transformation represents the LGBTQ and pansexual communities, as well as the importance of water as the state’s east-west border and the global climate crisis.  The black and yellow of the Calvert family coat of arms in the state flag morph into books while the Crossland coat of arms become crabs.  The four quadrants are united by a central dove figure to represent peace and the spread of purple empathy in all directions.

The project was especially meaningful for the Boyce children.

“I liked the cooperation of everyone.  Sometimes we disagreed but eventually pulled together. It’s a protect like we have never done before,” says Huston.

Nelson notes how inspired she was by the project’s success. “As I critically read the visual of each one, I became overwhelmed with a feeling of connection and community deeper than I have ever experienced through collaborative artmaking,” she said in a statement.

For Davis Boyce, “This project was our little way to give a small sign of how we want to relate to the citizens of the U.S.  It’s our way of uniting people.  While it’s not a big deal, it’s our little contribution.”

The installation, which hangs in the Leu Center for Visual Arts at Belmont University, can be viewed online at www.unityflagproject.com.