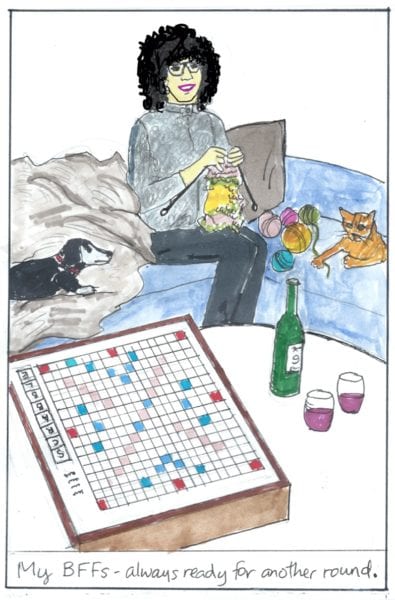 I don’t know if I’m going soft in my old age or what, but I didn’t hate the holidays at all this year. From the morning I ran outside barefoot in my bathrobe to give the garbage men a twenty-dollar bill, it was just one sweet moment after another. Since my children don’t live here anymore, it was lovely to have a couple of them return. Jane helped me get the Christmas tree and Vince found Chanukah candles for 89 cents a box. Then I cooked their favorite dishes as they sat side by side on the couch joyously playing Mario Kart on the Nintendo Switch. Hayes and Maria were in Ecuador with her family but showed up on Facetime at key moments.

As usual, food brought me gladness. The latkes were just about perfect this year. The new baguette recipe I tried is definitely crustier and has more air holes. The red and green chips they sell at Giant made very pretty Christmas migas. Vince shucked dozens of oysters which we sucked down raw, then he made an incredible Hangtown Fry with the last few. I love cooking with Vince. In between bouts of meal preparation, we watched Beat Bobby Flay, drunkenly shouting critiques at the contestants. (We had infused the Tito’s with jalapenos for Bloody Marys.)

Problem-solving is one of my most reliable sources of satisfaction year-round, and this season’s batch of booboos began with a bang on December 21 when I lost my credit card. But I quickly remembered the last place I used it — the liquor store in Red Hook, New York, when I was picking up Jane from college. Sure enough, they had it, so I didn’t have to cancel and get a new card number. Joy! Then I figured out how to play a movie using the laptop with the HDMI cord when Netflix wouldn’t work on the TV, and went on to solve the problem of no longer owning a CD player by discovering that you can play CDs on a DVD player. So we got to hear my friend Hilry’s holiday compilation after all.

My friend Sandye came to visit, which means Scrabble. I apprised her of the newest two-letter word on the tournament word list – EW – and went on to win four games in a row, with many seven-letter words and scores in the 400s, which made me feel optimistic about the decade ahead, and if I lost three straight after that, oh well, so what.

My happiest moment of all combined problem solving and homemade pasta. Many years ago, I wrote an article for the Baltimore Sun about making pasta from scratch and I got a free hand-cranked pasta machine out of it. This resulted in a Christmas Day tradition of handmade fettuccine Alfredo. I whip up the dough and the kids do the noodles, which are set out to dry all around the house, very festive, until it’s time to boil them up and add the butter, cream and parmesan cheese. This ode to deliciousness has become our Christmas ham, or goose, or whatever the thing is that you’re supposed to eat on Christmas.

So the first thing you do is make the dough in the food processor – flour, oil, eggs, and in ten seconds it turns from gooey yellow and white slop into a nice golden ball, which you put under an overturned bowl to rest for a half-hour before you start kneading it with the pasta machine. I got down my 30-plus-year-old Hamilton Beach food processor, given to me by my late mother back when I thought I would never use such a bourgeois item. Oh, Mommy. Feeling as much love as you can possibly feel for a kitchen appliance, I put in the ingredients, and…

It would not turn on at all. I could tell this was because the top part wasn’t locking down correctly, and I fiddled with it for about ten minutes, feeling more and more anxious about the slop inside. Vince came over to help, confident at first, then gave up. What the hell to do? I couldn’t imagine you could achieve the desired result with a blender, or a hand mixer, and everybody I’m friends with in the neighborhood was out of town, except one family who did not have a food processor, so I tried a few people I’m not friends with, and they didn’t answer their phones.

One of the bad things about getting old is how fragile my nerves are and how fast I can go from zero to nervous breakdown. This broken food processor was Code Red. Total disaster. Christmas without homemade fettuccine would not be Christmas at all. At this point, I considered taking a Valium but I only have two of them so I have to be very strict in my definition of an emergency. My heart was pounding, my armpits were damp, but I decided to try to go unmedicated in case things got even worse. Meanwhile, the yellow and white mess was sitting there in the broken food processor, looking as hopeless as I felt. 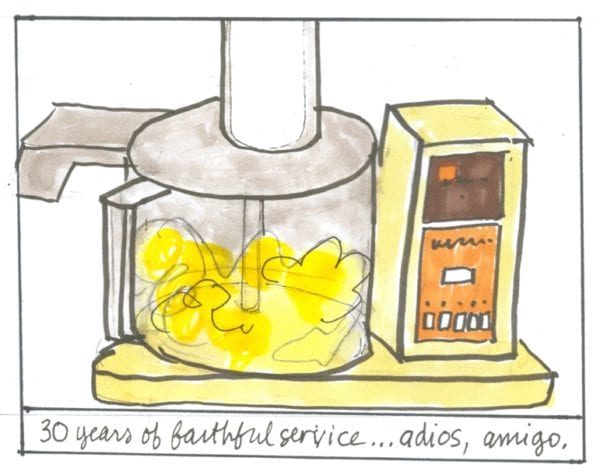 I began frantically googling, thinking surely I would find a recipe that did not call for a food processor. Well, no, I did not. But about then I realized that people all over the world were making pasta long before there even were food processors, so there had to be a way. I bravely scraped the glop into a bowl and plunged into it with a spoon and by hand. I had to add another egg to get any kind of workable texture, and that was the last egg in the house, but unbelievably, gradually, I made something like a golden ball. A sort of dappled one. I put it under the bowl and poured myself a shot of whiskey.

Next year when I start whining about the holidays, somebody remind me.