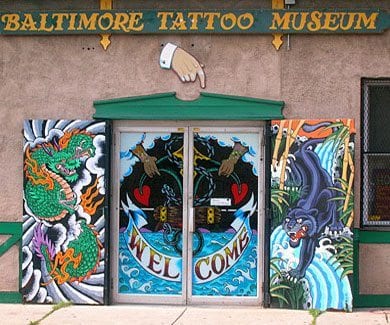 James Forrester, a piercer at Fells Point’s Baltimore Tattoo Museum and longtime bassist, was fatally shot near his workplace last night, according to city police.

Forrester was found in the 1500 block of Eastern Avenue on Monday at around 7:30 p.m. Officers who responded for an an aggravated assault report discovered the 43-year-old being treated by medics. He was transported to Johns Hopkins Hospital, where he passed away.

An autopsy performed this morning revealed Forrester was shot once in the chest, police said. Homicide detectives are seeking witnesses and surveillance footage to try to identify a suspect.

The Sun’s Justin Fenton first reported Tuesday that friends of Forrester said he was an employee at the tattoo museum located on the same block where he was shot. A Facebook search confirms he worked as a piercer at the Fells Point museum and parlor dedicated to body art and its history. He lived in Ranson, W.V., which sits eight miles west of Harpers Ferry.

According to The Obelisk, an underground music site, Forrester played bass for stoner rock groups Foghound and Serpents of Secrecy, and co-founded doom rock band Sixty Watt Shaman in 1996. Here’s a link to Foghound’s 2014 album “Quick, Dirty and High.”

Forrester had reportedly been experiencing health problems stemming from a blood clot and a problem with his hip. Foghound’s Bandcamp page says all proceeds from music sales were going to “Rev Jim & his family during his illness & recovery.”

Roughly two hours after Forrester was killed, a 19-year-old male was also fatally shot in the 3500 block of Pelham Avenue in Belair-Edison. Anyone with information about either killing is asked to call detectives at 410-396-2100 or Metro Crime Stoppers at 1-866-7LOCKUP.