The truth of policing in Baltimore can feel like fiction. Pick up the Sun or scroll through social media on any given day, and you could be experiencing a production from Barry Levinson or David Simon.

Baltimore streets have served as a backdrop for law-enforcement morality tales – real and fictionalized – for decades. In Justin Fenton, the tireless crime reporter for the city’s largest news organization, they have their latest chronicler.

Fenton’s first book, “We Own This City: A True Story of Crime, Cops and Corruption,” published in February by Random House, tells the story of the Baltimore Police Department’s Gun Trace Task Force, an elite unit designed to get weapons off the streets.

Instead, from the moment of its founding, the task force was a “supergroup” of bad cops.

Members stole drugs and money from suspects, planted evidence to drum up phony charges and engaged in deadly car chases. Along the way, they lied to their bosses and evaded oversight for years. It’s a story made for the screen, and it’s heading there, thanks to Simon, a mentor of Fenton’s.

The book tells us not only about police officers, but of the city in which they operate. And that is one of its strengths: the dismal context in which the task force roamed and terrorized, and the forces that fueled their mission.

The task force was created in a Baltimore shrunken by decades of white flight and job loss, where crime exploded, schools failed and drugs became pervasive, all of which Fenton explores.

The book spans the years 2003 to 2020, reflecting the efforts of successive mayors to restore safety and prosperity – from Martin O’Malley, who imported a New York style zero-tolerance policing policy; to Stephanie Rawlings-Blake, who reined in police on a fateful day in 2015 in the hopes that city youth would be spared in the uprising that followed the death of Freddie Gray.

Police commissioners arrive with fanfare and leave in handcuffs. Ed Norris came from New York, promoted the “broken windows” theory and “stop and frisk” — and was convicted of using a slush fund for his own purposes. Daryl DeSouza, a department veteran, was commissioner for four months before being charged and then convicted of tax evasion.  One recent chief, Kevin Davis, flat-out pegs it a dysfunctional department, seemingly resistant to change.

It is a department where overtime flows without oversight, and where the most objectionable cops can get promoted.

Fenton makes it clear why it’s hard to catch bad cops: not only do they control the flow of information to their bosses, but they know the tricks of investigations. In one memorable scene, the FBI plants drugs, money and surveillance equipment in and around an RV parked in an I-95 rest area, then summons the Gun Trace Task Force to investigate. But the cops smell something fishy, and decline the assignment. The task force members escape their fate for a time. But they are ultimately arrested and convicted.

Any one of the huge events that take place in Baltimore over the course of “We Own This City” seems to merit a book of its own. The city enters consent decree with the U.S. Department of Justice to change its policing practices. An energetic young prosecutor, Marilyn Mosby, charges police officers with murder and other crimes after Freddie Gray’s van ride. None are convicted, and crime soars. A police detective, Sean Suiter, is killed by a bullet in an alley a day before he is to testify before the FBI, and investigations fail to dispel doubts that it was suicide.

All of these stories and characters are still churning. Baltimore remains a work in progress.

As anyone who has spent time in Baltimore’s trenches knows, it’s not easy to find hope and heroes. There isn’t much of either in “We Own This City,” but it’s not giving away too much to note that the title has a double meaning.

But so did the community leaders who demanded justice after Freddie Gray’s death, and who channeled their energy even more productively following the killing of George Floyd in 2020.

We hear from all of them in Fenton’s book. And while there are few solutions, there are still many who feel responsible for the city they feel they own. [Disclosure: I am a former longtime Sun reporter and editor who worked closely with Fenton on numerous stories; I’m familiar with — and am an admirer of — his writing and his reporting.]

BFB: You’re a daily journalist, and you are also to take a step back with big-picture stories and investigations in the Sun. Still, writing a book is different. How was the process of backing away from daily journalism, yet working in the same subject area of what you report on every day?

Fenton: I like to be in the trenches. I like to be reporting on things as they’re happening and trying also to write deeper dive things. I was a little nervous about writing the book, but it was it was very rewarding. I really enjoyed the process of being able to tie things together that were all covered during the course of my newspaper reporting, but are still difficult to tie together. And there would be things I was coming across in my daily reporting that wouldn’t necessarily be a standalone story – extra details. In the context of the book, they were really important things to have.

BFB: The central character in the book is really Wayne Jenkins, a police officer who became sergeant and was part of the Gun Trace Task Force. Was that an easy decision or a hard choice?

Fenton: Once the decision was made it was obvious, but I will confess that from the outset, as I was looking at the story, I felt like I was on the 50-yard line of a football field and I was looking out into the stands and every seat was a character. Jenkins’ career was really convenient for this exercise. He began in 2003, and that allowed me to trace his career through the police department’s recent strategies.

I wanted to pick up right where Jenkins started, and the agency that he was coming into, which was an agency engaged in zero-tolerance policing. And then you can follow his career as new commissioners and new mayors take over with their own strategies, and the trouble he’s getting into, and the questions that are being raised…. It just sort of all clicked into place, it allowed me to tell the story of a city, and how we got to this place.

BFB: Jenkins is a nuanced character – respected by many of his colleagues. What was the turning point when he went bad?

Fenton:  There’s a very complex answer to that.  I was not aware of Jenkins prior to the indictment. You know, [at the Sun] we cover homicides, we cover neighborhood concerns, we cover policy when the white shirts go before City Hall.

The work that Jenkins was doing was extremely important to the agency, but it was the kind of stuff that doesn’t get a lot of attention by the daily newspaper. In trying to consider an officer to focus the story on, he wasn’t just an anonymous officer, he wasn’t just another plainclothes cop. They viewed him as one of the best, and we now know he was one of the worst — that’s just an extraordinary juxtaposition.

He’s sending out emails every morning to make sure everybody knows how good he is working. But there’s really no follow-up; there’s nobody’s following those cases to court to see that they’re falling apart because there wasn’t good police work.

BFB: I read this book and I was looking for positives, and glimmers of hope, and there’s not a lot to find. What’s your takeaway of the level of dysfunction in this great American city?

Fenton: One of the things that emerged to me was how difficult it can be to tell what’s going on. I think a lot of people came out of the trial [of Gun Trace Task Force members] thinking that everybody’s doing this, from top to bottom, from the commissioners down to the street officers. But in my conversations, I just continually heard people say that’s simply not true.

I wanted the readers to understand that it’s not so out in the open necessarily, and here are some of the people caught in the middle.

It’s like a chicken-and-egg thing. We were constantly going through commissioners, because of all the problems. [Former] Commissioner Bass said recently that he felt as though nobody really respected him, in a sense that they felt like he would be gone soon. When you have a commissioner going to prison, when you have mayors going to prison, there is this perception that the folks at the top are just gonna keep keep churning and you can keep doing what you’re doing.

BFB: What was the most surprising thing you learned?

Fenton: People across the board felt like this wasn’t a detectable thing. And what I mean by that is, I talked to the defense attorneys who would say:  “Yeah, my client told me that he got robbed, but who’s gonna believe that?  I’m not going to bring that up. That’s not going to help.  He did have a gun in the car. He did have drugs in the car. Why are we going to admit that and try to make some claim that can’t be proven?” And you know that’s just a really sad, but understandable.

BFB: At what point in your career did you say “yeah I got a book in me”?

Fenton: At least once a year I try to write a narrative-type piece, but writing a book had not been something on my mind. I don’t think I had the confidence in myself to do that, and even now … this is a 350-page book that covers 15 years. I don’t really if I could necessarily write a book about a more intimate story.

Toward the end of the trial, David Simon reached out to me and said he wanted to do a show about this, and that I should write a book. I said I didn’t know where to start, and he connected me with his literary agent. That began a year-long process, really, trying to get the proposal in order and get people interested in it. I think that was about the trust he had in me having been a reporter covering this stuff for as long… I felt the responsibility to do a good job.

Justin Fenton has twice been nominated for a Pulitzer Prize, and his first book, “We Own This City,” will be turned into a forthcoming HBO miniseries. He will be discussing his book at a Writers LIVE! event hosted by the Enoch Pratt Library on Thursday, May 20 at 7 p.m. Event registration information can be found here. 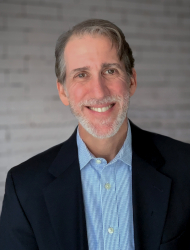 David Nitkin
Executive Editor at Baltimore Fishbowl
David Nitkin is the Executive Editor of Baltimore Fishbowl. He is an award-winning journalist, having worked as State House Bureau Chief, White House Correspondent, Politics Editor and Metropolitan Editor at the Baltimore Sun. He has also worked at newspapers in New York and Florida. David also holds a Masters Degree in Public Policy from the Harvard University Kennedy School, and has served in communications and policy positions for the Howard County Executive, the Maryland Attorney General, and the Johns Hopkins Health System.