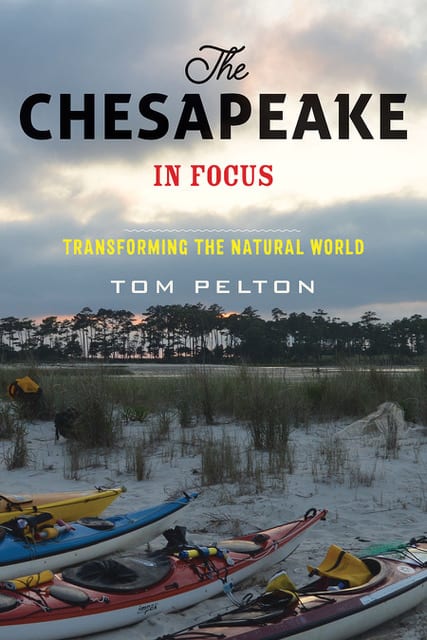 Even if the story about the person who fell off a party boat into the Inner Harbor and died the next day is an urban legend, we all know the Chesapeake Bay is in trouble. I just googled: the last three headlines in the Baltimore Sun on the topic have been “Chesapeake Bay’s weakened federal partner takes another hit,” “Chesapeake Bay’s grade drops to a D+ in 2018 report card,” and ” ‘Code red’ for the Chesapeake Bay.”

Whether you’re a nature lover, an oyster and crab maven, a sailor, or just a citizen of this region, it’s a good time to take look at Tom Pelton’s 2018 book, “The Chesapeake in Focus” (Johns Hopkins University Press), a sweeping narrative that leverages the author’s decades of environmental reporting to create a multi-faceted portrait. Pelton’s combination of nature and travel writing, personality profiles, political analysis, and scientific storytelling will be familiar to listeners of his public radio program, “The Environment in Focus.”

Though there are bright spots in the picture, much of what he has to tell us is terrifying, disgusting and infuriating, and Pelton’s calm reportorial style makes it even more so.

He begins by introducing each of the waterways that flows into the Chesapeake — its father, the Susquehanna, which brings so much trouble down from unregulated Pennsylvania, as well as the Gunpowder, the Corsica, the Patuxent, the Potomac, and the James. Each chapter begins with a visit to the waterway in question, a narrative of a canoe, kayak or camping trip. 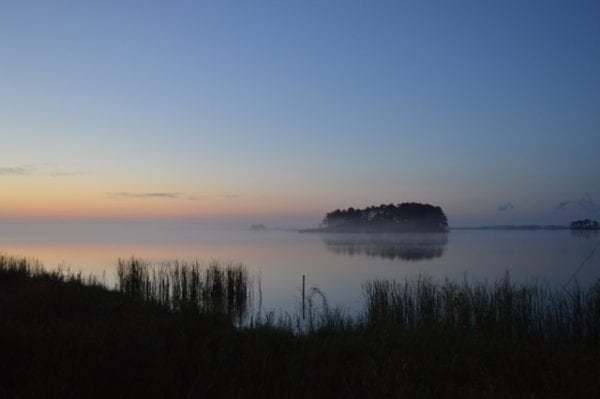 “Sun penetrated all the way to the rocks on the bottom, which shimmered gold. Swarms of tiny fish darted in and out of ribbons of grass that had flowerlike stars. A smallmouth bass flew through the underwater forest, followed by a whiskered catfish.”

No, he’s not fly fishing in Utah… he’s canoeing on the Potomac River, which “during much of the twentieth century was the sewer of the District of Columbia, with feces from the White House and Congress and everywhere else pouring in.” This turns out to be one of the more upbeat passages in the book since the capital city has since made other arrangements for its waste. Elsewhere, unfortunately, cows, chickens, farmers and real estate developers have not.  Between the manure, the black algae and the mutant fish, you’ll need a strong stomach for this book.

We caught up with Tom Pelton to ask a few questions.

Baltimore Fishbowl: Many of us have heard that our shellfish situation on the mend. Is this true? Give us the report.

Tom Pelton:  On the mend?  Yes and no. Some Bay fund-raising organizations have made a big deal out the fact that oyster populations in the bay have risen slightly because they think good news is more likely to bring in donations. But this is misleading. The reality is that severe overfishing and mismanagement of the bay caused the Chesapeake’s oyster populations to plummet to a third of one percent of historic levels by 2010. Imagine if you had a forest of 1,000 trees, and then you cut down all but three. That’s where we were in the bay about a decade ago, with diseases and pollution also playing lesser but contributing roles in the decline. Even if the Bay still looks beautiful on the surface, the bottom is a muddy graveyard.

The estimated number of oysters in the bay doubled after former Governor Martin O’Malley in 2009 took the long-overdue step of protecting 24 percent of the bay’s remaining oyster reefs with no-harvesting zones.  But even that didn’t stop watermen from ripping up shellfish from the remaining oyster reefs.

What is desperately needed is a step I advocate in my book: a moratorium on harvesting wild oysters – especially by power dredging, in which power boats drag heavy metal rakes across the bottom, tearing up all forms of life in their path. We need to move to raise 100 percent of our oysters in underwater farms. It’s time to stop the madness by transforming the entire Chesapeake Bay into an oyster sanctuary, at least until oysters can reproduce enough to recover a quarter of their previous numbers.

BFB: And what about crabs?

TP: Blue crab populations in the bay have rebounded from an historic low point in 2007.  The main driver of the decline was – again – overfishing, with watermen every year harvesting as many as 70 percent of all adult crabs in the bay.  Virginia played a major role in the recovery by prohibiting the destructive annual wintertime tradition of watermen dredging hibernating females, full of fertilized eggs, from the mud at the southern end of the bay, preventing them from reproducing.  Maryland also restricted the catching of female crabs. As a result, the estimated number of blue crabs in the Chesapeake rose by almost half.

But blue crab populations vary widely from year to year, depending on winds and temperatures, which have a major impact on the survival of juvenile crabs. So although the management of blue crabs in the Chesapeake has definitely improved, the crazy weather we have been experiencing with climate change could have an unknown impact.

BFB: What’s up with Pennsylvania? They seem to be responsible for a large part of the bay’s troubles.

TP: Pennsylvania dumps more than twice as much nitrogen pollution (the Bay’s biggest killer) into the Chesapeake as Maryland, and far more than any other state in the watershed. Pennsylvania is home to 40 cities and towns – including Harrisburg, the state capital – that still have antiquated sewer systems that are combined with their stormwater pipes so that whenever it rains, raw human waste gushes into the Susquehanna River and eventually the Chesapeake Bay.

BFB: Why would they do this?

TP: It’s the politics of rural America.  Unlike Maryland and Virginia, Pennsylvania has no shoreline on the Bay and no culture of eating blue crabs.  So elected officials in Pennsylvania see no upside to imposing regulations or fees to benefit a Bay they never see – and not enough of them realize that it’s their own local streams and rivers that are also suffering.

The Pennsylvania General Assembly is dominated by rural Republican lawmakers who are hostile to the very idea of government regulation of farms, and who aggressively strip the Pennsylvania Department of Environmental Protection of funds and personnel. The only solution to this kind of irresponsible dumping on downstream neighbors is a strong and well-funded EPA so that the feds can crack down on backward states like Pennsylvania.

And that idea will remain almost laughable as long as the federal government is closed due to a budget crisis.

BFB: Ah, the shutdown. Your book contains many references to the effects of Trump’s policies, none of them good. Tell us about the more recent developments we have to thank Donald for.

BFB: Speaking of Trump, one of the strangest parts of the book is the guy who lives on a disappearing island but doesn’t believe in climate change. Tell us about this.

TP: Tangier Island, Virginia, in the southern Chesapeake Bay is a historically rich and physically beautiful community of watermen that is rapidly being washed away by rising sea levels, driven by climate change, as well as by the natural subsidence of the land. The town is led by a crabber, Mayor Ooker Eskridge, who spends much of his time lobbying government officials in Richmond and Washington DC for government funds to build a wall to protect his island from erosion.

TP:  Mayor Eskridge – like many others on Tangier Island – are hard-core Republicans who strongly support President Trump and don’t believe in either climate change or sea-level rise.  When Eskridge talks about the crisis threatening his community, he describes it as a problem of eroding land instead of rising waters, and he doesn’t accept that the rising seas are worsening that erosion.

BFB: The nature writing and the photography in the book are outstanding. Do you also do travel writing?

TP: Thank you!  I’ve never done travel writing, per se, but for many years I wrote about environmental issues for the Baltimore Sun and enjoyed weaving in descriptions of Maryland’s natural world into my newspaper stories.  Also, my weekly “Environment in Focus” public radio program on WYPR (which airs Wednesdays at 7:45 am and 5:45 pm on 88.1 FM in Baltimore) are often like mini-adventure tales, in which I head out in my kayak to explore some sinking island in the Bay or weird corner of the natural world.  That’s my favorite part of being an environmental writer: getting outside and spending hours just floating down a stream, my eyes on the treetops and my mind free.

What Chesapeake Bay experience should we all have before we die?

TP: The Chesapeake Bay experience I would recommend for everyone is to go kayak camping down the lower eastern shore of Virginia.  Start on Hungar’s Creek near the tiny town of Machipongo, Virginia, and head south along the spectacular beaches all the way past Cape Charles to the mouth of the Bay, at the Eastern Shore National Wildlife Refuge.  Camp on the uninhabited, sandy islands.  Swim in the creeks swarming with fish.  Wake to see your tent and the marsh grass around it covered in glittering diamonds of dew.  It’s one of the last (mostly) untouched stretches of Chesapeake Bay beach left…with long stretches, featuring pine trees towering over the sand, looking very much like they must have when Captain John Smith stepped ashore on them more than four centuries ago.  Explore it and enjoy it before it’s gone.