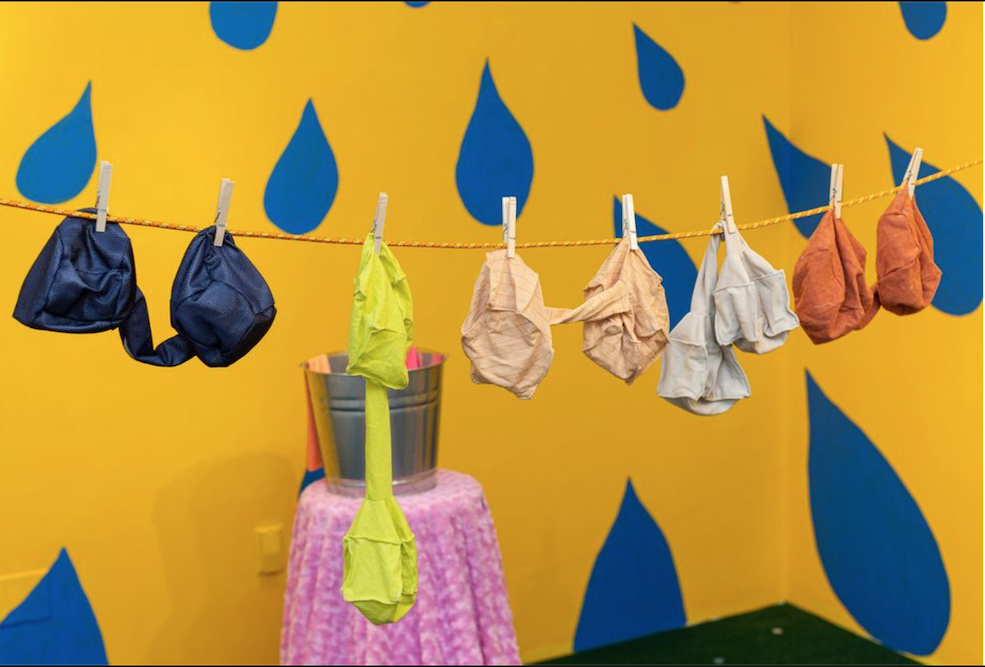 To submit your calendar event, email us at [email protected]

CulturalDC is partnering with Baltimore-based curator Teri Henderson to present a two-part video exhibition that explores divisiveness in democratic countries and the history of racial injustices within the United States. The exhibit, “SUBVERSIONS,” will be projected onto the windows of CulturalDC’s Source Theatre in the historic 14th and U Street Corridor in Northwest Washington, D.C. The first installation in the series will be presented during the 2020 presidential election season. The second installation will be presented in early 2021 to coincide with the presidential inauguration.

The first video, “UNITED IN DEMOCRACY: Polarization is a weapon for the perpetuation of power,” is a geopolitical game by artist Miguel Braceli. This video is part of Braceli’s “Geopolitics of the body,” a series of performances that creates dialogue between people and place, inviting reflections on issues of migration, national identity and social fractures.

From Oct. 30 through Nov. 30, “UNITED IN DEMOCRACY” will be on view nightly from 6 to 10 p.m. at CulturalDC’s Source Theatre, 1835 14th St., NW. On election day, Nov. 3, the video will be projected for the entire day. The video will also be available on the CulturalDC website.

“Recently it has become increasingly prevalent and relevant that we name and examine power, oppression and privilege,” said curator Henderson. “In this tumultuous period, the hopeful possibility remains that we may overcome tyranny and villainous rule by voting. In Washington, D.C., at this exhibition, we return to public art for solace, for hope, for provocation and for inspiration during this election period.”

“As a Venezuelan artist living in the United States, I have wanted to approach the geopolitical implications of these two countries, studying the complexity and contradiction of their relationships, as well as the parallels that can be found in opposite systems,” said artist Branceli. “This project starts from the thesis that political polarization is a risk for democratic states, and that at its pernicious extremes debate decreases and hegemony is strengthened. ‘UNITED IN DEMOCRACY’ aims to enhance diversity and unity in the context of an electoral year, promoting the dialogue from the playfulness of a simple action of a game.”

“Given the fact that millions of artists are being prevented from working due to the inaction of government, arts organizations cannot sit idly by during this upcoming election, said Kristi Maiselman, Executive Director of CulturalDC. “It is crucial that local arts groups, like CulturalDC, actively participate in democracy and offer platforms to diverse artists like Miguel Braceli and Teri Henderson. While we’re unable to host our community inside, we’re offering the outside of Source Theatre as a public place of reflection and mobilization.”

Judy Tallwing: What We Have Always Known
ongoing through December 27
@ New Door Creative

Apache Elder Judy Tallwing was the daughter of Ruby Browning and the granddaughter of Annie Oma and Archer Donoho. Of Apache, Tewa, and African descent, she was raised in a desert encampment at the foot of the Arizona’s Bradshaw Mountains. Reared to become her clan’s matriarch, and trained in medicine by her grandmother, Judy has vivid early childhood memories of living in the desert with her extended family. Her memories include helping to hunt rattlesnakes and making art. “We didn’t call it art, we called it making things to sell along the road to help the family survive. I love trying to bring the stories I’ve heard to life. Each thing that lives on the earth has its own energy, and I try to put those energies together to create healing.”

Judy travels to power places on the earth to collect tiny fragments to energize her painting and sculpture. Her works are meticulous, and charged with the energy of elements such as copper, silver, turquoise, garnet, ashes, diamond dust, and minute crystal prayer beads.

Her works are included in the collections of The American Visionary Art Museum, Baltimore, Maryland, The Heard Museum in Phoenix, Arizona, and The Smithsonian Museum in Washington, D.C. In 2014, she was invited as Artist-in-Residence at the Halles St-Pierre Museum in Paris, France.

The Golden Triangle Business Improvement District (BID) announces a collaboration with the Smithsonian to expand the Smithsonian American Women’s History Initiative – Because of Her Story into the streets of Washington, DC — offering locals and visitors the opportunity to enjoy museum-quality art outdoors.

Launched in 2018, the Smithsonian American Women’s History Initiative is one of the country’s most ambitious undertakings to research, collect, document, display and share the compelling story of women.  Monument and Marker represent the only public space artworks of the American Women’s History Initiative reaching beyond the walls of the Smithsonian.

Formed from sticks and branches, Monument is part of Hassinger’s Monuments series — a group of sculptures first installed in Marcus Garvey Park in Harlem in 2018. Selected to complement the built environment, the artwork echoes the curvature of the Connecticut Avenue overlook and mirrors the shape of the underpass below. Monument honors the physical and social achievements of the community and celebrates the possibility of humans working together.

“I am honored to be among the first selected to create a public sculpture as part of the Smithsonian American Women’s History Initiative,” said Hassinger. “Monument will nestle appropriately in the selected space and will remind us in a gentle way of our origins and purposes.”

Hassan’s Marker is a monument to women’s histories and the fibers that connect us all. Based upon the artist’s knitting, the sculpture’s bright pink hue and bold steel shape are contrasted by its curvy and elegant forms. The artwork can be read as an oversized crown or an abstract knitting project that is at once unraveling and coming together.

“There are so few statues dedicated to women—I’m excited to be creating a public art sculpture for one of the most iconic intersections in the city that will represent a monument to all women’s stories and their achievements,” said Hassan. “My hope is this monument, Marker, will act as a beacon to spark an interest in the stories shared through the Smithsonian American Women’s History Initiative, and also encourage people to think about the women in their lives, and uncover their own buried histories.”

“We are excited to partner with the Smithsonian to bring Monument & Marker to Connecticut Avenue,” said Leona Agouridis, Executive Director of the Golden Triangle BID. “The project builds on our longstanding effort to bring museum-quality art to the Golden Triangle and to enhance the beauty of the neighborhood. The art will enrich the public space at a time when Washingtonians are spending more time outdoors for recreation, dining, and cultural activities.”

“We are thrilled to partner with the Golden Triangle to expand the American Women’s History Initiative into DC streets,” said Dorothy Moss, curator at the National Portrait Gallery and coordinating curator for the Women’s History Initiative. “The initiative illuminates women’s pivotal role in building and sustaining the country and expands what we know of our shared history. Monument & Marker addresses themes related to women as makers, create conversation about public monuments, and look at the history of women in public and private life.”

Monument & Marker will be on display from October 2020 for approximately one year. View and download photos of the artworks here.

Hassinger will also create a new performance commission, Birthright, to premiere in May 2021 as part of the Smithsonian’s National Portrait Gallery’s IDENTIFY series dedicated to performance art as portraiture.

The National Museum of the American Indian’s Native Cinema Showcase is an annual celebration of the best in Native film. This year, for the 20th-anniversary showcase, the museum presents the full program online, streaming new films, fan favorite classics and conversations with filmmakers. The showcase provides a unique forum for engagement with Native filmmakers and stories from Indigenous communities throughout the Western Hemisphere and Arctic.

A global pandemic left many museums, theatres, and cultural institutions shuttered and pushed much of public life outdoors creating a great moment for people to experience public art. Simultaneously, protests and a racial reckoning sparked debate around public statues as Confederate monuments were toppled and burned and public artworks, most notably murals, were used to amplify the Black Lives Matter movement. While these two forces are distinct and different, both serve to make 2020 a notable year for public art. This talk will look at those two forces, alongside specific project examples and moments of note, and how they have shaped the landscape of public art in 2020.

This program is supported in part by the Maryland State Arts Council.