The email list in our neighborhood is an active one, what with people getting rid of furniture and gadgets, looking for plumbers and electricians, and calling for crews to pick up litter at Stony Run, the creek that runs along the edge of our three-block enclave. This posting about Bruce the Cat, complete with framed oil portrait, appeared one day in late February and turned out to be the first in a rather riveting series. But before we follow the drama of Bruce’s recent disappearance, let us begin with his origin story.

When Snowmageddon hit Baltimore in 2010, animal lover and aspiring pet portrait painter Amanda Nelson was living with her baby daughter in Hampden. The gray and white tom who haunted the alleys of their neighborhood had been annoying people with his yowling and spraying for quite a while — ever since he’d been abandoned by owners who moved away. He particularly enjoyed pacing back and forth on the neighbors’ windowsills to drive their dogs insane. So as the sidewalks were buried under foot after foot of snow, there wasn’t a big fight over who would take him in. He wintered with the Nelsons.

In hopes of finding him a home, or at a minimum to provide a little pro bono feline birth control, Amanda took him to the vet to be neutered and microchipped. She bestowed on him the temporary name of Bruce, the name she has given every stray she has taken in since her student days at Hamilton College.

As the story goes, one day a friend on campus encountered an unbelievably huge and utterly disgusting creature — was it a bug? could a bug even be that big? — crawling out of the closet of his dorm room. He was too scared of it to step on it, so he picked up a lacrosse stick, squeezed his eyes shut, and smacked the vile thing into the next life. Just then, a student who lived down the hall hurried into the room. “Oh, no!” he cried. “Not Bruce!”

Bruce, it turned out, was his pet crawfish. And since that time, Amanda has honored Bruce by giving his name to any unmoored pet who washes up on her shores.

When she couldn’t place the newly neutered and microchipped Bruce with an owner, Amanda offered him the option of resuming his life on the streets of Hampden. But he didn’t seem to want to leave. “At one point,” Nelson recalls, “I had someone over at my house, trying to enlist their help in finding a home for Bruce. Bruce walked to the middle of my rug and pooped right there in front of us–something he never did before or since. I think he was trying to tell me he had already found his home.”

He eventually became a kind of older stepbrother to an abandoned litter of kittens for whom Amanda had been unable to find homes, and a few years later, the family moved to Evergreen.

In the past, Bruce has been known to go missing for days at a time, and he always comes back. But somehow the disappearance this February was different, at least according to Amanda’s mother, Mary. Mary lives in Bethesda but visits a lot, and had become very attached to Bruce over the years, keeping him at her house when Amanda goes out of town. She felt in her bones that this time, they could not leave his return to chance. So while Amanda posted the first notice about Bruce on the listserv, Mary contacted a pet detective for assistance.

The pet detective helped them orchestrate a blast on social media with a cash reward, and made them a poster to put up at all points of ingress and egress to the neighborhood. She explained that according to recent research, a pet who wanders away from home can be in “flight mode” for as long as 10 days, so spooked that even if he hears his owner calling, he does not return.

At this point, Amanda posted a second notice on our listserv. 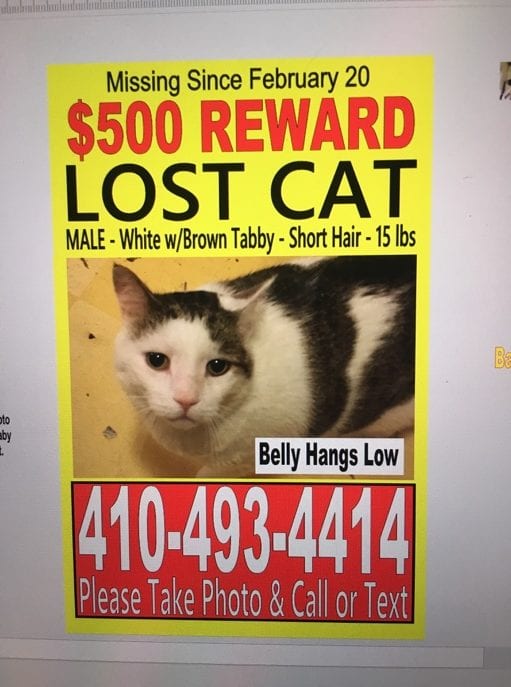 Bruce is still missing. We had Dogs Finding Dogs track him this morning and they advised me to lay down “scent strips” to help Bruce find his way back home. If you notice little squares of fabric along Wilmslow and the Stony Run trail, I’ve put them there for that reason and will pick them back up again after a few days.

The pet detective put Amanda in touch with an organization called Dogs Finding Dogs, an amazing group founded here in Baltimore in 2006 by Ann Willis. Dogs Finding Dogs tracks lost animals with a 97% success rate, having recovered more than 4,000 dogs, cats, ferrets, horses and reptiles to date. Their motto: “If it walks on the ground, we can track it.” They even have their own TV show, “Trackers,” on the Nat Geo Wild channel.

At 10 am on February 26, a tracker named Felicia arrived at Amanda’s house from West Virginia with Marmaduke, a huge German shepherd-type dog. She determined how long Bruce had been gone: six days. Long, but not too long. Then she asked Amanda to find something in the house with Bruce’s scent. She would also need an article of clothing with her own scent, torn into little strips, and she’d need to mix up a gallon of “chum” — wet cat food diluted in plenty of water.

Marmaduke took a whiff of Bruce’s favorite bedsheet and set off. Intermittently he would stop short and turn to Felicia. “That’s a hit,” Felicia told Amanda. This went on for about three blocks, heading down to Stony Run. There the dog gave a final nod — my work is done — and trotted back to the car.

The next step was to place strips of Amanda’s torn-up blouse and dribble the chum along the route Marmaduke had laid out, Hansel and Gretel style. “He’ll be back,” Felicia assured the Nelsons as she got in the car. “Probably today! Don’t worry.”

They wanted to believe her but as the day dragged on, spirits flagged. Since not everyone in the neighborhood had seen the email about not picking up the fabric strips, Amanda had to rush out a few times with more torn-up clothes to patch the trail. By 10 pm that night, she and her mother and daughter were all sitting around the living room, unwilling to go to bed. In the morning, it would be a full week since Bruce disappeared.

But wait —  what was that noise? One of the other cats? No, it was Bruce, at the front door!

Other than a little scratch over his eye, Bruce was none the worse for the wear. In fact, he was ready to go back outside in a matter of minutes. But Mary, who had been worrying about him for six days and nights, had had enough. Bruce has now moved to Bethesda, where he is living out his days as a house cat, sleeping in a fancy velvet cat bed and eating special senior cat food.

“My daughter didn’t want to give Bruce to my mom, but it’s impossible for us to keep him inside,” says Amanda. “Kids come over and they leave the door open just long enough for him to escape. But now we’ve had this massive social media blast with a $500 reward. Next thing you know, someone will see him on the street and come running up saying, ‘Hey I found your cat! Where’s my $500?'”

I’ll be picking up all the pieces of fabric first thing tomorrow.
Thank you all for your help and kind words!!