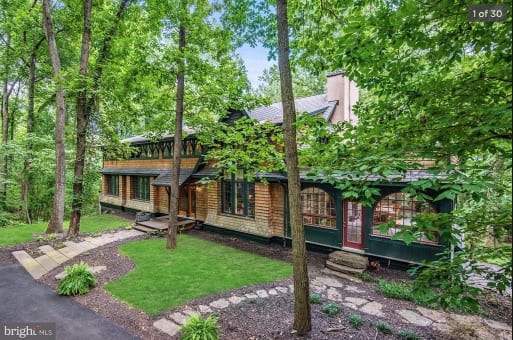 This Hot House is sponsored by Roofing Contractor in Baltimore, Four Twelve Roofing.

END_OF_DOCUMENT_TOKEN_TO_BE_REPLACED 8 Things to Look For When Buying a Horse Farm Here are 8 things to consider as you plan for the for the horse farm of your dreams. Our listing in Worthington Valley checks all the boxes, and just may be the farm for you!

END_OF_DOCUMENT_TOKEN_TO_BE_REPLACED

Happiness For Sale: 147 Acres, Barns and Stables In The Greenspring Valley END_OF_DOCUMENT_TOKEN_TO_BE_REPLACED

House of the Day: 63 Acres And A Dream. Thoroughbred Racehorse Farm In Greenspring Valley Glengar Farm-Stunning 63Ac. Thoroughbred Racehorse Farm in the Heart of Horse Country in Glyndon MD, Farm has 4 Residences, 4 Historic Barns Totaling 40+ Stalls, Six paddocks and Three High Capacity Wells. The Main House Boasts Commanding Views of Worthington Valley from a hill overlooking the compound. Farm also has no Restrictions and could be Subdivided One Time.Too Much Too List Call Today!
See This Property »

House of the Day: Resort Style Property In Glyndon, With Pool, Tennis, Pond, On 27 Acres

END_OF_DOCUMENT_TOKEN_TO_BE_REPLACED

Moat, But No Castle: A Zen House In Glyndon END_OF_DOCUMENT_TOKEN_TO_BE_REPLACED

“Cloud Seven” in Glyndon is not exactly obvious (check out the listing here). There is plenty that disappoints; the bad renovation (please, people, just stay in period!!!), the incongruent cutesy decor and the “crazy Aunt Janet liked to paint” artwork. Is that a turkey mounted on the wall? Enough said. However, there is an allure in the bones of the house. I mean, just look at the photo of the house at night. Magical, right? Well, a dig into Cloud Seven‘s past reveals a history that explains it all, including ties to one of the most celebrated pieces in modern design.
Cloud Seven was imagined by the renowned architect James Rose for Wilton Dinges in 1960. Rose’s design focus was the fusion of indoor and outdoor spaces (note the glass walls). He is widely regarded as one of the pioneers of modernism in landscape architecture (more on him here). No surprise then that Mr. Dinges hired him, as he shared his passion for design. In 1944 Wilton, an engineer, started the company Emeco which specialized in tooling and dyes. Yawn. A renowned perfectionist, he led the company to success with many perfectly practical products. Double yawn. Then, in an effort to invigorate his business, he decided to incorporate his love of sculpture (particularly Rodin) into his work. Simply put, he added some form to the function. It was with this new philosophy that he designed the Navy Chair (cue the collective design-geek sigh). Designed for use aboard Naval ships, the chairs were said to have a 150-year life and be able to withstand a torpedo blast. (Dinges threw one out of a sixth story window as a test; it had two minor scratches.) Perhaps also appealing to the Navy men was the rumor that the seat shape was based on Betty Grable’s derriere. Cute. Wilton had a hit on his hands and went on to produce thousands for the government. Fast forward to the late 1990’s when design aficionados started to go retro and homed in on the utilitarian objects produced during World War II…re-enter the Navy Chair. It wasn’t until a certain Philippe Starck (arguably the most influential designer alive today) began to use the chair in his projects, however, that a star was truly born (Philippe talks about the chairs here). The chair is now a world-wide trend you can find everywhere: bars, cafes and offices. (No joke, I saw a McDonald’s outfitted with them the other day). With all their popularity, there are many knock-offs, but it is heartening to know that Emeco (Mr. Dinges died in 1974) still produces the Navy Chair made with the very current 80% recycled materials.
Cloud Seven is currently on the market for $1,777,777, which includes the four-bedroom house, 40 acres, pool, barn and the bragging rights to all that cool history. I say buy it, embrace its modern-organic design and for the love of God . . . throw some Navy Chairs in that bad boy when you decorate!