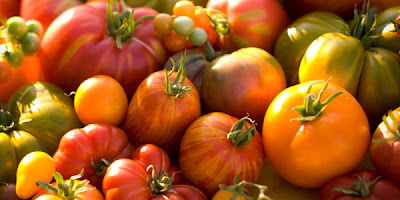 The tomato: The star of the summer produce season. Besides canning for cooking through the year, slapping a slice on top of a burger or the joy of simply slicing and eating (I like ’em with mayonnaise and Old Bay), another great way to capture the wonderful flavors of summer tomatoes is with a great homemade tomato sauce. I like to make a garlic tomato sauce from the kitchn (recipe follows) and then, sometimes, I just wing it. Sometimes I add carrots, peppers, olives, chicken stock, wine…make it spicy, make it sweet…always, always with fresh herbs from my garden. But no matter how I modify the sauce, I use tomatoes affectionately called “Tony Romas.” They come from One Straw Farm in White Hall, Md.

Tony Romas are kinda funny looking. I often see people at the market pick them up and examine them.  They are large Roma tomatoes that also resemble a pepper, very meaty with not much liquid in them and have so much flavor. My friend Joan Norman at One Straw told me the story of how she and Drew began growing them. She says, “A friend of ours worked with a man from Italy who’d just moved here and thought the tomatoes in the United States were terrible. He had his father send him some of his seeds from his family’s home garden in Italy. When our friend tasted the tomatoes grown from these seeds, he asked for a few seeds. He grew them for several years and then told us about them. He gave us a few seeds, maybe ten, that was about 15 years ago. We’ve been growing them and saving the seeds ever since. The first year, only a few of the tomatoes were eaten. Even then, the seeds were saved. And it grew from there.”

How nice that all these years later we get to enjoy these delicious tomatoes. 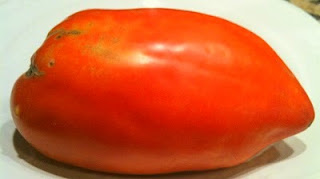 So, how did they get the name Tony Romas? Tony was a gentleman who shopped from and then later worked for Joan at the Waverly Market every Saturday and also out at Boordy Vineyards. Tony loved these long heirloom tomatoes so much that in the beginning he would buy all of them. (He came bright and early and brought delicious homemade sandwiches for Joan and her crew.) When there were enough of these romas for him, only then did he sell them to shoppers at the market. Favorite customers were offered these tomatoes first. If you tried to touch and squeeze them too much, you were off the list. He would carefully pick them up and put them in a bag and if you didn’t care for them, don’t expect to get any the following week. Tony was the guardian of these tomatoes. Sadly, Tony died at a farmer’s market one evening. He said he was tired and thought he should go home. Right there, holding a bag of these tomatoes, he turned to leave…and died. Tony is gone, but not forgotten by all of the folks at One Straw Farm.

I feel honored to be able to share in this great tradition. Tony Romas are my main ingredient when I make pasta sauce, although I also add yellow pear tomatoes, orange cherry tomatoes and all kinds of other heirlooms, whatever I’ve got on hand. A jar’s got nothing on me. 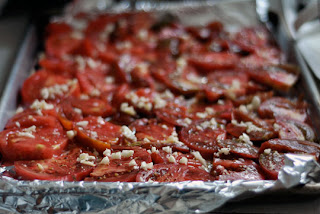 2 pounds fresh tomatoes
8 cloves garlic, peeled and minced
4 tablespoons unsalted butter
Kosher salt and freshly ground black pepper
Olive oil
Heat the oven to 350°F and line 9×13-inch baking dish with aluminum foil. (Note:This step is optional, but it will make cleanup faster.) Spray the baking dish with baking spray, or rub lightly with olive oil.
Chop the tomatoes roughly but evenly. Spread them in the baking dish. Stir in the minced garlic, a drizzle of olive oil, and about 1 teaspoon of salt and some freshly ground black pepper. Cut the butter into small cubes and scatter evenly over the tomatoes.
Bake the tomatoes for 2 to 3 hours. This is very flexible; you can bake them until the tomatoes simple begin to break down and release their juices. Or you can continue baking until their edges blacken, and the juices are reduced significantly. I baked mine for about 3 hours, and that was perfect for my purposes.
Read more at charmcitycook