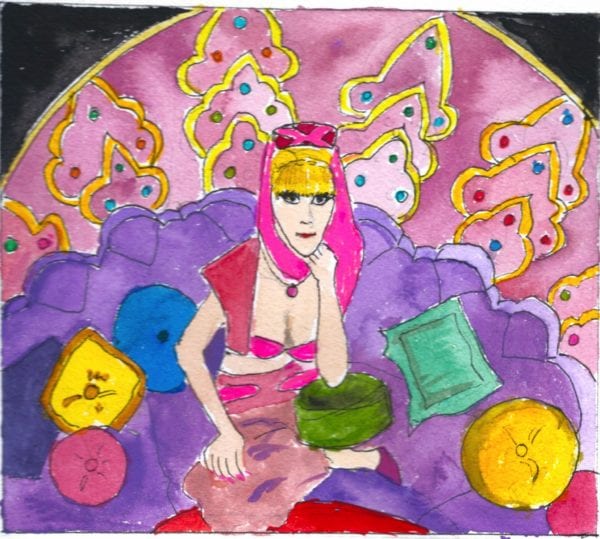 So far my high hopes for 2021 seem like major magical thinking, though I guess there is still a lot of year left. I only wish I felt like the captain of my destiny. I wish I could let go of everything that sucked about last year and start fresh in a completely different place. Like a remote beach in Thailand, perhaps.

Probably there is some way that these aches could be translated into New Year’s resolutions — off to Thailand! someday! — but resolve is the thing I need to resolve about. I feel like a blob. I haven’t had that thought in a long time but I used to have it all day every day in my early adolescence, when everything about me, physically, mentally, and emotionally seemed to be a hopeless sloppy mess. It’s nice to feel connected to my younger self. Depression as nostalgia.

I have been dreaming often about my parents; last night I was going back and forth with my dad about mailing a box of books I left in the house on Dwight Drive. It amazes me how they live inside me forever, the way I Dream of Jeannie and Larry Hagman lived in the TV when I was seven, putting on their show for us once a week and never changing a bit. To think that the premise of that show was a grown woman living in a bottle wearing a velvet brocade brassiere, unloved love slave to an idiot astronaut, never using her magic powers to change her own life — oy. And how we adored this show! Who can believe it even existed in our lifetime?

This longing to see my parents seeps into the daylight hours as well. I imagine looking up from my work and seeing my mother rolling in as she used to with her wheeled purple suitcase, in it the bottle of Beefeaters, can of Easy Cheese, and cache of Triscuits she always traveled with. She would sit right down and fix us both a cracker. This was one of her most beloved recipes, the creamy squirt of cheese and the crunchy checkerboard of wheat filaments a triumph of contrasting textures. Triscuits don’t taste as good as they used to, and the weird flavor powders (ginger and lemongrass, for God’s sake) definitely don’t help. Fortunately I like to cook a lot more than my mother did. 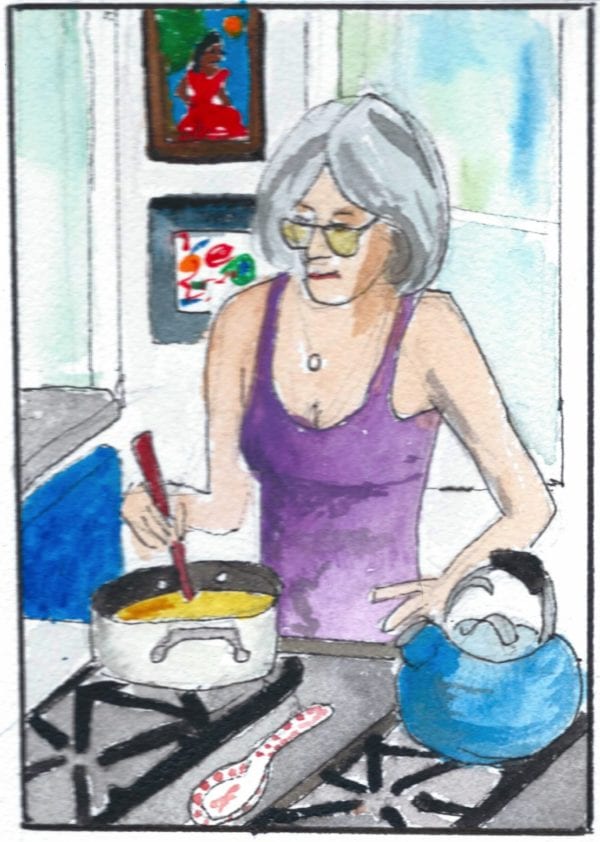 As the no good, very bad, downright terrible year came to an end, my house was empty but my larder was full, so while others were beginning boozeless January and stringent diet and exercise programs I poured a glass of wine and started cooking for myself somewhat obsessively. It began on New Year’s Day with the lucky food, black-eyed peas, brown rice, and greens from Ottolenghi Simple, which were so good I will include the recipe below.

The next day, I had a pasta dish made from leftover shrimp.  I am a big fan of shrimp steamed to order in the seafood department at Giant, and always try to buy enough so that after eating it straight up the first day, there will be leftovers to fool around with. Last summer my son Vince pioneered the chalupa compuesta de camarones, a crisp, flat corn tostada with refried beans, sliced avocado and diced tomato, topped with very thinly sliced cabbage that is tossed either in lime and cumin or vinegar and celery salt, and of course the shrimp, chopped up.

But chalupas are really a hot-weather dish. I was feeling cold, inside and out, looking for more of a comfort food experience. I sauteed the shrimp in just a little butter and olive oil and a lot of garlic and red and black pepper and then added a jar of clam juice that Vince laughed at me for saving when we made clam pizza. I toasted panko bread crumbs separately. 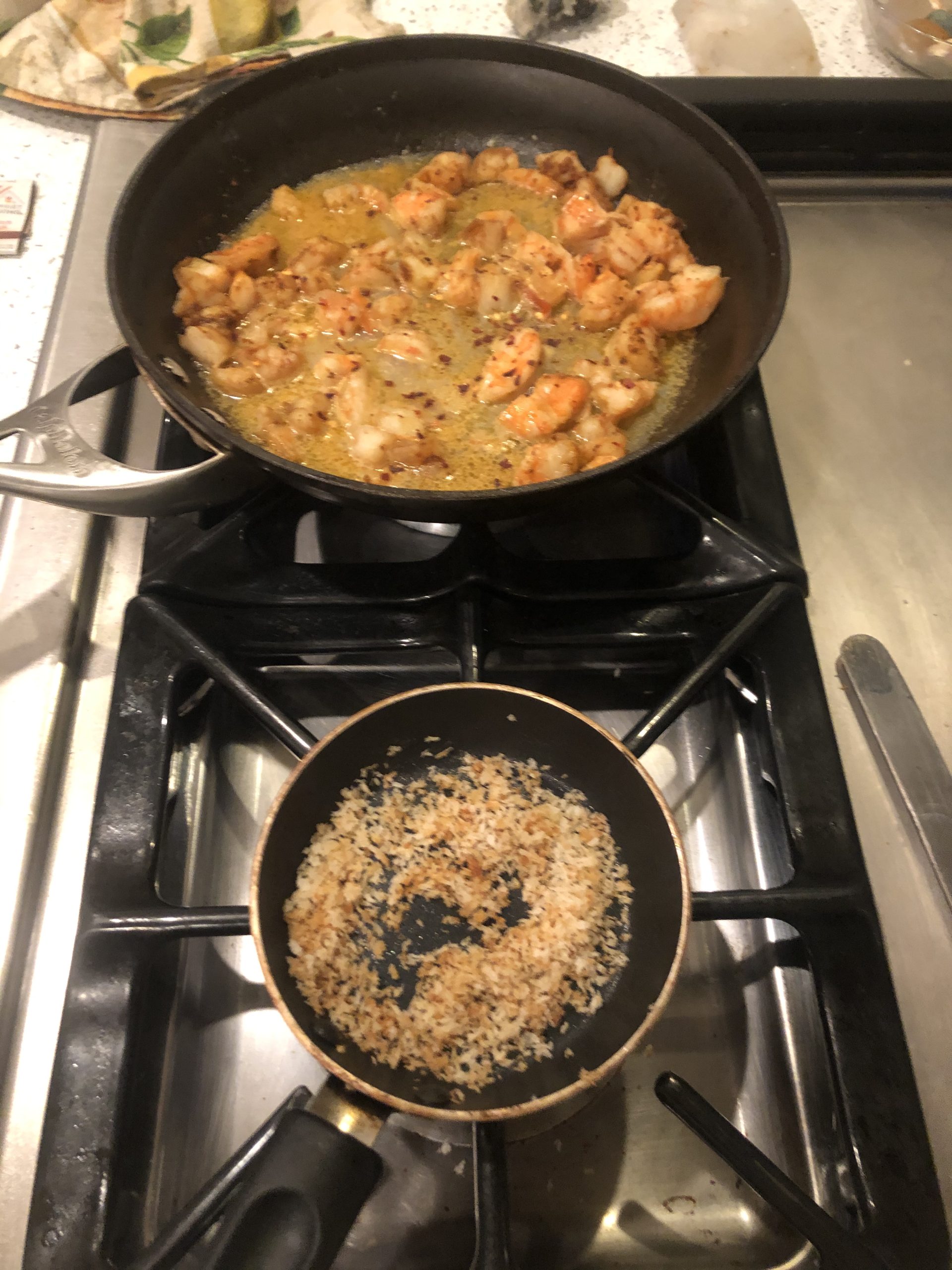 I tossed the contents of both pans with spaghetti and ate it all by myself, with the leftover greens on the side.

Since the shrimp, there’s been a corn and lima bean chowder, peanut noodles, Portuguese cabbage soup with vegetarian chorizo, Cobb salad, baguettes, breakfast tacos, broccolini, and more. More? Yes, I’m afraid so. Surely I will be a blimp in no time and clearly must get back into regular exercise, which somehow fell away in the past few months. I like the 30-minute mat Pilates from Bodyfit by Amy. “The important thing,” Amy tells us, “is that you are breathing.”

Also, little Wally, who celebrated his four-month birthday on January 10th, is catching on to the idea of prancing down the street on a leash. That helps. Thank God for Wally, even if he is still chewing everything in sight and peeing on the couch, because I think otherwise Jane going back to school this month could be the beginning of a death spiral of doubts and Beaulessness. Wally has also been the beneficiary of my kitchen mania. His breeder gave me instructions for making “puploaf” which has two kinds of ground meat, fresh vegetables, brown rice and eggs. Yes, really. I bake it every two weeks, and write his monogram on top with ketchup, WW. I’m sure ketchup is one of those things you are never supposed to give a dog, but it doesn’t seem to be bothering him.

Which brings me with sorrow to Brian Sicknick, the 42-year-old police officer who died after being hit in the head with a fire extinguisher by maniacs at the Capitol last week.  From the article in the New York Times: “He spent much of his free time trying to rescue Dachshunds, his family said in a statement.” What a godforsaken day that was, with the moron president sending his Horrible Boys to stop democracy, vandalize offices and kill dachshund lovers.

Our country has such a long way to go to recover from everything we’ve been through, and it’s not over yet. January 1st was not the magic charm and the 20th probably won’t be either. So much to worry about, a whole world to resurrect, and I am cooped up alone in this house like Jeannie in her bottle, but without the magic powers or the clueless, commitment-phobic boyfriend. The good news, Amy, is that I am breathing. 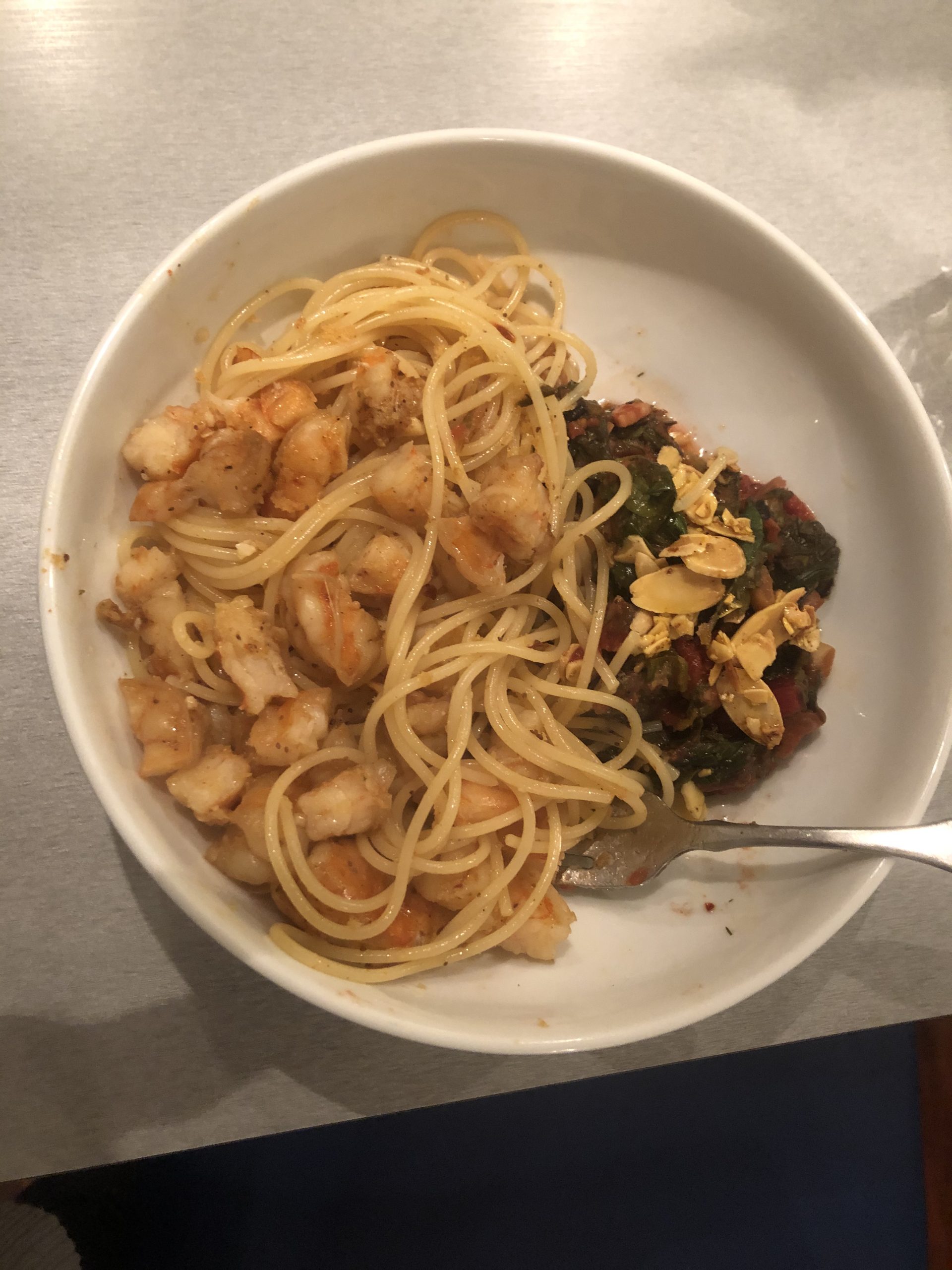