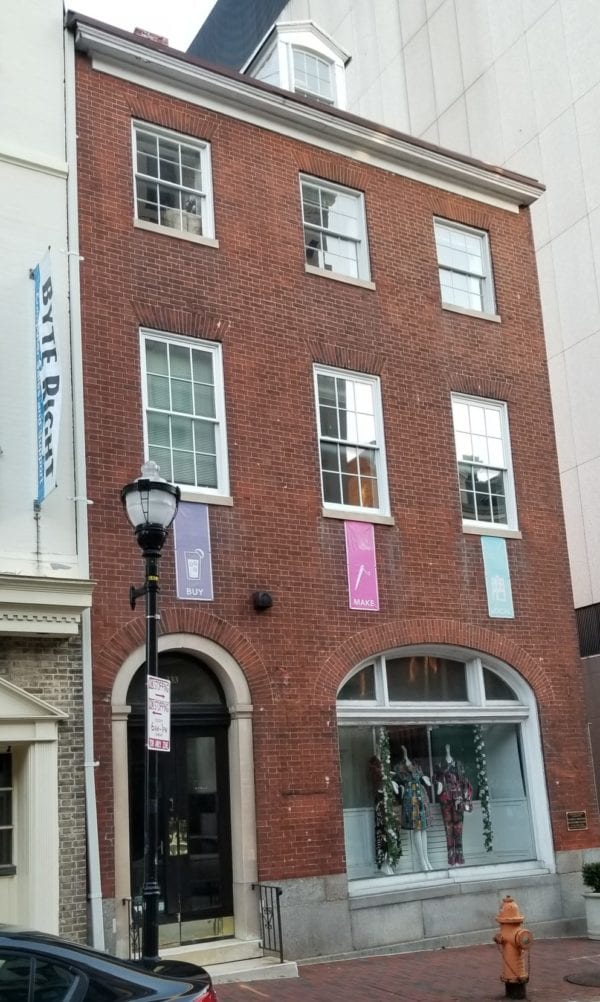 The former Women’s Industrial Exchange will become the new home of the Maryland Women’s Heritage Center, according to the heritage center and Marian House, the organization that took over ownership of the building earlier this year.

The two groups announced today that the heritage center will lease the 1,000-square-foot storefront space of the Women’s Industrial Exchange – the former gift shop in the front of the building – for its new home.

With roots going back to the 1980s, the center was created to provide a place where the general public can learn about the history and contributions of Maryland women. Its last permanent home was at the base of the 39 West Lexington apartment building, the former BG&E Corp. headquarters, from 2010 to 2017.

After 2017, it became a roving center, taking exhibits around the state. Since the pandemic in March, it has existing mostly online and has been looking for a home where it can again welcome visitors once the health crisis is over.

“MWHC is thrilled to have a new home with such a deep and rich history in the community,” said heritage center executive director Diane Bailey. “It is a natural fit for our organization to begin a new chapter at the historic building at this time.” In June, Marian House took control of the Exchange building at 333 North Charles Street from the organization that was founded in the 1880s to help women earn income at a time when jobs for women outside the home were scarce.

The building dates from 1815 and is best known for its front gift shop and back lunchroom that served tomato aspic, deviled eggs and chicken salad sandwiches.

“This is what we have had in mind since we acquired this significant property,” said Marian House executive director Katie Allston, in a statement. “Having such an important women’s organization as our first significant tenant will kick-start our plans for Marian House at the Women’s Industrial Exchange to become a women-oriented center for downtown Baltimore.”

According to Bailey, the heritage center needed a location to operate its programs and house exhibits about individuals, organizations, events, and special topics related to Maryland women.

Other complementary uses in the future, she said, may include a place to hold meetings and conferences; an interactive, state-of-the-art student learning center; a resource and reference library; and a women’s history archive.

Amenities will include displays of arts and crafts; dramatic, musical, and dance performances by or about Maryland girls and women; dialogues and seminars on women’s issues; space for special events and receptions; and a gift shop with art, literature and unique gifts by Maryland women.

Bailey said the heritage center will be signing a one-year lease, with options to renew. She said the center plans to occupy the former gift shop space starting December 4 and hopes to have a “soft opening” to the public early in 2021. “We will build up to a March Women’s History Month event or events, depending on COVID-19 restrictions,” she said.

Bailey said the former restaurant space, which is roughly on the same level as the gift shop, would be an ideal place for the heritage center to expand with meeting space, a library and other areas. She said the organization is raising funds for the new location and also could benefit from pro bono help from a local design firm.

The Women’s Industrial Exchange board asked Marian House to take over its building and assets in June 2020, after deciding to cease operations at 333 North Charles Street. The building’s upper floors contain apartments and will not change.

The heritage center is an outgrowth of the Maryland Women’s History Project, which began in the 1980s as a collaborative venture between the Maryland Commission for Women and the Maryland State Department of Education.

Bailey said the center became a separate Maryland non-profit in 2005, established to “preserve the past, understand the present, and shape the future by recognizing, respecting, and transforming the experiences and contributions of Maryland women of diverse backgrounds and from all regions of the state.” Its motto is: “Adding HERstory to history to tell OURstory.”

One of the first exhibits on Charles Street, Bailey said, is likely to be about suffrage: “Valiant Maryland Women: The Fight for the Vote.” She said the exhibit had been touring the state before the pandemic and would fit well in the new permanent space.

The center also has a Women’s Hall of Fame exhibit and an exhibit on Maryland Women in STEM (Science, Technology, Engineering and Math) Careers. Another logical exhibit, Bailey said, would be one about the history of the Women’s Industrial Exchange itself.