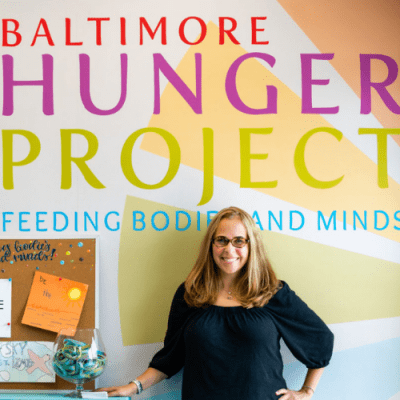 Many of you have undoubtedly heard of the Baltimore Hunger Project – a nonprofit that is dedicated to eliminating the growing problem of weekend childhood hunger. But are you familiar with their founder and executive director, Lynne B. Kahn, who is also a staple in the Baltimore Jewish community?

Read about these 13 things to know about Lynne Kahn:

Lynne grew up on Old Court Road, not far from The Park School where she attended. Her parents still live in her childhood home.

She majored in political science and religion at the University of Rochester and after graduation had every intention of joining the Foreign Service. But… “my father said, ‘come work for me for a bit’. I went back to school to get my accounting degree and have been a tax accountant ever since.”

Perhaps the new career path was a good thing…Lynne met her husband, Howard, at a CPA review class. “I introduced myself to him in class and offered to start a study group. Later that night, while I was out to dinner with my parents, I saw Howard at the same restaurant with his parents and turned to my mom and dad and said, ‘See that guy over there? He’s the man that I am going to marry one day.’ That was 27 years ago.”

Growing up, Lynne remembers watching her mom volunteer to serve food every Thursday at Our Daily Bread. Also, she recalls her mom answering phones for a hotline called WISH that helped women in crisis.

When her own children, Max and Emily, were younger, Lynne says they served food on Thanksgiving Day with Bea Gaddy in Baltimore.

Latest posts by The Associated Contributors (see all)