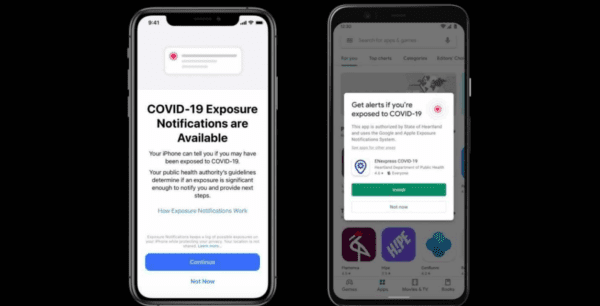 During Gov. Larry Hogan’s press conference on Maryland’s COVID-19 response on Tuesday, screenshots of an app made an appearance among the slide deck.

“To further enhance our state’s contact tracing efforts, I’m pleased to announce that in collaboration with Apple and Google, Maryland will be one of the first states in the nation to use Exposure Notifications Express, which is a state-of-the art app designed to help public officials more quickly provide notifications for residents about potential COVID-19 exposure,” Hogan said.

It means Maryland residents will soon be able to add a feature that enables alerts when they came into proximity of someone with COVID-19 on their phones. The move comes as Apple and Google are launching a new software framework that helps states deploy the functionality within iOS and Android systems. According to The Verge, this is designed so that public health authorities won’t have to launch their own apps.

In April, Apple and Google first announced a partnership to help authorities with contact tracing. After several states built their own apps, this latest move is characterized as a next step to ease adoption.

To launch the express service, states must opt-in, as Maryland is doing. Virginia, D.C. and Nevada will also be among the first areas to add the feature. These jurisdictions don’t have to build standalone apps, but must deploy two types of servers, according to Apple’s description of how the app works for developers.