I should have been home working on our kitchen reno… instead my husband suggested we go up to NYC to show a friend of his, who’d never been, around the major tourist sites. Within seconds, I had a plan in mind: Staten Island Ferry (to see the Statue of Liberty, and also, just because), lunch in Chinatown, a Christmas Market or two or four, Times Square, followed by a carriage ride in Central Park. We could do it! 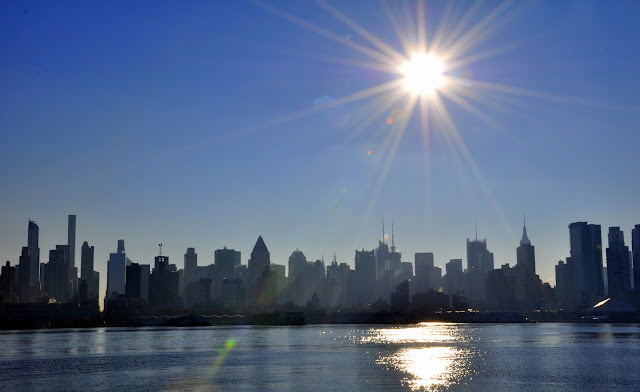 There are lots of ways to go to NYC: train, bus, car… but we choose to go in on the Weehawkin Ferry, which crosses over the Hudson River from Port Imperial in Weehawkin, NY to W. 39th Street. We’d “discovered” the Weehawkin Ferry several years before on our way up to NYC for ComiCON and found it convenient and easy. The ferry runs from 8 in the morning to 1 the next morning, and parking is reasonable. The city looked beautiful coming in! We left the Baltimore area around 5:15ish a.m. and caught the ferry over and by 9ish we were headed toward the Staten Island Ferry, the first stop on our itinerary. 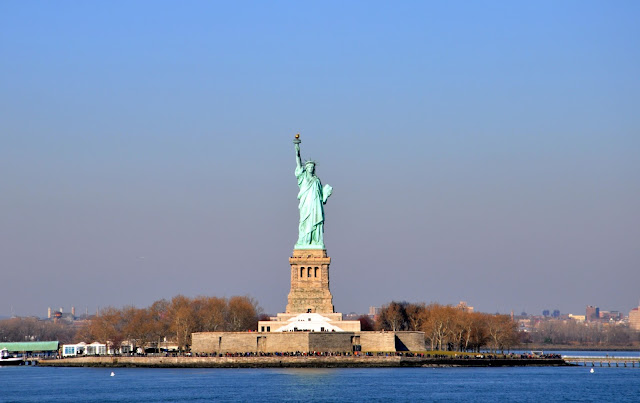 Our friend, Dave, had never seen the Statue of Liberty, nor any of the touristy sights of New York. Taking a ride on the Staten Island Ferry — a tip I’d read about somewhere years ago — provides a lovely view of the lower end of Manhattan, the Brooklyn Bridge, and, of course, Liberty Island. On the ferry, we ran into tourists from Wisconsin and Florida, who also had read in a blog the tip about the Staten Island Ferry. The best part is that it’s free for the ride! 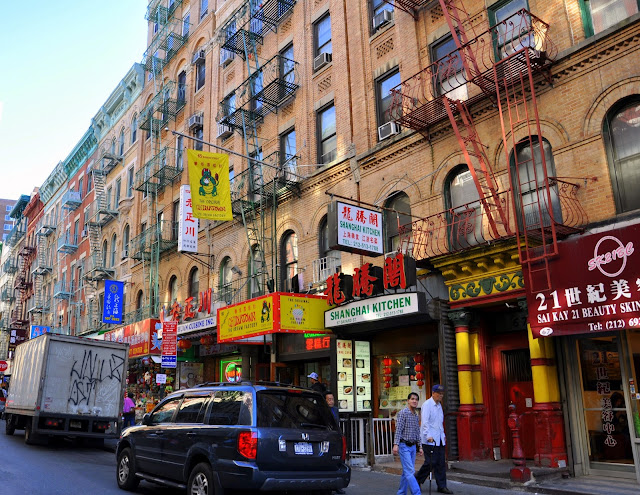 After riding the Staten Island Ferry to Staten Island and back, we walked through the Financial District and past Wall Street, making a brief stop at the Christmas market in South Street Seaport as we headed to Mott Street in Chinatown. What street compares with Mott Street? Ella Fitzgerald’s song, “Manhattan,” replayed in my head  (in fact, I’m listening to it as I’m typing this post). We were lucky — the sun was shining and the temperature was headed to the mid-50s, a perfect day to tour the city! Chinatown is about a 30 minute walk from the Staten Island Ferry. 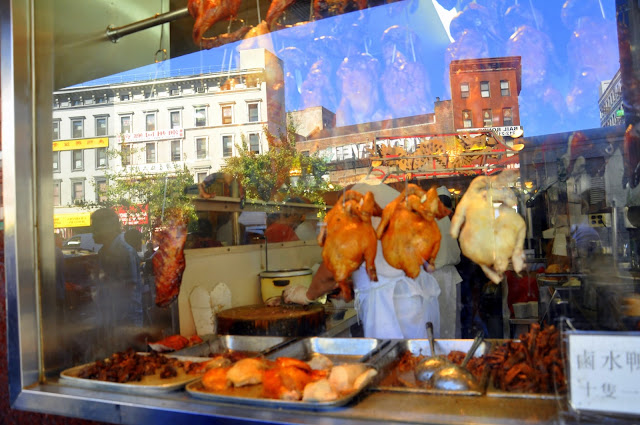 We enjoyed a quick lunch at one of the restaurants available in Chinatown, then browsed some of the shops, before grabbing a cab to Bryant Park to check out the Christmas Market there and watch the ice skaters for a little while. I found a delightful purse made out of candy wrappers, picked up a few stocking stuffers, and my husband and I picked out a pretty NYC-themed Christmas ornament to add to our tree. 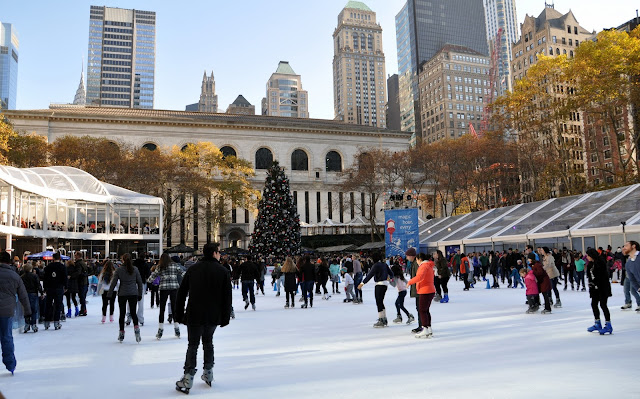 After Bryant Park, it’s a quick walk over to Times Square to see the razzle dazzle of all the lights — a must see for anyone new to NYC. From Times Square it’s a reasonable walk up to Central Park and this was for me as much as for our friend Dave: Enjoying a carriage ride around Central Park is on my bucket list.

Central Park, the urban park in middle-upper Manhattan, is the most visited urban park in the United States as well as one of the most filmed locations in the world, so it had to be on our itinerary. It opened in 1857 on 778 acres of city-owned land. The following year, Frederick Law Olmstead — who also later designed the National Zoo and whose son Frederick, junior designed Baltimore neighborhood Roland Park — and his senior partner, Calvert Vaux, won a design competition and construction began, lasting through 1873. The result is the fabulous urban park you see today — all manmade and landscaped. 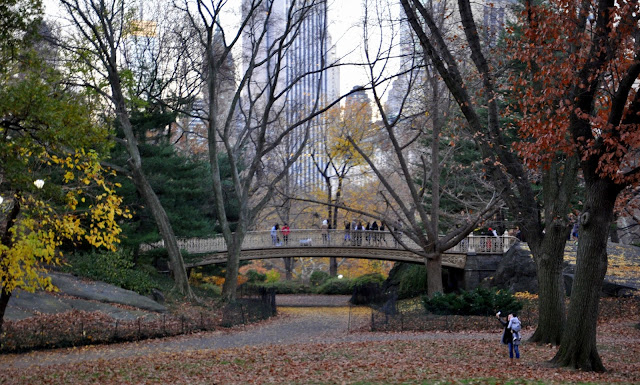 Olmsted is an interesting figure in his own right. Considered to be the father of American landscape architecture, he was also a journalist, social critic, and public administrator. His work, especially in Central Park, set a standard of excellence that continues to influence landscape architecture in the United States. His second line of achievement involves his activism in conservation, including work at Niagara Falls, the Adirondack region of upstate New York, and the National Park system. Thirdly, he played a major role in organizing and providing medical services to the Union Army in the Civil War. You knew I couldn’t NOT throw some history into this post!! 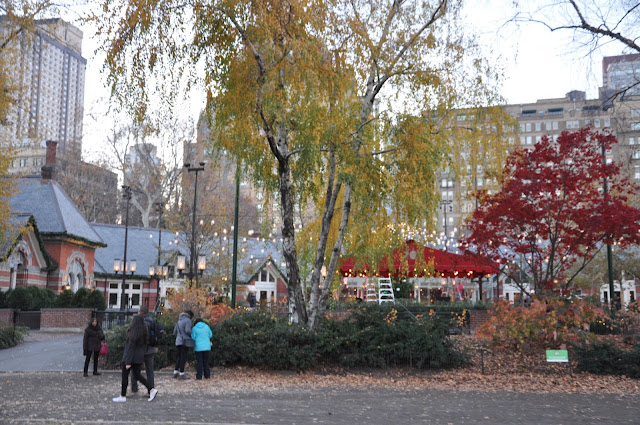 There are different tours of the park — rickshaws are popular and the tour guides will layway you about a block away from the park. This was perhaps the only unpleasant part of the day. The rickshaw drivers called out “carriage rides, rickshaw rides” but they’re really just selling the rickshaw rides. Once you start talking to them, they quickly list all the reasons why carriage rides aren’t a good option — including an inflated price. They quoted $180 but the carriage ride cost $120. Still a lot but much less than they were claiming. They also claimed that the carriage rides don’t stop — but every time I wanted a photo, our driver accommodated me. Finally, the rickshaw tour sellers also claimed that the carriage drivers don’t give any information about the sights we would see, and that too was blatantly false. I’m not saying to not take a rickshaw — all I’m suggesting is talk with the carriage drivers as well before you decide which to go with. Anyway, the unpleasant part: when we insisted that no, really, we wanted a carriage ride, they became extremely rude, uncalled for treatment of a tourist spending money in your city.

The carriage tour took us pass Cherry Hill and the Chess and Checkers House. We also passed by Balto’s statue (but didn’t stop, and my photograph of it is blurry). We sedately drove by Gapstowe Bridge and the Carousel (not in the order I’ve listed here). We gazed in awe at the apartment buildings of the rich and famous and mourned John Lennon briefly as we drove past Strawberry Fields. 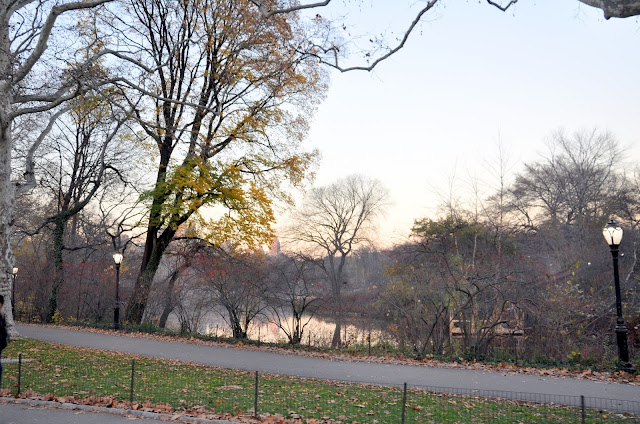 Dave commented that no matter where we looked, there were people enjoying Central Park in different ways. There were joggers and dog walkers, and kids playing soccer, and couples strolling hand in hand. We passed a couple having their wedding photos taken. There were boats rowing on the lake, and bicyclists galore. 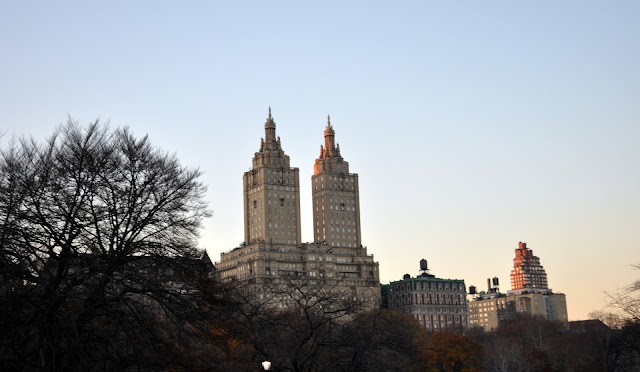 After our lovely carriage ride we got dinner, theoretically on our way back to see Times Square at night, but we got distracted when we saw the lights of Radio City Music Hall in the distance, and so we headed over to Rockefeller Plaza to see the tree, along with about 10 thousand of our best friends. It was a press! If we’d fallen, we’d either be trampled or just be held up and carried along with the crowd. The sacrifices I make for this blog! Lol. But it was pretty, and you really should see it, at least once! 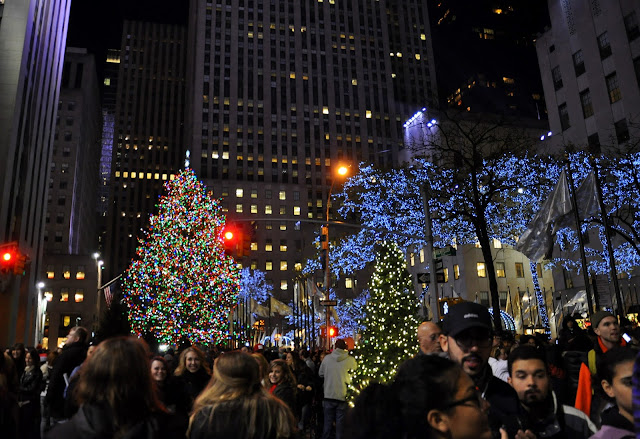 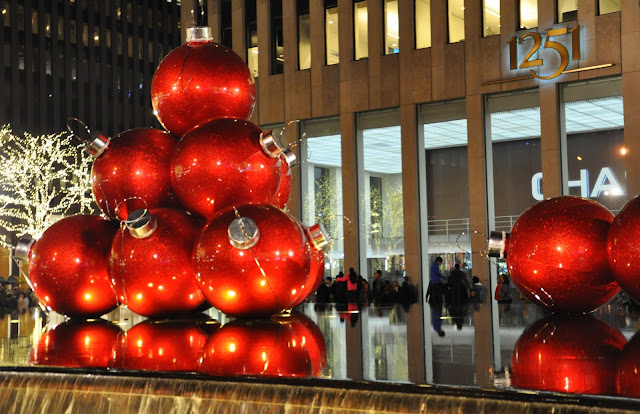 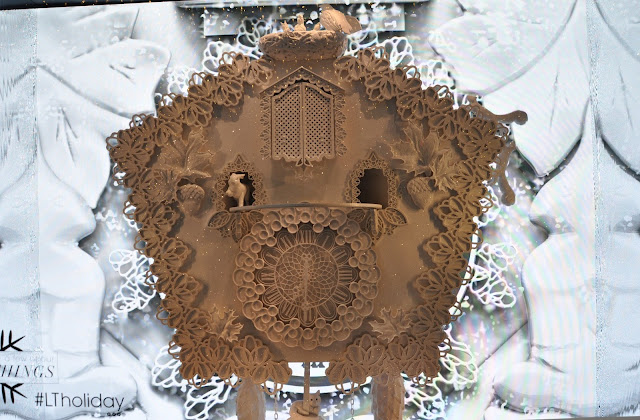 If you want to see all the windows, click here. 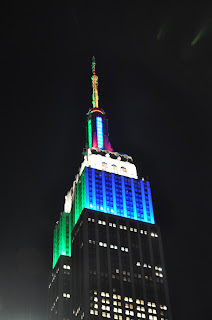 After the seeing the windows, we realized just how tired we were — we’d walked 8 miles (according to our Fitbits) and seen major NYC sights, including several of the must-see Christmas sights! We caught a cab back to W. 39th Street and Pier 79, and arrived just as our ferry back to Weehawkin was boarding. It was 8:30 p.m., and we had a bit of a drive ahead of us back down to Baltimore. It was a great day, seeing Christmas in NYC.

Tip: Having GPS on our phones came in handy, helping us navigate the city streets.

Check out the blog’s FB page for updates on places we’ve visited and blogged about: facebook.com/midatlanticdaytrips!