Mid-Atlantic Day Trips – The Western Maryland Rail Trail (WMRT) still beckoned to us, even though we hadn’t liked the east-from-Hancock section of it very much (for that stretch, recommend sticking to the C&O Canal, which is further away from the highway and a little more pleasant, but read more about that here). The blurb about the western half in the Rails to Trails book sounded interesting, mentioning the remains of an old cement factory, and some views of the Potomac.

A humid summer morning seemed like an ideal time to check out the rest of the trail; it was mostly a shaded trail and  it wasn’t supposed to get much past 85 degrees. We started where we’d turned around the last trip, planning on an easy 20-mile ride (which turned into more of a 23 mile ride, still easy). There’s a convenient park and ride just east of the Park and Dine along Main Street (MD Rt 144), the main drag leading into Hancock from I70. 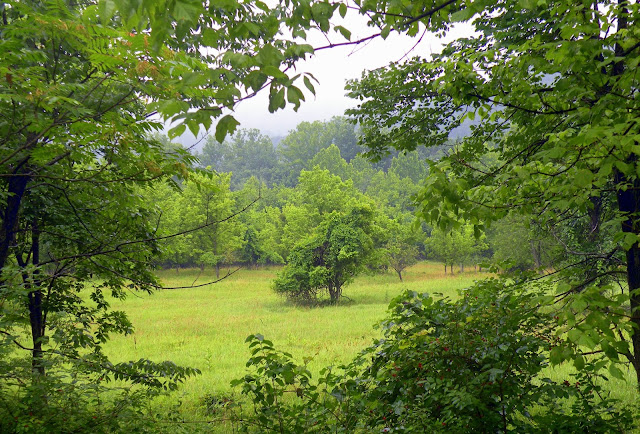 The Western Maryland Railway actually operated in Maryland, West Virginia, and Pennsylvania. It was primarily a coal-hauling and freight railroad, with a small passenger train operation. It once stretched from Baltimore through Hagerstown and Hancock to Cumberland and on into Pennsylvania. 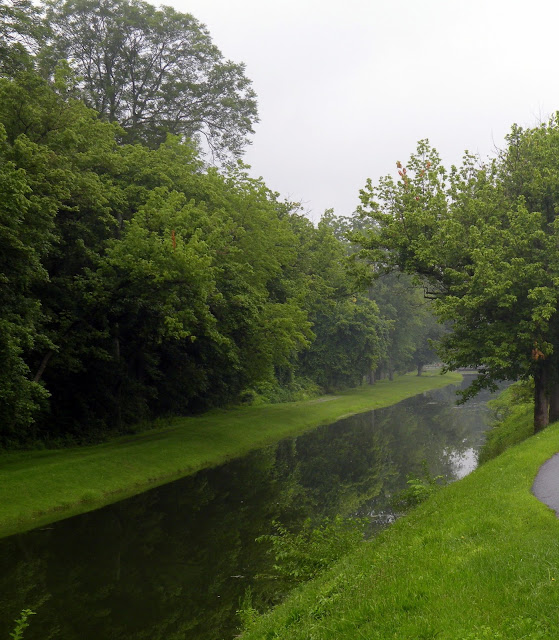 The railroad started on May 27, 1852, when the Maryland General Assembly granted a charter to the “Baltimore, Carroll & Frederick Rail Road” to build a line from Baltimore northwest through Westminister then west to Hagerstown. The name of the enterprise was soon changed to “Western Maryland Rail Road.” 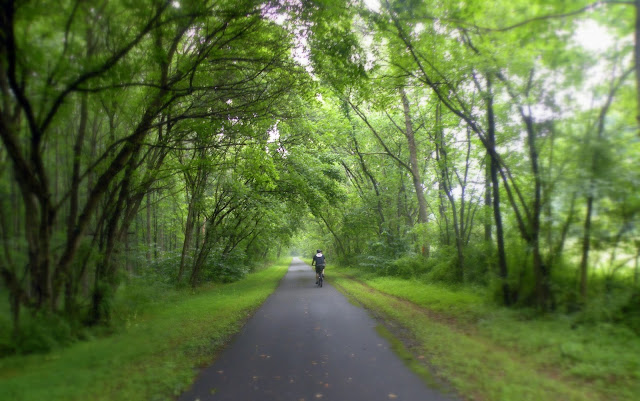 The line was opened as far as Union Bridge in November 1862, and as with many railroads in war-torn areas, the Union and Confederate armies skirmished over it, but it was in the hands of the Union Army during the Battle of Gettysburg in July 1863. Construction resumed in 1868. The line reached Hagerstown in 1872 and was extended a few miles to a connection with the Chesapeake and Ohio Canal at Williamsport in 1873. The main line eventually was extended from Williamsport and Big Pool, MD, and across the Potomac River to Cherry Run, WV. In 1881, The railroad leased a line north to Shippensburg, PA. 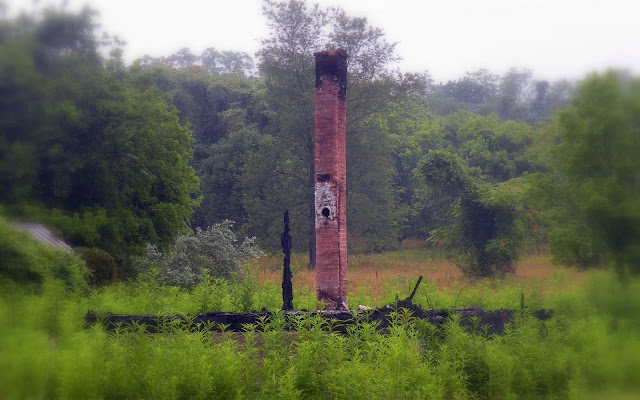 Most of the original railroad west of Big Pool has been abandoned, including the 2,375-foot summit of the Allegheny Mountains and the Eastern Continental Divide near Deal, PA. In addition to CSX, portions of the former WM are now operated by Durbin & Greenbrier Valley Railroad, the Maryland Midland Railway, Western Maryland Scenic Railroad, and York Railway. Other portions are now rail trails, such as the Western Maryland Rail Trail. 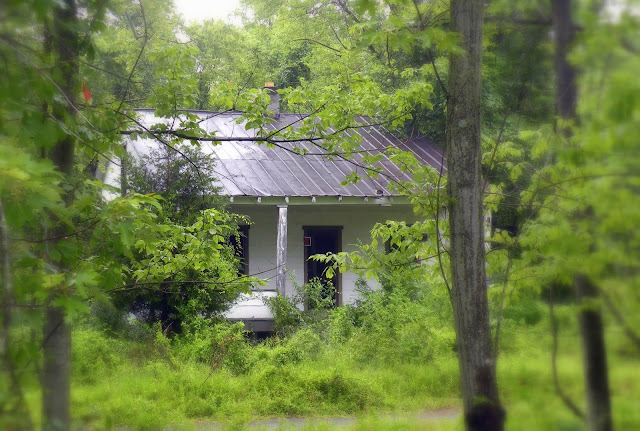 The WMRT is paved, which makes it an easy ride. Although not flat, the elevation gain is not significant. Anyone can do this ride. The WMRT is 23 miles long; ambitious and fit riders can do the entire length and back fairly easily, I imagine. but 46 miles is too long for us. From the park and ride in Hancock, we figured we’d go about 10 miles, then turn back and have lunch at one of Hancock’s restaurants (there are several right along the WMRT). Heading west out of Hancock, you’re facing a slight elevation gain — slight enough that my husband and I argued about whether we were really going up. He was having a hard ride, but I suspect his brake was sticking again, making him pedal harder than he should have. He also was riding a mountain bike whereas I was cruising fairly easily on my neat little Trek hybrid. 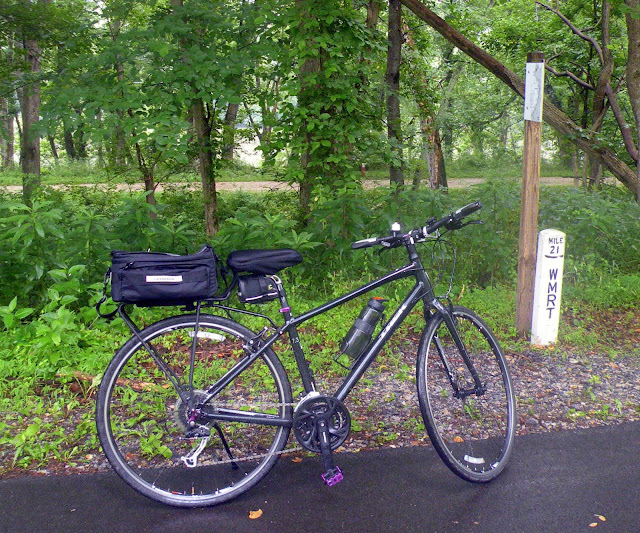 Going west from Hancock is a more interesting ride than the eastern half by far! We passed ruins of farmhouses, the chimney of an old cement factory (not the chimney shown in the photo, though), and remnants of the railroad’s heyday (see below). 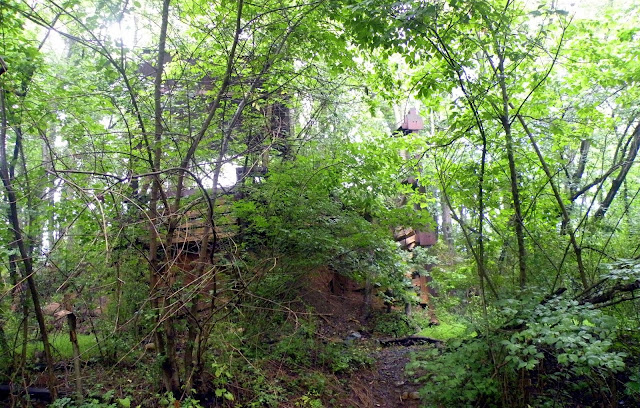 Last time we rode the WMRT, we ate at the Park and Dine in Hancock, a pleasant little diner, but still a bit of a greasy spoon. This time we chose Buddylou’s Eats, Drinks and Antiques, where we enjoyed tasty sandwiches and cold rootbeer; after lunch we browsed through the antiques. What is so fun about Buddylous is the decor — old flannel plaid shirt sleeves created unique and upcycled window treatments, echoing the flannel plaid seat cushions. What a clever idea!! 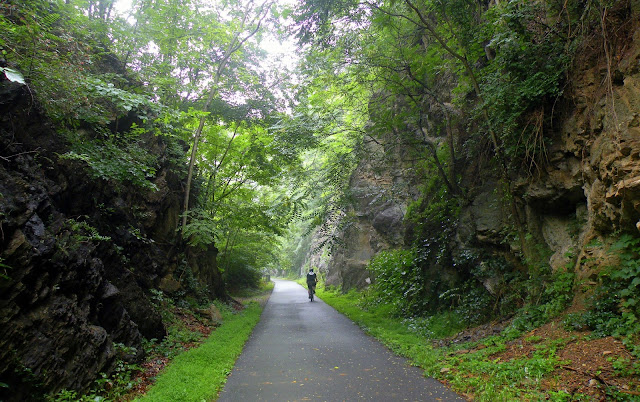 If you want to vary your scenery, then consider riding one way on the WMRT, and then cross over to the C&O Canal towpath for the ride back. We stayed on the WMRT both ways, but we noted that at about 10 miles west of Hancock there’s a bridge over the canal to the towpath, and just below Buddylou’s, there’s a truss bridge over the canal, so it would be quite easy to do. 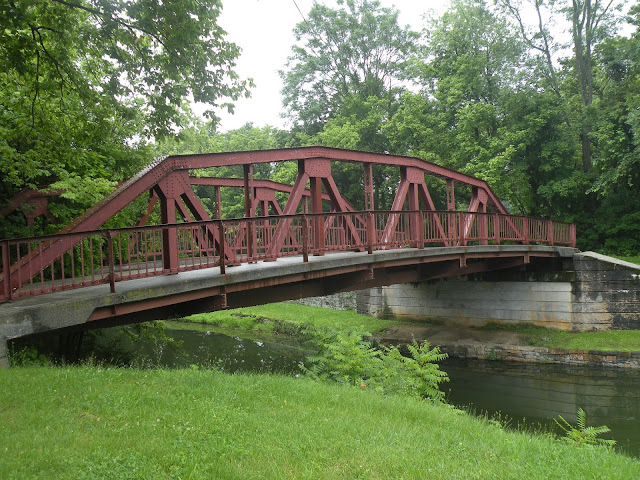 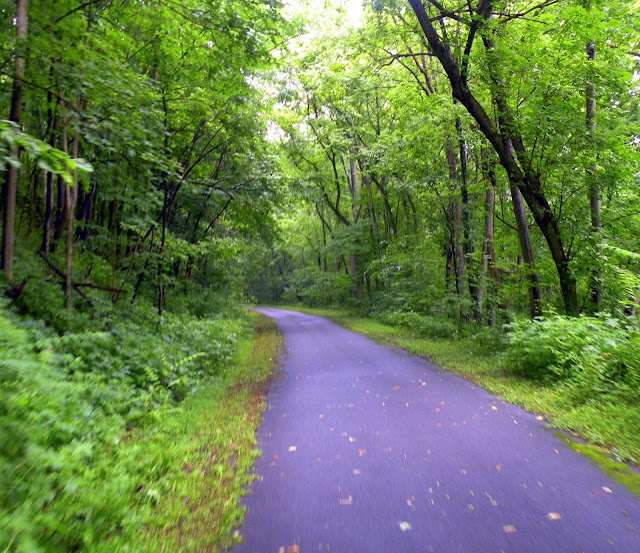