Look who showed up in Boston last month! My grandson. Believe it or not, his other abuelita, Maria Rosa, beat me to writing the first poem about him, in Spanish. Already he is an internationally celebrated child.

Like the poem I wrote for Jane on her birthday last June, this is a glose (also called glosa and gloss.) A glose opens with four lines from another poet, followed by four ten-line stanzas, each of which ends with one of those lines. Within the stanzas, lines 6 and 9 rhyme with the 10th.

It is followed by a little Q&A with Baltimore Fishbowl publisher, Suzy Dunn, whose delighted grandmothering is an inspiration.

Wally the pup watches wide-eyed as I dump out drawers
and dig through databases: where is my 31-year-old poem
about a blue-eyed babe? Your Uncle Vince, Little Guru
and Toothless Majesty of yesteryear, must pass on his titles.
A million memories unburied when I looked in your eyes.
Two weeks and one day since they prised you, bawling,
from your mother, so tightly wedged your ears are
uncurling still. Your bleary parents lie collapsed, one eye
shut, one on the Snoo — is that squalling or calling?
your infant voice rising and falling

sparks muscle memory. How to double the diaper, fold
the blanket, tuck the edge. The pinky on the palate
to pacify, the right way to lift, to pace, to pat — more firmly
than you think. I am good at this, babies like me. But so far
being a grandmother is learning to tiptoe. Safety first, Nana,
the old ways could be wrong. My own mother took a dim
view of breastfeeding, which she nonetheless learned to view.
I am well trusted in the kitchen, at least, and infuse the soup
with qi and chi and every earthly nurture to the brim.
Humming the same few notes—some hymn

your father remembers from his own cradle, with thanks
to James Taylor. Born like a blessing in a year of plague, you are
protected by the shades of your grandfathers. On the left,
a fine gentleman of Guayaquil, Ecuador; on the right, a skating
sprite of Philadelphia. Your parents, raven-haired princess
and Texan prince, once lovesick students, once bride and groom,
they danced all night to Spanish love songs beneath
the Central Park moon. Que este amor es tan profundo… y que
lo sepa todo el mundo… When you’re bilingual at two we’ll assume
you must have learned while in the womb.

The grandmothers huddle over their phones. Send pictures,
they say, send news. They warned me the world would stop
when I looked in your eyes. They said I would only want
to push your pram and wipe your tush. If there are new ways
do these things, they advised me, agree. And I do agree.
To hand sanitizer, temperance, electronic bassinet, what more?
Today, I’m told, you are making a fine mess in Boston
spewing from both ends faster than your parents can wipe.
Dear slimy, noisy baby! Part treasure, part vortex, part chore
carried here from where you were before. 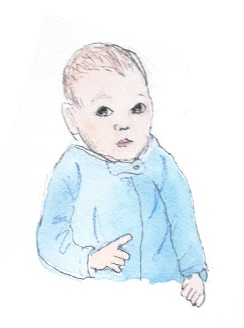 Does it feel like it’s all coming back to you?
That’s where this poem began, actually. Everyone was talking about whether the baby looks like this person or that person, and I had the same thought I had with my own children — he looks a little alien. That made me think of a poem I wrote for Vince way back when, “Little Guru from Outer Space,” but I couldn’t find it and could only remember a little bit. (You were dreaming of another place, where magic babies rule the human race, your chubby majesty, your toothless grace, little guru from outer space…) I seemed to recall it was published in Mothering magazine so I thought I’d find it with Lexis Nexis but no! Finally I realized the thing to do was to write a new poem. As far as other things coming back, there’s the muscle memory I talk about in the poem — diapering, burping, rocking. But I have only spent four days with him so far, so I bet many things are still on the way.

One of the most rewarding aspects of grandparenting is seeing your child as a parent. Did you get some glimpses of that in Hayes?
It’s heartbreakingly sweet. Especially since his own late father was so incredible with his babies, and he looks so much like him. Hayes is great with the son. They both are. It’s a magical transformation.

What emotion are you surprised to discover in becoming a grandparent?
Maybe overwhelming tenderness shouldn’t be surprising, but it still hits like a wave. Also, as I wrote in the poem, a somewhat uncharacteristic urge toward agreeability and second-bananaism. (Or third or fourth, as it were.)

What’s your grandma name?
I think I’ll be Nana, like my mother was, but if he calls me some funny made-up thing, like Jane calling me Mozzie, that would be fine, too. His other grandma is Abu, for abuelita. My friend Sue Jernigan, whose grandson was also born in Boston just a week before mine, says she is going to be Chi-chi or Honey!

Can you tell us a little more about the glose?
I love this form; it is like doing a puzzle, first finding the poem you want to gloss, then getting the repetitions to work and putting in the rhymes. Its roomy length pushes you to explore the topic and allows for a conversational tone, while still creating the word-by-word, beat-by-beat, line-by-line focus that is the heart of lyric composition, whether formal verse or free. It is what I have always enjoyed most about writing. I really think everyone, or at least any writer, should try doing one. Anyway, now that I have three I am thinking illustrated book of gloses. 2030. Sounds like a bestseller, right?

This glose is based on Penny Harter’s poem “In the Dark,” so the first four lines are hers. I found Penny on the internet and wrote to get her permission, which she generously gave. Yes, there are a few tiny cheats, like changing from third person to second, and adding “humming” to the  quote line in the second stanza, though the word actually does occur in another part of the poem.