Oh, how I miss my old friend Beau, who came to us with a bell on his collar one Christmas early in the century, but anyone who has a puppy will know the difficulty of finding time to be sad, which was surely the point of the puppy.

Equally difficult when you have a puppy is finding time to reflect on having a puppy, on puppy love and puppy-dog eyes, sweet puppy breath, puppy kisses and the razor-sharp teeth behind them. Instead your time is devoted to shouting “No bite!” and “Outside!” and “Pee-pee!”

I have nonetheless already written his first theme song: His name is Wally, he’s not a collie, not a pit bull, or a pug. He’s not a Shih Tzu, or a schnauzer, not a boxer or a bug. He’s a dachshund, not an oxen, he’s a puppy, and he’s my boy.

Another point of the puppy was the assertion of agency — I could make something happen in my life, rather than just be the recipient of things happening, bent over, shielding my head, so the little shards of dreck don’t hit my face. 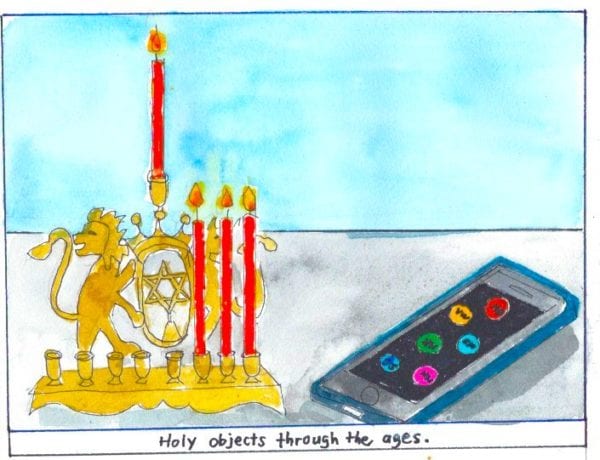 We have been FaceTiming the menorah this year — one son sang the blessing under his breath in the Boston Whole Foods, the other in his car in Texas. Daughter and her newish boyfriend attended live the second night. He had borscht for the first time and latkes only for the second time since a holiday celebration in preschool.

My daughter-in-law from Ecuador has been in our lives for many years but only saw her first Hanukah candle-lighting last week. Like my going to a Zoom memorial service for a friend’s brother in Austin, with people I haven’t seen in decades — a pandemic silver lining.

Baruch atah adonai elohenu melech holom, asher kidishanu bmitzvotov, vitzivanu l’hadlik ner, shel Hanukah. The Hanukah blessing is the single bit of Judaism I instilled in my children, and I’m always a little surprised to hear it come out of their mouths. It’s interesting how comforting a meaningless but centuries-old ritual can be.

As my philosopher ex-husband once told me, possibly via Pascal, faith does not require belief.

I drove to Ohio to get the puppy, sure, why not. A pilgrimage seemed just the thing. My daughter and I, Friday night, open road, Impossible burgers at Burger King. There were Burger Kings at every exit and then, when we decided to stop, no Burger Kings at all. Finally the GPS said there was one out there somewhere, though it would add 13 minutes to the route, and then there was not a Burger King, just a deserted church parking lot, but there was another one, somewhere, and by this time we were determined and finally the impossible became possible and we ate it in the car. My daughter drove patiently the hour-plus this added on our way to an overnight stop in Pittsburgh. A little patience and bonhomie from that girl is a nice surprise, as we have pretty much found the end of our pandemic rope.

I was driving the next morning when we arrived at the breeder’s driveway, down a pretty country road not far from Lake Erie. When I pulled into the driveway, there was a giant F-650 pickup already there, getting ready to leave after picking up their pup. So I had to back out to let them go, and didn’t think I should pull out onto the two-lane road, and had seen there was a drainage ditch down the middle of the grassy frontage, and in my desperation to avoid it drove right into it. Left front wheel hanging, right in mud, both spinning fruitlessly when I tried to reverse. Back of my car still blocking driveway so truck could not pull out. Daughter’s goodwill immediately exhausted.

First step: go report what happened. Window of truck so high can barely see the young boy and grizzled daddy inside. You might be stuck until AAA comes, I tell them, if they even have AAA out here. Oh shoot, says grizzled daddy, let me take a look.

Front-wheel drive, right? Sheesh. He still thinks I can probably back out of there. I say, can you do it for me? I don’t think I could even fit in that little car, he says, but he can talk me through it. Straighten the wheel, more, more, ease onto the gas, okay, okay, a little more gas — wow, it’s catching! and yay! back on solid ground. 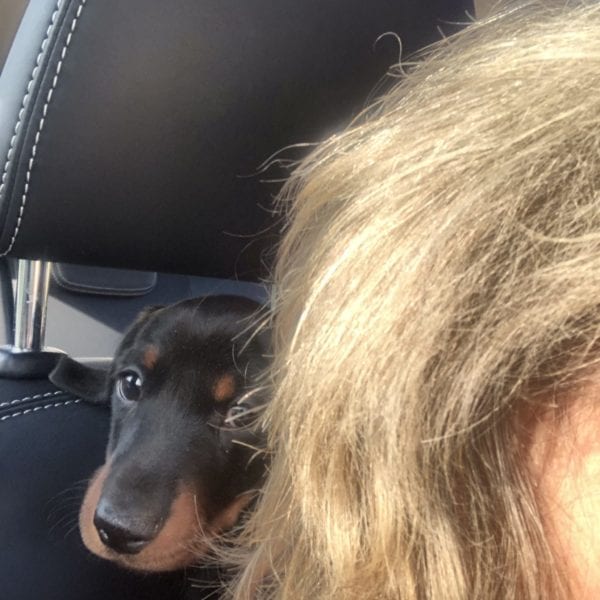 Trouble avoided, major blemish on story of puppy’s arrival turns into magical save. Grizzled savior departs, adorable puppy received, along with recipe for pup loaf, fluffy blanket, and chewable cow hoof. Daughter drives all the way back to Baltimore before dark as puppy crawls up and drapes himself around my neck like a stole.

I can’t help looking for omens, though who believes in omens? Another case of faith does not require belief. So I will start the story of the puppy here, with bad luck avoided, good luck found. Daughter suggests we call him Locho. I had been thinking of Wallace, among other things, but how about Wallace de Locho de Poochy de Pocho?

I am no different than some ancient tribesperson staring at the sky to find out what will happen next. It’s interesting how much we humans have altered our environment without our insides changing a bit. The stories keep us going, the narrative tension keeps us awake, the omens rain down from the heavens and glitter on the ground as the hero emerges from a monster truck to set us back on the path.

Recently I was remembering 2012, when I did the Hep C treatment and was laid out for months and most of my body hair fell out and didn’t grow back. I decided you could probably write a poem called All Years Are Bad Years. But better yet, All Years Are Good Years. And why not. A little more challenging, sure, but also more helpful and perhaps just as true. All years aren’t all anything. Why not expect good things? 2021, make us proud.

P.S. I don’t know how long it’s going to take to housebreak the puppy, but at least he came knowing how to sleep. He sleeps through the night like a champ, even when I wake up at 2 or 3 to perform the ritual fretting. And the cat has done so much better than I thought she would. At first she was horrified, and she still won’t play Chase, but she is willing to take up her traditional spot during our long days on the couch. Another good sign.