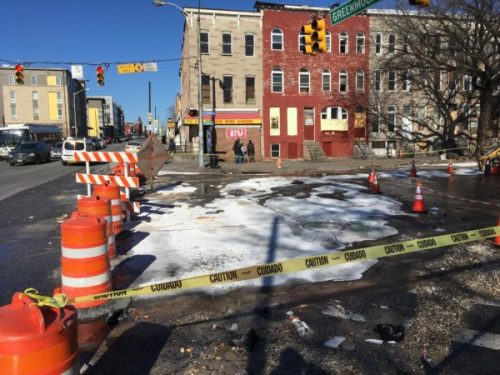 The seemingly endless cold spell afflicting Baltimore has put vulnerable residents at increased risk of catching hypothermia and disrupted water service throughout the city and in Baltimore County.

Baltimore hasn’t seen a day with a high over 40 degrees since Christmas, and won’t be seeing one until at least next Monday, according to Weather Underground. The cold spell has pushed Baltimore City Health Commissioner Dr. Leana Wen to extend a Code Blue alert – an action that pushes city agencies, shelters and partners to take extra precautions for the homeless and other vulnerable residents – through Jan. 8.

Specifically, the Mayor’s Office of Human Services works with shelters during Code Blue periods to extend hours and provide more beds to keep homeless people out of the cold.

One person has died in Baltimore so far this winter from hypothermia, according to a health department release. Eleven in total died from hypothermia last winter, officials said.

“Through this prolonged cold weather spell, it is important that all Baltimoreans take precaution,” Wen said in a statement. “Hypothermia, or low body temperature, can be just as dangerous as extreme heat.”

Intersections around the city have frozen over as pipes have busted and the resulting leaks have turned to ice. Baltimore City Department of Public Works spokesman Jeff Raymond wrote in an email that “around three dozen” water main breaks needed to be addressed as of Tuesday afternoon. Five crews were working overtime over New Year’s Eve weekend, including contractors.

Additional contractors will be assigned, and crews have received word that they’ll be working mandatory 12-hour shifts “to handle the crush of breaks beginning this Friday,” Raymond said.

At North and Greenmount avenues, four lanes were blocked off around 1 p.m. Tuesday as crews performed repairs on the frozen-over intersection. Further south in Fells Point, TV stations have reported some residents are even unable to get into their cars that froze over due to spewing water that turned to ice.

Raymond said the total number of residential service outages is “constantly moving” as crews make repairs and restore service. One resident in Upper Fells Point wrote on Reddit that their house has been without running water since Monday morning.

Raymond said Baltimore dwellers are advised “to keep bottled water handy as this deep cold is unlikely to yield over the next several days.”