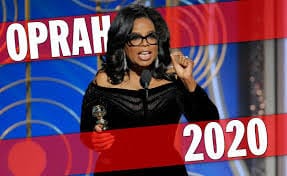 Toward the end of last year, I was down in Virginia visiting my 92-year-old ex-mother-in-law Joyce, and Jane, her sister-in-law, a former ambassador. Joyce reads the Washington Post from cover to cover every day, while Jane reads the New York Times with equal thoroughness, though she eschews the Thursday Style section. I asked these avid and perspicacious followers of politics to give me their takes on the Democratic presidential candidate options.

In short order, they deemed every one of them a loser, including Elizabeth Warren. She might be a good president, Joyce commented, but she could never win the election.

“Who could?” said Jane, shaking her head.

Though I knew that they were unlikely to go for it, I offered what I think might be the best choice among the names that have come up so far —Ms. Oprah Winfrey.

She has no qualifications. Exactly what people want. No prior involvement in politics, no swim in the swamp. She is someone people feel they feel they know, someone they have spent hours and hours with in their living rooms. She’s not white, or a man, which makes it tougher, but she is the goddess of all media and a self-made billionaire. She projects authority — authority with a spiritual glow. She has the clothes for it. And we already know America worships her.

I have personal insight into how much people love this woman, because no matter where I go or what I do, there is only one thing on my resume that reliably impresses people of all ages and persuasions — the fact that I once appeared on Oprah. Unfortunately, it was a miserable experience, and ever since 1996 I have been saying mean things about her whenever she comes up.

(Well, I was told it was going to be a show about my book, First Comes Love. Instead it was a show about women who discover their husbands are gay, and I was just one of many examples. Oprah had not read my book, got my name wrong, and asked only humiliating questions her producers had given her, like “Did your husband have to be really drunk to make love to you?” Fortunately, there was one thing that she was enthusiastic about and wanted to discuss. It was my blouse. Full story here.)

To my surprise, the Virginia ladies did not immediately pooh-pooh the suggestion. “Maybe,” said Jane. “She’d have to have someone more experienced for vice president. A white man, I’d imagine. Beto? Biden? Or maybe the man should run for president and Oprah for vice?”

I googled to see whether this was true, and found a.) a November 2018 poll showing that if Oprah ran against Trump she would win, and b.) an interview with People magazine from February in which Oprah said “God, if you think I’m supposed to run, you gotta tell me, and it has to be so clear that not even I can miss it.”

Look, Oprah. God has reached down and added to your base both intellectual senior citizens who despise pop culture and disgruntled self-promoters who have been mistreated on your show. This is the sign! I’m just hoping He has also arranged for you to read the Baltimore Fishbowl.

With the way things are going, Trump may be impeached or resign, or for some other reason not run for a second term. Even if that happens, he will leave the country internally shattered, internationally disgraced, and racing towards doom. But just as Trump was the ultimate anti-Obama, both in spirit and in the sense of taking apart everything he accomplished, Oprah is the ultimate anti-Trump. She may not know much about legislative strategy and world affairs, and I don’t think Dr. Phil does either, but I think we can count on her to get some new experts. Oprah Winfrey would never put 800,000 people out of work for no good reason.

Maybe she will be more of a queen than a president or vice president. A mediagenic figurehead who can stand at the prow of our listing ship and turn back the tide of cruelty, racism, sexism, nationalism, economic stupidity and environmental destruction, while letting people who know what they’re doing run the government.

Oprah! Please! Forget me and my petty grievances, unfortunately posted all over the internet. I’ll make it all up to you at the phone bank.