During Diana Vreeland’s fifty year reign as the “Empress of Fashion,” she launched Twiggy, advised Jackie Onassis, and established countless trends that have withstood the test of time. She was the fashion editor of Harper’s Bazaar where she worked for twenty-five years before becoming editor-in-chief of Vogue, followed by a remarkable stint at the Metropolitan Museum of Art’s Costume Institute, where she helped popularize its historical collections. “Diana Vreeland, The Eye Has to Travel” is an intimate portrait and a vibrant celebration of one of the most influential women of the twentieth century, an enduring icon who has had a strong influence on the course of fashion, beauty, publishing and culture. It opens tonight at The Charles. Pigtown Design blogger Meg Fielding has seen the film and wrote about it on her blog earlier this week.

I was so delighted to be able to see the new film on Diana Vreeland, “The Eye Has to Travel”. I really loved the movie. But then I was pretty sure that I would. I have a few of her books, and they’re such fun to read. The movie opens with George Plimpton interviewing her in preparation for her writing and him editing the book, DV. 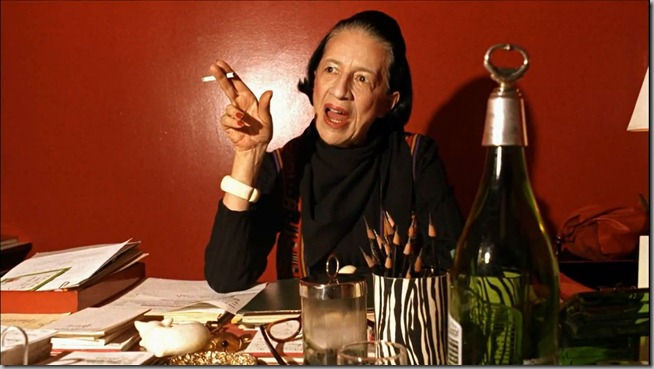 And then it goes on to talk about her innovations in publishing Harper’s Bazaar and Vogue. She talks about her editorial career, as do others including Oscar de la Renta, Anna Sui, Carolina Herrara and others, each giving their personal remembrances of life with Diana. Her two sons are also extensively interviewed which brought a very personal aspect to her life. However, as personal as her sons got, her husband, Reed was pretty much glossed over, even though they were married for 46 years. 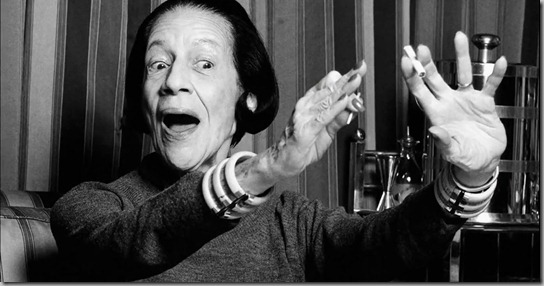 One thing that was such fun to see was how classic DV looked, more than 20 years after her death. There were interviews with Jane Pauley and Diane Sawyer, and both of them looked totally dated, while DV looked perfectly contemporary. The showing of this film was part of a Sunday morning cinema series, but if it comes your way, I suggest you see it.