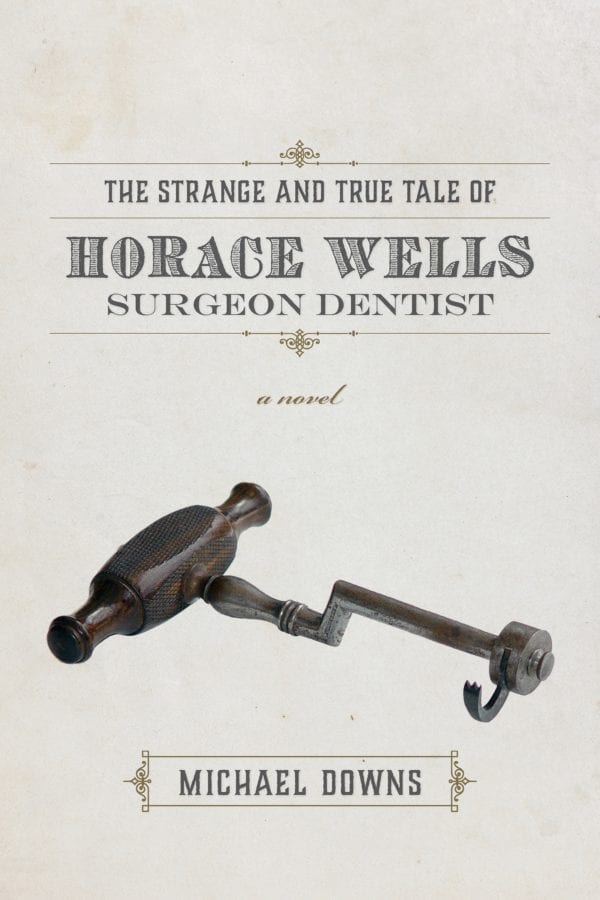 Before there was virtual reality, there was historical fiction. As lovers of this genre know, its best representatives offer an experience akin to time travel, making the cultural ambiance and physical details of another era almost magically vivid and immersive. One certainly feels this with the work of Michael Downs. He is a native of Hartford, Connecticut, born in 1964, but in each of his works set in that city, he leaves the convincing impression that he might have lived there in other periods, other lives.

His preceding book, The Greatest Show (2012) is a collection of linked stories centered around a circus fire that occurred in Hartford in 1944, killing 168 spectators at a Ringling Bros. and Bailey matinee, following the aftershocks of the tragedy into the decades ahead. In addition to his uncanny ability to evoke a physical setting using appeals to all our senses, Downs also has a way of showing the understandable and relatable souls of characters who from the outside are anything but Everyman or Everywoman.

The Strange and True Story of Horace Wells, Surgeon Dentist is based on a historical figure, the19th-century dentist who first explored the use of nitrous oxide gas in dental procedures. Various obstacles prevented him from achieving the recognition that he felt was his due, and before his death at 33 under very unhappy circumstances, he became a traveling salesman of a contraption for bathing, a would-be dealer of European art, and a drug addict. His very loving marriage to an excellent woman named Elizabeth suffered various slings and arrows as well. When she almost died giving birth to their son Charley, he swore that if she lived they would not try to have another child. But for her, life would never be complete without a daughter.

We caught up with Downs, a professor at Towson University, to ask a few questions.

The book opens with a nightmarish scene in which Horace, as a young boy, suffocates his mortally ill father to end his suffering. Was there any basis for this in your research? So much of what happens to Wells seems to be based on the historical record. How and when do you decide to add fictional elements?

Sometimes, I imagine Horace’s ghost visiting me–or I die, and he’s there in whatever afterlife, and he scowls and says, ‘”Why did you write me that way?” And the scene I think he’s most upset about is the one you mention. Because there’s nothing in the historical record that suggests that Horace as a boy mercy-killed his father.

That scene, though, did come out of principles I set for myself regarding imagination and the historical record. First, I decided I wouldn’t countermand any part of the known historical record. If Horace had one kid, I wasn’t going to give him two. I believed–I still believe–that there are enough gaps in our knowledge of Horace’s life to leave room for imagination to fill those gaps in what I hope is a compassionate and empathetic way.

Here are the facts:

• Throughout adulthood, Horace was obsessed with destroying pain.

• His father died when Horace was 14.

• When Horace was a boy it was customary, especially in rural areas, that someone sat at all times with a dying family member, including overnight. Usually, it fell to the oldest son to take the overnight shift.

• Horace was the oldest son.

So I began to imagine Horace sitting overnight with his dying father, alone with his father’s pain. The rest felt – in its way – possible and compassionate. And it served to explain Horace’s obsession with pain.

At its heart, this book is about pain, particularly physical suffering, both the enduring of it and the inflicting of it. What has gotten you so interested in that?

During the years I worked on the book, my mother endured chronic pain–from a variety of sources. I lived far away, a couple of days’ drive at best. But I could see how pain affected her and my family who lived closest: my father, my brother, my sister. Those three bore the brunt of it. To suffer as my mother did changes a person, but it also changes their families. Being part of my mother’s suffering, sometimes from a distance, sometimes up close, informed what I wrote about Horace and his family and about pain.

How does the 19th century understanding of suffering differ from ours?

I asked a historian once, a dental historian, why people subjected themselves to tooth surgery before Horace’s discovery and before general anesthesia. He said that they made a bargain with pain – accepting the intensity of a single extreme moment because it would end an ongoing suffering.

But Americans in the early 19th century also understood pain to be part of daily life. Every day involved some ache or burn or throbbing. It was the human condition. These days, though pain is still part of the human condition, we seem–or want– to see it as an aberration, a temporary state that ought to be fixed with a pill or surgery. We think we have a right to a pain-free life. Maybe we do. But a 19th-century person wouldn’t have understood that stance.

To me, your depiction of everyday life, the basics of how people ate, drank, cleaned themselves, communicated, and got around, including traveling by ship or by horse and buggy, are as compelling as the dramatic narrative of the book. How did you get so comfortable in the 19th century? Do you have to research details continually? What’s the process?

Never ending. For this novel, the research lasted until I hit the send button and mailed it to the publisher. One day, for example, I needed a pistol, and I spent a few hours on eBay looking at early 19th-century pistols for auction, then Googling those for more details.

I read books written when Horace was alive. I read historians’ books about 19th-century life. I studied paintings painted during those years. I visited a historical society in Connecticut and held Horace’s death mask. When I needed a tooth filled, I asked my dentist to give me nitrous oxide. I spent a day at a tourist site in Massachusetts that recreates an early 19th-century village. When Elizabeth buys comfits late in the novel, it’s because I bought comfits at that tourist village.

A favorite thing as I wrote the novel was to use the Oxford English Dictionary to see when words came into the language, because I strived not to use any word that didn’t exist in Horace’s time. So you’ll find nothing “snazzy” in the novel, nothing about “dental plaque,” because those came into use later.

At one point, Wells visits a utopian community, a rural commune of Liberites who have shucked off convention and responsibility to live on the land. Was this based on a real group?

Not on a particular group, though there were many such around New England and the Northeast at the time. This was all part of what’s known historically as the Second Great Awakening. Ralph Waldo Emerson and Nathaniel Hawthorne, among others, joined these intentional communities that sought to create something close to heaven on earth. But utopian thinkers make me nervous, because some resort to authoritarianism to make their perfect worlds. With the Liberites, I also considered how people who believe they’ve found the best way to live are often–not always, but often–blind to their own flaws. Exceptionalism, whether national or local, also makes me nervous.

In your acknowledgments, you thank Ron Tanner, Jessica Anya Blau, and Geoff Becker — your writing group, I believe, and what a writing group it is. This column has previously covered Tanner’s Missile Paradise and Blau’s The Trouble With Lexie; no doubt Becker will be giving us something new soon. Tell us a little about this prolific organization. How do these other writers influence you? Do you think you have more sex scenes because of Jessica Blau?

Those three are wonderful. They were an established writing posse before I moved to Baltimore ten years ago, but they welcomed me and changed everything. It’s like hanging out with Superman, Wonder Woman, and Batman. I get to be Robin–or Green Arrow, somebody like that. They’re such different writers, but they share dedication to story and craft and language. They make me want to write more, and their insights make everything I write better.

As for the sex scenes, the novel may not have more of them because of Jessica’s influence, but her example gave me more gumption to write the ones that are there. You read Jessica’s books, and you know you have no choice: you have to write the sex. Because life without sex isn’t life, and a novel has to be about life, right? It’s not all pain.

Join the author for his Baltimore launch on May 10. Details on the Events page of his website, michael-downs.net.