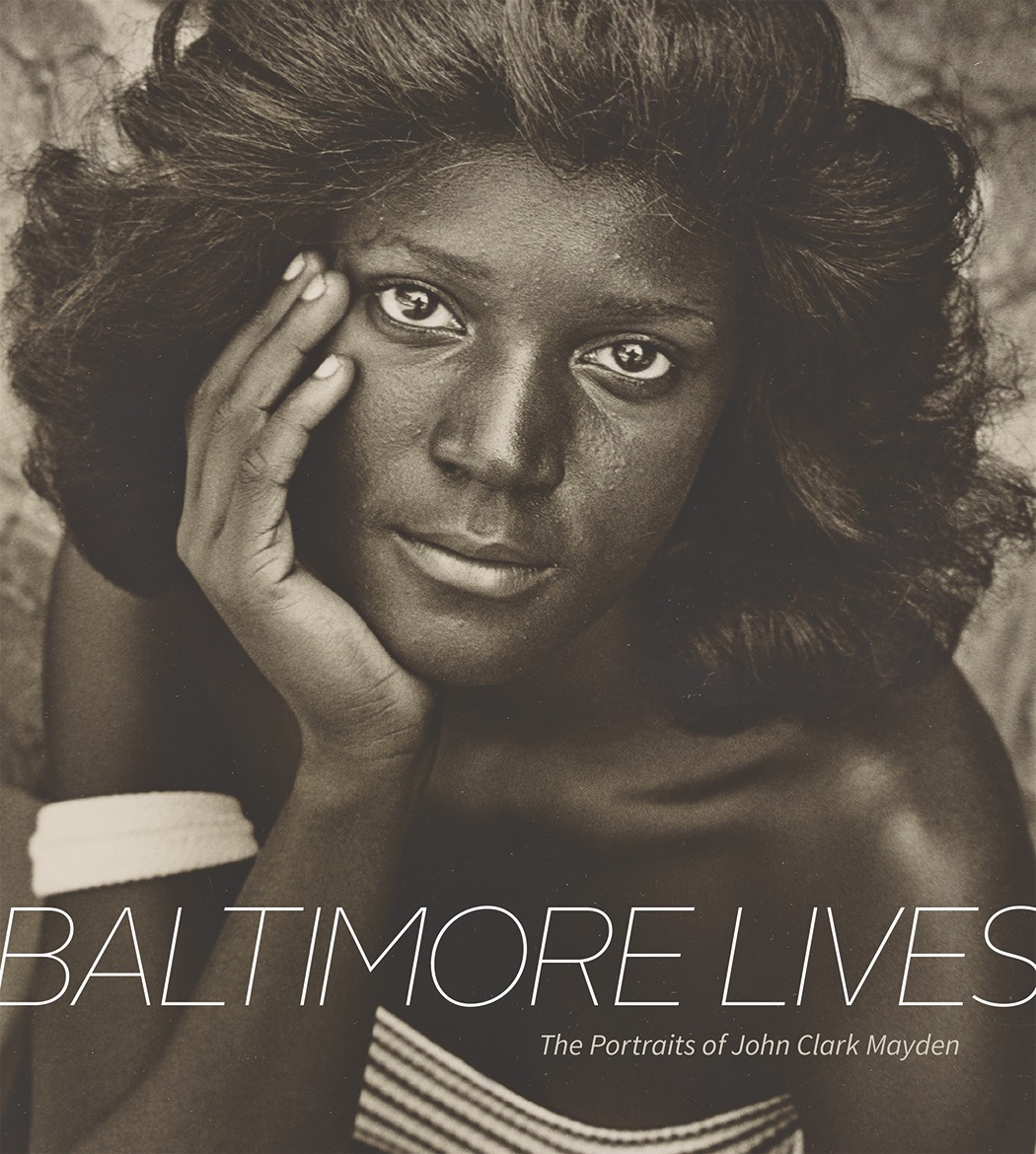 Sun-bright marble steps, grey Formstone turrets, and velvety shadows frame the subjects of “Baltimore Lives: The Portraits of John Clark Mayden,” a remarkable collection of black-and-white Baltimore street photography and portraiture from 1970-2012. Mayden, a Baltimore native and Northwestern High School graduate, is a practicing attorney as well as an artist. His works have been exhibited at the Corcoran Gallery of Art, the BMA, the Walters, and most recently, Johns Hopkins University’s George Peabody Library. “Baltimore Lives” is his first book.

Every photo in the book holds stories, in the expression of the subject’s face, the angle of their shoulders, or the shape of their silhouette receding from the viewer. Only one of the 101 photographs in this collection is an object rather than a person: a pair of roller skates on a wooden porch, left right where the feet that wore them stopped, probably seconds before. Framed so the would-be wearer is slightly below eye level with the camera, the viewer almost sees the child who just ran off.

Each two-photo spread is a careful juxtaposition: an old man and a child, photographed decades apart, heads cocked at the same angle; crooked elbows pointing to each other across the book’s center margin; the same subject twice, moments in between, printed on differently toned paper. JHU Libraries Dean Winston Tabb’s forward, a biographical sketch by the photographer’s sister, Ruth Mayden, an essay by Michael D. Harris, and Gabrielle Dean’s curatorial notes further contextualize the collection.

Mayden dwells lovingly on the details that traditional portrait artists erase: bus stop ads, public transit signage, and cluttered shop windows. Focusing on predominantly Black, low-income and working-class people – “unseen people,” as he puts it – the collection spans four decades, documenting a community both in flux and continuous, both impacted by a history of racism and celebrating itself.

We spoke over the phone on a sunny, early spring morning. 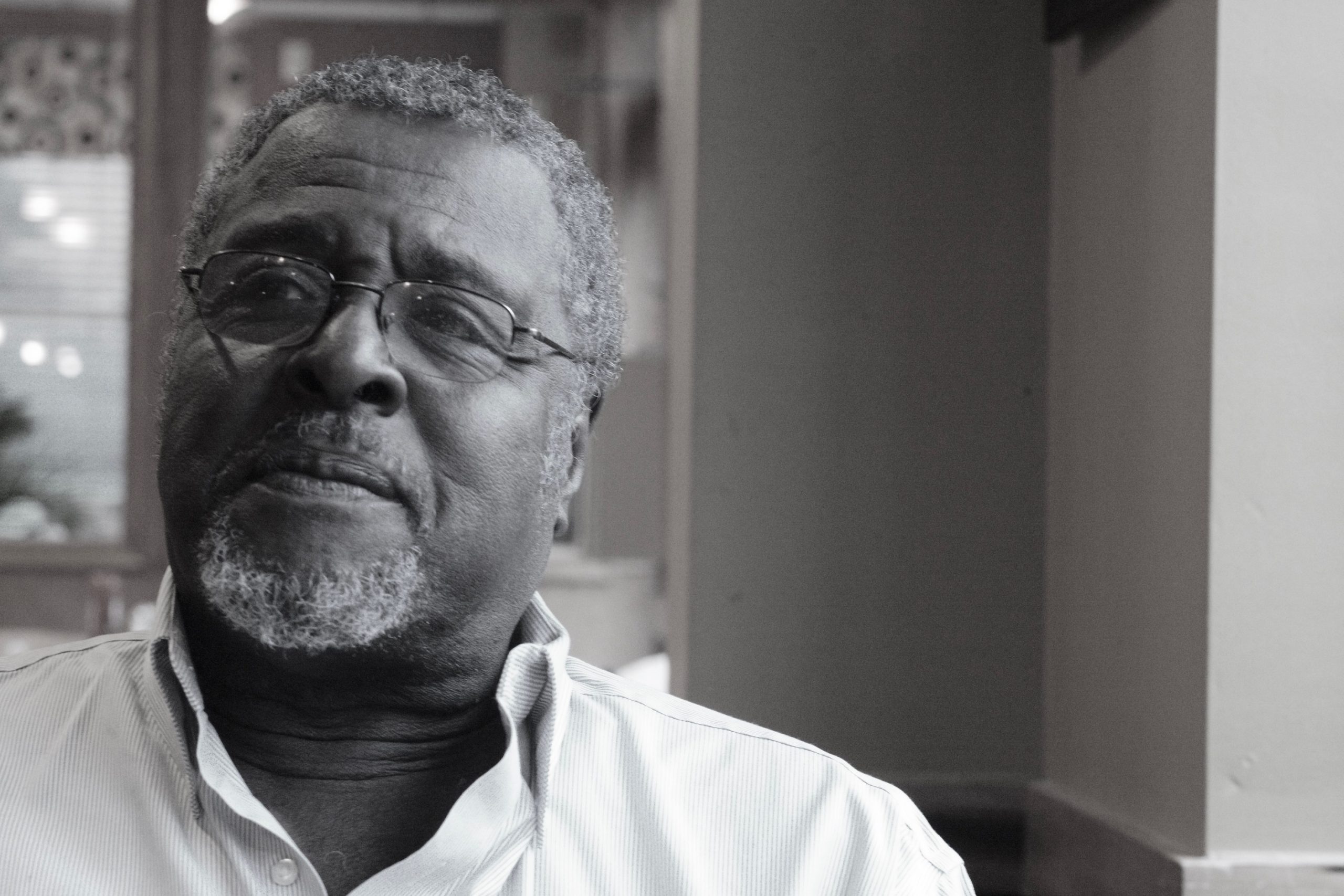 Baltimore Fishbowl: One message I took from the book is that documentation can be an act of political resistance. Does that ring true to you?

John Clark Mayden: “Resistance” could be used. Definitely a statement of position. And resistance would work for me in the sense of the necessity for change, for improvement. But images are presented so that people can pull from it what they feel and see. I can’t make you see it from my point view but I can certainly expose you to it.

I became politically aware in the ’50s. I grew up in the Union Baptist Church. They were very active in the Civil Rights movement. I think what I said was “big people are upset, this must be serious.” They would organize picketing from the church. And my work is a reflection of that. What I was looking at was the unseen people, seeing the unseen, that has always been a constant in my life, before photography.

My involvement in the city was beyond just the pictures. I ended up becoming involved in the Union Baptist Church, the Druid Hill YMCA. And then I moved up the street to the only [Black] bank that was up there and I was on that board for over ten years.

BFB: What has shifted and what has endured in Baltimore since you began documenting the city?

What has changed is that the space has opened out. When I started in 1970, Baltimore was a city of over one million people. Most of the rowhouses were occupied and space was at a premium. Since then a lot of people have left the city, houses were vacant, became vandalized, were boarded and razed. There’s been more green space created because the city could not afford to maintain all this inventory. I never thought that rowhouses would become endangered but now you can see that’s happening sometimes because of the cost to restore them. The green space isn’t a bad thing for people because you need that, the blend, but I love rowhouses.

BFB: Can you speak to how Baltimore’s infamous segregation has operated and changed in local art communities?

JCM: I recall the solo exhibition that I had at the Walters came about with them contacting me in part because they were blasted for not showing Black artists. This is in the 80s, so I got a random call asking me if I would be interested. At that time all they did principally were antiquities, the artists were all deceased. They were changing and I suppose I added to the change — an attempt for inclusion in an area where before there was exclusion. I’ve seen growth, substantial growth, a number of artists that have emerged.

I was part of Urban Services Cultural Arts program. A number of people received their first exposure and training there. The first exhibition was 1978 so what I saw was a definite need because Black people didn’t have a place of comfort where you could go in and see people like you, and think “hm, there could be an opportunity.’ I didn’t get the full impact of that until 2008 when I was at Syracuse and a guy came up to me. He told me he taught in New York City and he went to that first exhibition and that opened his eyes to what he could do and he did it. And it really made me smile because we achieved our purpose.

BFB: How did you balance two occupations — artist and attorney — so seemingly at odds with one another?

JCM: It limited the amount of sleep that I received! And this is the truth of it. My wife has always been supportive and as a result of her supportiveness I’ve always had a darkroom where we’ve lived.

BFB: So most of your photos were taken outside business hours?

JCM: Without hesitation the majority were. But towards the last couple of years that I was chief solicitor I would not eat lunch, I would go to work and walk through downtown because that wasn’t normally an area of focus. I realized that this is the end of my era here in this area. I wanted to record it the way I saw it during my working years there as an attorney, so the only time that I could take it would be during those business hours. So out of necessity I would do it, sometimes seven, eight o’clock in the morning, I would see it waking up. I would walk from city hall to South Charles Street and I’d hit the court houses and photograph around there: bus riders, step sitters, pants and posture, and snow scenes.

BFB: Has the pandemic affected how you work?

JCM: I have not been street shooting out there since March of last year. I was on a roll shooting and suddenly I couldn’t get out there anymore. I have sitting probably about 30 pages of negatives. I can feel that I’m going to get after it, but things have to be in sync. 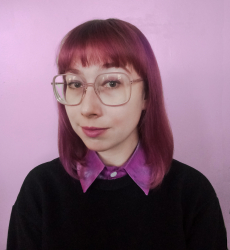 Kate Hardwicke
Kate Hardwicke is a multimedia artist and writer. She is currently working on a Master's in Design at University of Baltimore.