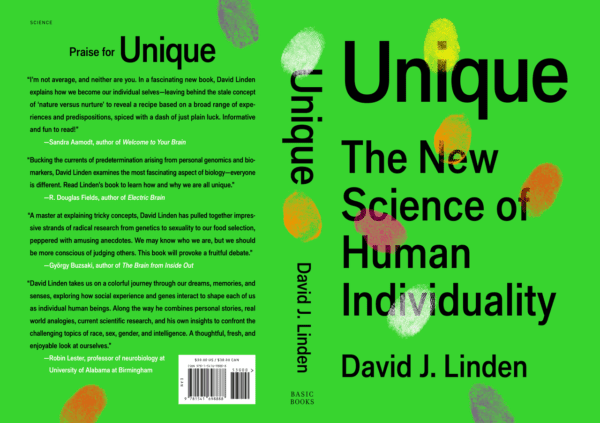 As of this writing, there are – give or take – 7,815,637,687 human beings living on planet Earth.  This staggeringly large number is made even more unfathomable by the fact that each one of us is unique in the particular combination of features that make us, well, us.

How we become the individuals we become is the fascinating question that Johns Hopkins Neuroscience professor David J. Linden explores in his latest book “Unique: The New Science of Human Individuality.”  It is a big question, and Linden tackles not only the roles that genetics and experience play in shaping who we are, but also the varieties of human experiences found in traits ranging from food and sexual preference to gender and race – and more.

Though covering this vast topic in 256 pages may seem daunting, Linden is an experienced communicator of complex science having previously authored three highly successful books on neuroscience for a general audience (Touch, The Accidental Mind, and The Compass of Pleasure) and edited a book of essays written by fellow neuroscientists (Think Tank).  (He also teaches a course at Johns Hopkins University on writing about the brain that I took as a graduate student.)

Unique emphatically pushes beyond outdated notions of individuality as being the simple byproduct of “nature vs nurture” and instead offers a vision that is both more complex and awe-inspiring.

“We’re actually a collection of thirty-seven trillion cells, each with a somewhat different genome. That’s pretty hard to imagine,” he writes. “It’s not just that it takes a village to raise a child. Each child is a village—or rather, a huge metropolis—of related but genetically unique individual cells. But it gets even more complicated.”

By deftly weaving in historical vignettes and anecdotes from his own life with clear explanations of scientific findings and research methodologies, Linden writes about our current understanding of individuality in a way that’s both personal and universal – perfectly reflecting our experience of being an individual.

BFB: Why did you decide to write about human individuality?

David J. Linden: I got the idea to write about human individuality when I found myself single five years ago and started online dating. So, there I am on OkCupid. And, you know, reading all these profiles of these various women and they’re basically lists of traits. When people are trying to describe themselves, they’re listing traits. They’re saying things like I tend to wake up early in the morning. I like white chocolate, I like hoppy beer, and I have perfect pitch.

So if you’re a nerd like me, you begin to wonder well, what’s the deal? How do these traits come to pass? And can we really think about it in terms of the classic formulation of nature versus nurture?

BFB: I love your extended rant [in the book] about the expression “nature versus nurture.”  What’s so wrong about that phrase? And why do you think it’s really stuck in the popular imagination?

DJL: I think it’s stuck because it’s cute to say.  It rhymes and has a good beat – you can dance to it. It’s like “if the gloves don’t fit, you must acquit.”  It’s one of the things that sticks in your mind.

A minor thing is you say “nature” to mean heredity. Well, alright, I’ll go along with that, whatever.  And then the problem is all the things that are not heredity are then “nurture,” but nurture means how your parents and your community raised you. And of course, those are important factors, but they’re far from the whole deal. Not only are there very many other social experiences, other than in the family or community, but there’s all these experiences that aren’t social at all, like whether your mother was fighting off influenza while she was pregnant with you, what food she ate, and the day length and the latitude where you grew up in the first two years of your life.

And there’s “versus.” “Versus” is stupid because it makes you think you got heredity and you got experience, [and] you can either have more of one or the other. And in truth, they interact enormously. Like, if you’re fortunate enough to be born fast and coordinated, then you’ll probably like sports and then you’ll probably practice sports and play sports a lot and get better at sports.

And the final thing is that there’s a huge bit missing to all this. When genetically identical twins are born, they basically got the same DNA. And they have more or less the same experience in the womb up to that point side by side. And they’re born and they’re not really identical, either in appearance, or the volume of their organs or temperament? One can be mellow and the other fuss. It happens all the time.

BFB: What was the most surprising thing you’ve learned about human individuality while researching the book? Because you have so many tidbits in there.

DJL: I think the thing that was the most surprising and counterintuitive to me has to do with the effects of birth order in the family. I had always sort of bought into this idea that firstborn children, because of their role in the family, tend to be leaders, innovators, risk-takers, while your middle borns are more negotiators, and your later borns are kind of clever, avoid-the-police types — used to avoiding parents who at that point are really distracted. And remarkably, this turns out to be true only within the dynamic of the family. It’s absolutely true. Firstborns really do dominate their younger siblings, and the middle kids really do negotiate. And the youngest kids really, really do try to be clever and sneak around. But when they go out into the world, that all falls apart. And in a way, it makes total sense. Because you may be the firstborn, you may be the big fish in the pond in your family, but on the playground, you’re almost certainly not.  Kids are very good at matching the situation.

So that was a big shock to me that birth order really doesn’t predict personality other than within the dynamics of the family.

BFB: What would you say is the takeaway for the readers of this book?

DJL: I would say one of them is to revise the nature versus nurture formulation. But another one, I think, has to do with personal agency.

A lot of people say, Well, if I’m admitting that there’s heritable contributions to behavioral traits, that turns me into a robot. I’m a slave of my genes.

And that’s not true.

That said, way more of what we do in an average day is habitual than we realize. Adrian Haith, at Hopkins famously said, “we’re a big pile of habit with a thin veneer of decision-making on top of it,” and I think he’s right.

But what’s also interesting is that it doesn’t feel that way, right? It feels like we are driving the bus, each of us are in charge: I can go here, I go there, I can change my mind, I can do this, I can do that. What is he mean I’m a big pile of habit? So to me, an interesting question that comes out of this is then, why is it useful?

Why should people feel like they have more of a sense of agency than they really do? I don’t really know the answer. But my speculation is that you need that to not be stymied when you need to make rapid decisions. You know, if the tiger is chasing you don’t have to go, “Oh, can I really trust my senses here?  What should I do? Am I really in charge?”  I think you have to have enough of a sense of personal agency to act rapidly.

The virtual launch of “Unique” features Baltimore Fishbowl columnist Marion Winik in conversation with David Linden, sponsored by the Ivy Bookshop, Sunday, October 11, 6:30 pm. To register to attend the event, go to the Ivy’s event page. 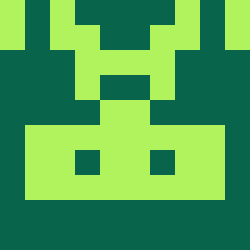 Richard Sima
Richard Sima is a science writer based in Baltimore, Md. He covers the environmental and life sciences and has written for Scientific American, Discover, New Scientist, and elsewhere. He has a Ph.D. in neuroscience from Johns Hopkins University and an undergraduate degree in neurobiology from Harvard College.