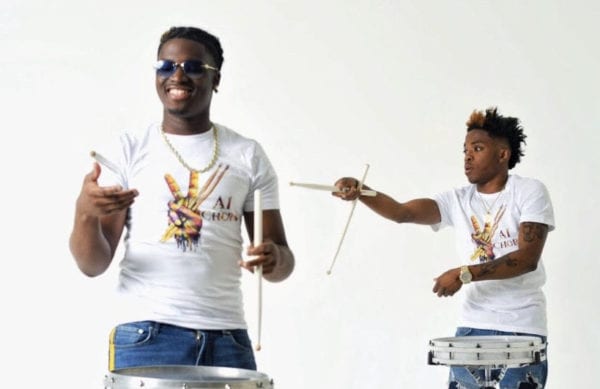 The members behind A1 Chops had confidence in their abilities as entertainers, but they didn't expect success to come this fast.

"Within two years of us street performing, we were noticed by Ellen, which was shocking," says Malik Perry, one half of the group.

That would be comedian and talk show host Ellen DeGeneres. Timothy Fletcher, the other member of A1 Chops, filmed a video for singer Ciara's "Level Up" Challenge that became a smash hit. In it, Fletcher lays down a rapid-fire drumline beat while choreographing a dance around his drum that boasts a high number of steps, hip shakes and stick tricks.

Fletcher and Perry performed together on "The Ellen Show" in September 2018, and the host surprised them with new gear and $10,000 apiece. But DeGeneres wasn't done there. Upon learning Fletcher and Perry were taking time out of their now-busy schedule to volunteer with young musicians at Edmondson-Westside High School, she invited the duo back on the show that November to tell them they would be the stars of a new web series called "The Build Up," which kicked off with the duo receiving a newly refurbished apartment.

Earlier this year, viewers of the series saw A1 Chops perform at halftime of a Ravens game and, with the help of remodelers Anthony Carrino and John Colaneri, revamp the band room at Edmondson-Westside and spruce up the courtyard at the Downtown Cultural Arts Center.

All that time, A1 Chops has consistently posted new videos set to pop, hip-hop, R&B and more.

"As long as it's fast and the beat knocks, yeah, that's usually the song I look for," says Perry, adding that each A1 Chops routine starts off with a drum freestyle over the track.

The high-profile performances have continued, ranging from a guest appearance alongside rapper Lil Baby on the BET Awards to top billing at the city's AFRAM Festival. Now, A1 Chops is looking to tour the country.

Fletcher says that no matter where A1 Chops goes, the moves they incorporate and the styles they rock will always be a reflection of Baltimore.