I am not quite sure how I missed this gem last night:

According to the person responsible for the design, Spyder’s Production Art Manager, Matt Strackbein, “when creating the [U.S. Ski Team Olympic] race suit graphics we knew it was crucial that the racers felt a sincere sense of patriotism, so we utilized ‘stars and stripes’ in a less traditional, more dynamic way … as important as it was to represent the U.S.A., it was equally important that the athletes look and feel fast. 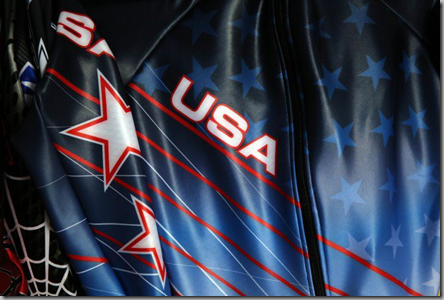 When I began the design process, I thought about times when I feel that same degree of patriotism and I immediately thought about the National Anthem, so I decided to use the song lyrics from the Star Spangled Banner for inspiration. Per the song, one of the most meaningful sightings of the American Flag happened the morning after Francis Scott key witnessed the bombardment of Fort McHenry. There, ‘by dawn’s early light,’ Key saw that ‘our flag was still there,’ albeit a much larger flag than the small storm-flag that had flown over the fort all night during the battle. But what stood out most upon reading the lyrics was that, because the air was so laden with smoke after the battle, Key recognized it rippling in the water off the edge of the ship on which he was being held captive. 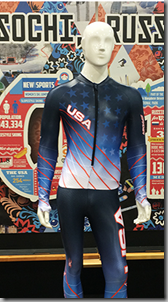 “I tried to imagine what he was feeling in his heart at that moment – surely a deep sense of pride, not unlike the feeling an athlete must have when they win Olympic Gold. So, for the race suit, we used blue and white fades in the design to represent that early morning setting, and thinner red and white stripes to represent the flag rippling in the water. The goal was to capture as much of that imagery in the race suit as possible so that the U.S. Ski Team Athletes can potentially feel that heightened sense of hope, pride, courage and determination.”

END_OF_DOCUMENT_TOKEN_TO_BE_REPLACED

“We Voted!”: Maryland Sets Early Record + How to Motivate Your Apathetic Friends

Who was early voter #219,802 Wednesday night? Come on, don’t be shy, sir or ma’am. Okay, you’re right, we may never know our hero’s name, but he or she marked an important, enthusiastic moment in state voting history, officially cranking early vote turnout ahead of the impressive state numbers from 2010’s (inaugural) early gubernatorial election phase, according to new data from the State Board of Elections. And the nation’s following admirable advance-voting suit.

We’re familiar with the military phrase, “leave no man behind,” but what about, “leave no man’s best friend behind?” While our U.S. soldiers were away from home in Iraq and Afghanistan, they made stray dogs and cats, and even a donkey, members of their combat zone family. The SPCA International’s “Operation Baghdad Pups” helps reunite furry loved ones with a soldier-owner once back on U.S. soil.

U.S. troops have pulled out of Iraq, but the American presence — and its need for “patriot pets” — remains. Terri Crisp, author and program manager for Operation Baghdad Pups, continues to fly to Iraq to bring home Americans’ pets. She’s following leads at this time to find a home for brother and sister Kurdish Shepherd mixes, Rookie and Monty, who she might place with a vet from Texas.

Crisp estimates that there are currently 16,000 Americans in Iraq working as civilian contractors or Embassy and Consulate employees. Some of these remaining American citizens tell Crisp, who’s made 40 trips to Iraq and Afghanistan, that they feel like prisoners at times. Crisp says, “The companionship of a dog or cat is even more crucial because they’re isolated on a very small base and can’t go anywhere.”

In fact, they’re willing to risk their safety to find a pet. In the absence of the U.S. military, Crisp says Americans have to rely on the Iraqi police for safety if they do leave base.

Considering the great lengths Americans in hostile territory go to make these friends and the great comfort their friends provide in return, it’s understandable that they don’t want to leave their pets behind to be euthanized or revert back to strays.

While not every pet can be reconnected with its original owner, Operation Baghdad Pups strives to match these animals with people who understand what they have endured and who can care for them accordingly.