Weird news abounded in 2017, from quirky oddball real estate to surprising nefarious (alleged) behavior. Here were our reports on some of the strangest things the last 12 months had to offer around Baltimore and the rest of Maryland.

It’s rare that you’ll find a 55-acre island for sale in the Chesapeake Bay. It’s ever rarer to read this in the listing: “About 30 +/- goats live on the island.”

Shockingly, this property hasn’t received any bites since it was listed in July, according to its still-active listing. With more than 1.25 miles of shoreline and a self-sustaining goatherd, it’s the only one like it for sale in Maryland. And it only costs $1.5 million.

Crisfield-based Bob Bradshaw told The Daily Times of Salisbury this past summer that his family has owned the island since 1956, though it’s a mystery when the goats arrived. The previous herd was wiped out in a particularly rough winter, but a retired couple bought a bunch of new ones and released them to roam the island.

The Bradshaws were under contract to sell their island to a buyer from Texas for a whopping $14 million in 2008, but he reportedly backed out when the real estate market collapsed. Since then they’ve gradually been lowering the price in an effort to sell.

The new owner will need a boat to access their kingdom from the surrounding area, which includes Smith Island and Crisfield. The property is largely untouched, but has already been outfitted for electrical service and is zoned for two buildings. It also has self-protecting elevation from sea level rise, though our president and nearby Tanger Island Mayor James Eskridge have agreed that’s not happening, anyway.

Honorable mention: In related remote, coastal real estate news, the federal government auctioned off a 144-year-old lighthouse in the Patapsco River this summer. With a starting price of $15,000, a bidding war took the price for the Craighill Channel Lower Range Front Light Station up to $96,000. That means one lucky buyer took home a 1.5-story, boat-accessible-only dwelling that sits 25 feet above the water. Luckily for them, it’s close enough to comfortably commute to Baltimore. 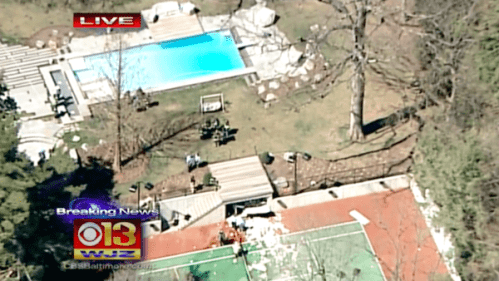 4) An Explosion at Scott Plank’s House

For one afternoon this year, TV news helicopters hovered over the backyard of a Blythewood Road home belonging to local real estate developer Scott Plank. The ritzy street is known for its large houses and high-profile residents, but on April 5, it drew some new attention after a propane tank exploded and tore a hole in a service building near Plank’s tennis court. The blast was loud enough to be heard several houses away and drew more than 50 emergency personnel and 12 pieces of rescue apparatus. One person was reportedly treated for burn injuries; Plank wasn’t home at the time.

Scott Plank, founder of War Horse Cities and brother of Under Armour CEO Kevin Plank, made other headlines in 2017. In July, he attended the opening of the redeveloped West Baltimore Police Station, a project he led. In October, War Horse Cities acquired multiple marinas, offices and a helipad in Canton. And in November, he was accused in a police report of exposing himself to a woman in a lobby one early morning at the Silo Point Condominium in Locust Point, where he also lives. We’ll have to see how 2018 holds up in comparison.

3) A High-Profile Tricycle Theft in Hampden

Few in Hampden in 2017 will forget the time Lou Catelli’s tricycle went missing. Catelli, a.k.a. Will Bauer, locked his tricycle up outside the Hampden Family Center on W. 36th Street in May. One Sunday morning, a surveillance camera captured a man in a utility vest cutting it loose with a pair of bolt-cutters and making off with the three-wheeler.

For nearly three weeks, friends of the so-called Mayor of Hampden helped him track the vehicle around town. One person photographed two teens riding it at the Shopper’s Food & Pharmacy at Mondawmin Mall. Another said they spotted it Gwynns Falls Parkway at Braddish Avenue, also near Mondawmin.

The case attracted a shocking amount of attention for a tricycle theft – enough that when the perpetrator did return it, Northern District Police Major. Rich Gibson and two other police officials rode it down W. 36th Street to present it to Catelli at a media rendezvous at the corner of Hickory Avenue.

Speaking with Baltimore Fishbowl, Catelli said he wasn’t mad but was actually impressed that the thief managed to lug the heavy, steel-made tricycle around city streets for so long. “It is in great shape,” he wrote in a Facebook message, adding, “I want to hire the kid to operate a pedicab service in Hampden!”

Did you know Rosedale has its own Ku Klux Klan chapter? It became public knowledge when its leader, 52-year-old KKK imperial wizard Richard Preston, was charged with firing a gun on Aug. 12 at a violent white supremacist rally in Charlottesville.

That day, Preston and other white nationalists gathered to protest the proposed removal of a statue of Confederate general Robert E. Lee. They met with counter-protesters in a confrontation that turned deadly. By the end, three people were dead and 35 injured.

Preston’s presence became known when the ACLU of Virginia released a clip of him, clad in a bulletproof vest and bucking at a black protester with a homemade flamethrower, then brandishing a handgun. (Someone also yelled the n-word, though it’s difficult to tell if it was him.) Preston then appeared to fire a single shot in the protester’s direction and simply walk away, observed by a line of non-interfering state troopers standing behind a barricade.

Virginia authorities charged Preston with discharging a firearm within 1,000 feet of a school, and he was apprehended in Baltimore County several weeks later. He was denied bail in October and indicted by a grand jury on Dec. 18, according to Charlottesville court records. His trial doesn’t begin until May 9, 2018.

The strangest story of 2017 involves two Baltimore-area teachers who are married and have both been accused in the last two months of sexual misconduct with teenagers.

Alyssia Reddy, who was recently employed at St. Paul’s School for Girls in Lutherville, was arrested on sexual assault and other charges last month for allegedly having sex with a 16-year-old boy in Pennsylvania. One week later, McDonogh School headmaster Charles Britton wrote in a letter to families that the school had fired her husband, Michael Reddy, due to alleged sexual relations between him and a teenage non-student more than 10 years ago. Michael was an English instructor at the Upper School, but “is no longer employed” and is barred from campus, Britton wrote.

While details of the incident involving Michael Reddy remain scant – a school spokeswoman said they filed a report with Baltimore County police, though a police department spokeswoman said they didn’t have a case on file – information on Alyssia’s case was available. Police in Bucks County, Pa., said they received a report that she and a boy engaged in intercourse at a public park during the spring. Reddy was teaching at the Pennington School, a co-ed boarding school in New Jersey, at the time.

Britton noted Alyssia had also worked as a substitute at McDonogh in 2011, while Michael had worked there from 2008 to 2013 and was re-hired as a teacher this year.