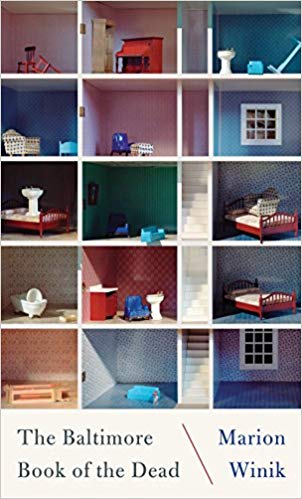 Marion Winik just released her latest memoir, “The Baltimore Book of the Dead,” out from Counterpoint. This week we publish an excerpt from the introduction of the book, which is a compilation of essays about people she’s lost. Marion approaches the touchy subject of death with emotion, wisdom, and humor as only she can. If you’re a fan of Bohemian Rhapsody, you’re in for a treat. Read on. – S.D.

During the spring of 2007, in the dark days towards the end of our marriage, my second husband and I managed to get ourselves invited to a small house party on the South Coast of Jamaica, held over the weekend of the Calabash Festival, a major annual literary event with writers from all over the Caribbean and the world. I had just begun writing The Glen Rock Book of the Dead, the predecessor to this volume.

The first morning, all the guests went up the road to Jake’s, the resort where the festival is held, in our hosts’ van. We heard readings, paged through books on sale, sipped frozen drinks. My husband and I sipped many of them. The group went home for lunch, planning to return in the afternoon, but storm clouds massed and broke and no one wanted to go back in the pouring rain.

Our friends were expecting another visitor for drinks that evening. This man turned out to be a writer for the island’s main newspaper and also a native of the fishing village where the house was located. He spoke passionately about Jamaica’s history and politics. He told us about his father and his uncles and cousins, many of them claimed by the greedy sea. One story after another poured out of him, stories of people dying in boats, in hurricanes, on cliffs, people dying even at other people’s funerals.

I asked if he would write about them, and he said he planned to, told me how it would begin with him standing on the beach with his Aunt Lucy when he was very young, trying to understand the look on her face as she watched the ocean.

After he left, we sat down to dinner: our hosts, four other friends of theirs, my husband, now definitively in the bag, and me. The rain hammered on the roof as the local women who worked for them brought dishes of calalloo and jerk meats.

Since we were skipping the evening program at the festival, I suggested that after dinner I could fill in with a reading from the collection I was working on. The pieces were very new and I hadn’t had the opportunity to get people’s reactions. I was eager to do so. I wished that the journalist had still been there, but the other guests seemed interested enough.

The first one I read was about my father; the second was called “The Realtor,” about the spunky Texas woman who had sold my house years back. The short piece had several scenes, one in Venice, one in her backyard, one in her bedroom when she was dying of cancer. I had barely finished it when one of the women at the table blurted emotionally, Please, I’m on vacation. I don’t want to hear this depressing stuff. She jumped up with her hand over her mouth and fled to her room.

I wanted to go to her, but my hostess thought I should not. Well, then, I said, why don’t I just continue. My hostess didn’t think much of that idea, either. At this point, she was well on her way to regretting having invited us, and we would both give her further reasons to do so for the remainder of the weekend, the final mistake being leaving too small a tip for the staff, which I still feel bad about.

I reluctantly put aside my laptop. A debate ensued among the remaining guests about just how depressing the pieces really were, and whether the topic of death had any proper place at the dinner table.

I suggested that, at least from my perspective, our lives are so full of dead people that any sane way of living involves constant remembrance. My days and my thoughts are shaped almost as much by people who are no longer here as those who are. That to cast this remembrance as depressing is to deprive ourselves of our history, our context, and even one of our pleasures, if a bittersweet one. Meeting the journalist earlier in the evening had been a more meaningful experience because he’d told us about his father and uncles.

Death is the subtext of life, there is no way around it. It is the foundation of life’s meaning and value. It is the ultimate game-changer, the shift in perspective that puts everything in its place, yet it is a part of our story we know little about and have little control over.

So at the very least, it’s interesting.

On the other hand, as far as death at the dinner table goes, some respectful space must be made for grief. Grief is socially awkward, if not all-out anti-social, difficult to accommodate even in one-on-one conversations. Even now, when I mention that I was widowed in my first marriage, or that my first baby was stillborn, I see people’s faces fall, and I rush to explain that it was a long, long time ago and it was very sad but I am fine now. I really am. But I am also trying to spare them the awkwardness of having to come up with some appropriate, or more likely inappropriate, response, perhaps making some well-intentioned but doomed attempt to help me get over it, possibly by implying that it was God’s will.

Which brings me back to the time when I was not fine, after those deaths and others as well, and there I find part of my motivation for writing these books, for dwelling so long in the graveyard, for finding a way to talk about it.

In times of intense grief, I have tried all the usual methods of escape—distraction, compensation, intoxication; therapies and treatments and antidotes for body and soul. I once had a massage from a woman named Chaka that unleashed a hurricane of tears. Ultimately, instead of attempting to flee from the pain of loss, I decided to spend time with it, to linger, to let these thoughts and feelings bloom inside me into something else.

Why do we build memorials, decorate gravesites, set up shrines, stitch an AIDS quilt, paint three murals for Freddie Gray, what are these ghostly white bicycles woven with flowers on Charles and Roland Avenues? These are places to put our grief, places outside ourselves. And when you make a memorial object with your own hands, some of the anguish dissolves into what you are making. You are returned from the world of the dead to the world of the living.

After that trip to Jamaica, 2007 went straight downhill. The marriage was almost over, and in September my mother was diagnosed with lung cancer. Every time I went to visit her, we would talk about different people I wanted to include in the book; there was so much I didn’t know. Meanwhile, it started to be obvious that she could soon become one of its characters. Hell, no, I thought, quickly completing and turning in the manuscript of The Glen Rock Book of the Dead so she would not be in it, as if this would have mystical power to keep her alive.

Ten years later, this sequel — written in Baltimore — begins with her, and adds people who died between 2008 and 2017.

To read the rest of the introduction and the 61 portraits that follow, pick up a copy of “The Baltimore Book of the Dead” at your local bookseller or corporate megalith. Marion Winik will be reading at the Ivy Bookshop on Oct. 8 at 7 p.m. Find a complete list of events (including a return to Glen Rock) at marionwinik.com.