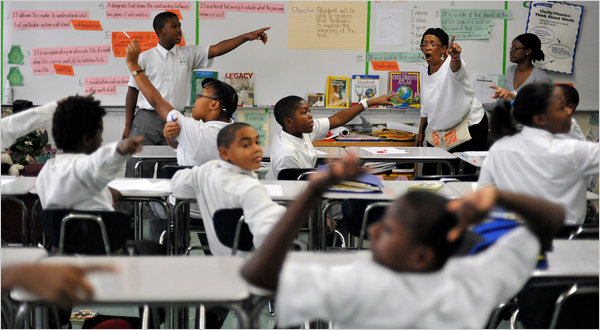 Baltimore schools, which under CEO Andrés Alonso had been steadily improving their Maryland State Assessment scores since 2007, have started to stagnate and in some subjects drop in performance, results suggest. This means harder work for teachers and administrators, especially in the city, where schools are lagging behind the state average.

Alonso started his reform program pushing the state to spend less on administrative overhead and more on the schools themselves, giving principals more autonomy and weeding out ineffective programs. His tactics were working for a while but it seems like he’s hit a roadblock – a chalkboard ceiling, you might call it, which schools are struggling to break through.

Obviously there’s been a lot of scrambling to figure about what the exact problems are – it could be that the charter schools Alonso established aren’t performing up to snuff, or that the administrative overhead is still too heavy, or that the students simply aren’t being given the intellectual resources they need outside of the classroom. Personally, I think the best thing for these schools is to give them some decent funding. Where do we get the cash for that, you might ask? Well, we could start with our prisons – siphoning money from the bloated cell blocks into classrooms. It’s not the easiest and certainly not the most immediate patch, but I think it’s an institutional change that needs to be made.  You know, focus on preventing the issues rather than treating the symptoms.

The graphic below does a great job of using Philadelphia to outline the problems in our country’s prison/school budget allocations: