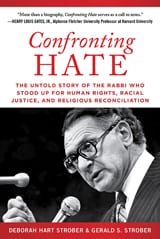 Confronting Hate: The Legacy of Rabbi Marc Tanenbaum
Reflections on the Life of A Proud Son of Baltimore and Why It Matters Now.
Join Rabbi Tanenbaum’s widow, Dr. Georgette Bennett as she addresses why Rabbi Tanenbaum’s moral leadership is tailor-made for this moment in our nation’s history. How do we live according to the Biblical commandment: Do Not Stand Idly By? How do we resist with conscience? What does our faith compel us to do? Click here for more details. 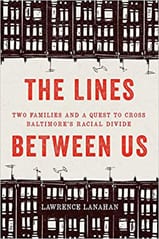 Lawrence Lanahan: The Lines Between Us: Two Families and a Quest to Cross Baltimore’s Racial Divide
A masterful narrative-with echoes of Evicted and The Color of Law-that brings to life the structures, policies, and beliefs that divide us. This eye-opening account of how a city creates its black, white, rich, and poor spaces suggests these problems are not intractable, but they are destined to persist until each of us-despite living in separate worlds-understands we have something at stake. Lawrence Lanahan has written for Al-Jazeera America, Columbia Journalism Review, NPR’s Morning Edition, and Colorlines, among other outlets. A recipient of the Carey Institute’s Logan Nonfiction Fellowship, Lanahan’s The Lines Between Us, a fifty-episode radio series for Baltimore’s WYPR, won Columbia University’s duPont Award. He lives in Baltimore. Click here for more details.

The Investigation, Prosecution, and Resignation of Vice-President Spiro Agnew: A Talk by Tim Baker, one of the prosecutors
On October 10, 1973, in the midst of Watergate, Spiro Agnew resigned and pled to a tax felony based on over $250,000 in bribes and kickbacks he had received as County Executive, Governor, and Vice President. Assistant U.S. Attorneys Barney Skolnik, Tim Baker, and Ron Liebman developed and prosecuted the case under George Beall, the U.S. Attorney for Maryland. Tim Baker’s talk will detail how the investigation began and progressed and how Elliot Richardson, the U.S. Attorney General, conducted the plea bargaining which achieved his overriding objective: the corrupt Vice-President’s removal from his position a heartbeat away from the Presidency. Click here for more details. 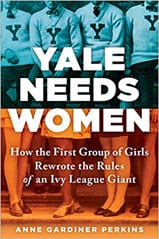 Anne Gardiner Perkins: Yale Needs Women
In partnership with the Pratt Library’s Writers LIVE Series, The Church of the Redeemer hosts Anne Perkins discussing her new book, Yale Needs Women. The news was so shocking that the New York Times ran it on the front page. Yale, which had banned women undergraduates for the previous 268 years, was finally going coed. Yale Needs Women tells for the first time the true story of the young women students who broke the gender barrier at Yale in September 1969. They came from all over the country: Chicago, Atlanta, Los Angeles, Baltimore, Boston, the Bronx. Few were prepared for what they found when they arrived. Outnumbered seven-to-one because of the gender quota Yale put in place, these young pioneers, most of them just teenagers, were barred from many of the privileges their male classmates took for granted. Yale Needs Women follows the story of five women students in particular—two black and three white—through the tumultuous early years of coeducation at Yale. Based on five years of archival research and eighty oral histories, Anne Gardiner Perkins’s unflinching account of a group of young women striving for change is an inspiring story of strength, resilience, and courage that continues to resonate today. Click here for more details.