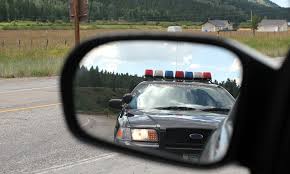 Time in a Bottle, Jim Croce, is playing on The Bridge when I get pulled over for speeding—I 87 just outside Albany. A state trooper, plumed all in gray with maroon points, comes to stand outside my window. He pauses to take in the full measure of the situation, looking down at me.

He says, “83,” as a statement of fact. I do not make a joke, something along the lines of, “Is that all?” I just hand over my license and registration. Yes, I was flying.

“Where you headed?” he says. He’s about my age, within five or ten, either direction, clean-shaven, thinning hair, no stranger to Time In A Bottle.

I don’t even go there—coming from aunt’s memorial service, heading to mother’s place in Vermont, up and out by 5 a.m. to relieve brother who is at wit’s end taking care of Alzheimer’s-diseased mother in rodent-infested house. The thing is to Say Less.

“Vermont,” I say, then wait, head properly bowed like the mourner I am.

“Any problems with your license?”

“Not that I know of.” I laugh, nervously. I’m a repeat offender on the Northway, always trying to shave time off the GPS’s ETA—ancient speeding ticket traveling through Glens Falls; ‘faulty speedometer’ ticket outside Elizabethtown, an act of generosity on the part of a different state trooper.

He goes to run my license and tags. I don’t take out my cell phone. The cars that I’ve passed are now whizzing by, one by one, thinking, most likely, “Serves her right.” My thoughts return to the memorial service, all those people gathered together in the barn at Green Hill Farm, family seat, magical kingdom, while outside a tempest raged–thunder, lightning, blinding rain, widespread flash flooding, just as it had at my own wedding there thirty years before.

This time the weather kicked off a last-minute re-siting of tables and seating for 150 from the tent in the riding ring (now known as the Wedding Ring) to the barn. My husband and I were number three of a long string of couples to be wed there.

The setting, as always, delivered in its storybook way.  Chickens settled on their roosts at ground level, a floor below, alongside the donkey and the goat. Or maybe the goat had died.  For that matter, maybe the donkey had died. I hadn’t seen him mixing in among the guests, as he would have in his younger days. Or maybe because of the storm he’d simply been put to bed in his stall next to the chickens, that stall so deeply fluffed with golden straw that I sometimes felt like bedding down there myself.

The first Green Hill Farm goat had been the donkey’s constant companion. When it died, the donkey went and stood by his grave in the back pasture, disconsolate. He wouldn’t eat or budge, nor could he be lured back to his stall. Fearing he’d die of grief, they eventually went out and found a replacement goat, an adorable kid, even though no one really wanted another goat which would probably, like the last one, destroy the landscaping, or clamber up on the hood of a car, or sometimes sneak in the house and take a nap on one of the freshly made canopy beds upstairs, just like a princess.

There were poetic, amusing, and loving tributes to my aunt Judy. She, who was not one to look for attention, would have been uncomfortable with it; she was a matriarch who just wanted to be one of the gang.

As in the Quaker tradition, we kept silence to allow time for any off-the-cuff speakers. The 150 assembled, collectively and individually, fell to thinking hard about my aunt. For me she’d been a model of flexibility and generosity, giving her bed, her whole master suite, over to visiting friends and relatives. She’d go tuck in in the attic, happily, or sleep on the couch in the keeping room. She never played the Queen card, although she certainly could have.

I had thought of what to say too late. We were already on to the meal, the party, the last big Green Hill Farm celebration. End of an era, everyone kept saying. I wanted to stay, to dance late into the night in celebration of my aunt’s life and that charmed place, soon to become some other family’s kingdom, but I was obligated in Vermont, and had to be up early. I might have been too shy to say it in front of so many anyway, to tell the story of how, when I was 12, I’d flown to Florida alone during the Christmas holidays to visit a pen pal with whom I exchanged ardent letters almost every day. I returned from this trip shaken by my first Christmas away from family and Vermont, my first Enchanted Kingdom Christmas. Even then the Disneyworld crowds were too much for me. I’d been gravely homesick. Traveling unaccompanied, I landed in Newark where I had to change planes. I’d plucked up all my courage to make this transfer. On the departures board, the word “Canceled” next to my flight cast in jeopardy all my precious emotional resources. I burst into tears explaining my dilemma at the information desk.

An agent from the airline was summoned. My parents had called to have me flagged down but he’d been on the lookout for someone who looked younger than me, he said. He’d missed me coming through the gate. I felt shame that I who looked so much older than my age was acting like one so much younger. Someone was on the way to pick me up, he said. He led me to a small, gray windowless room with a desk and a chair where I waited for nearly an hour, wondering who would come. No one had said. At last the door burst open and my aunt and uncle whooshed into my holding cell, seemingly overjoyed to see me, an instant party. They lived not far away in Franklin Lakes, but the roads were terrible, they reported. They did not wait around to put me on the next flight. Instead, we climbed gaily in the car and headed north, an 8-hour drive in near-blizzard conditions. Special delivery.

I feel guilty to say that they were the parents I always longed for, so fun and easy, my uncle who called me “a sight for sore eyes,” and my aunt who was always up for anything. Skydiving at 82! With my own parents, there was always an uncomfortable charge, the expectation of trouble or difficulty, which often panned out in one dismal way or another.

With John and Judy, my aunt and uncle, everything was an adventure. They seemed so genuinely happy to spend time with us, as if they had not a thing better in this world to do.

With them, I’d traveled the same stretch of highway along which I now waited for my speeding ticket. We’d stopped at a diner somewhere in the Adirondacks. I had a bowl of tomato soup and a grilled cheese sandwich. Even that—standard hot-lunch fare—seemed magical. I don’t remember the parental homecoming, but I remember that trip through a landscape deep with fresh snow, and the pleasure of having my aunt and uncle all to myself, of indulging in the fantasy that they were my parents. This is the story I might have told if I’d thought of it before the moments of silence were over.

The state trooper—so circumspect, probably a family man himself, is back again outside my window.

“I’m going to give you a break this time,” he says. He’s written me up for a faulty speedometer. No points, but there would be a fine.

He tips his hat, in my imagination, though to be honest I’m not even sure at the time of this writing that he had one on, and walks away. I call to his receding back, “I’ll slow it down!”  And I do. I pull out carefully, keeping to the slow lane while he zooms by in the fast lane, on to other pressing matters.

My brother is packed and ready to fly the roost when I get to my mother’s place, which is more along the lines of a poor woodcutter’s cottage compared to the enchanted kingdom of Green Hill Farm. Before taking off, he shows me where he’s cleverly concealed four mousetraps in the pantry behind the foodstuffs. It occurs to me that he is beginning to think like a mouse. He’s caught about 20, he says, since I was last home.

“I just throw them over the bank,” he says.

At home, in Vermont, as a child, and even now, when I return as an adult for caregiving stays with my mother, I have always felt like Cinderella, waiting for a fairy godmother to wave a wand and turn mice into horses, pumpkins into carriages, parents into aunts and uncles, and vice versa.