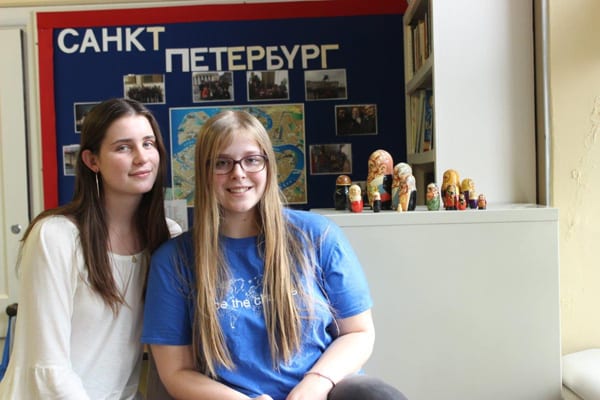 Friends School students Katrina Brazhnikov ’20 and Tricie Ledakis ’19 have been selected to represent the United States on the U.S. Delegation to the International Olympiada of Spoken Russian, which will take place in Moscow, December 2-8, 2018. Sponsored by The Pushkin Institute, MAPRYAL (International Association of Teachers of Russian Language and Literature), ACTR (American Councils of Teachers of Russian) and American Councils for International Education, the elite competition will feature delegations of high school students from four continents and 35 nations, including China, Cyprus, Peru, and Syria. (This will be the third consecutive year Friends School students have represented the United States at the International Olympiada in Moscow. Ryan Hardy ’19 was named to the U.S. Delegation in 2017 and Kyle Spawn ’17 in 2016. Prior to that Friends alumnae Kara Woo ’08 and Sarah Wilson ‘04, had been selected.)

Upon learning that two of her advanced Russian speakers had been chosen to represent the United States on the U.S. Delegation, Upper School Russian teacher Lee Roby emailed her Friends colleagues that “the unimaginable has happened…I told the girls early on to brace themselves and to not take the results too personally — that the delegation is to represent the United States and two students from not only the same state, but much less from the same school would never be selected to go. And I was wrong … Joyfully this time.”

Having each attained semifinalist status last spring by earning gold medals (with a tied score!) at the highest level of the Maryland ACTR Olympiada of Spoken Russian at Goucher College, Brazhnikov and Ledakis this fall competed in a semifinalist round of competition that included an online test and an essay submission to the Pushkin Institute in Moscow, and an interview in both Russian and English with American Councils representatives.

The Friends students, along with the remaining two U.S. delegates — from Cherokee High School in Marlton, N.J., and Central High School in St. Paul, Minn. — will be accompanied on their whirlwind trip by Nataliya Ushakova, a teacher of Russian at Staten Island Technical High School and four-time chaperone to the U.S. delegation for the International Olympiada. 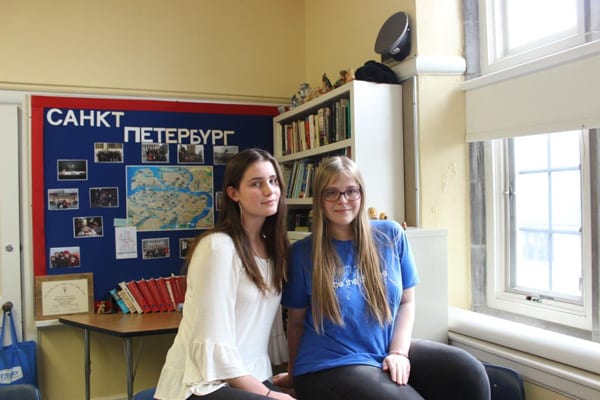 Katrina Brazhnikov’s reflects on the experience. “To prepare for the International Olympiada, both Tricie and I have to prepare 5-7 minute presentations,  in Russian. We were given a list of 20 presentation topics to pick from . I chose the topic, Путешествие моей мечты: где бы я хотел побывать в России, which means “The travel of my dreams: where I would like to go in Russia” for my presentation, or минн-проект as the Pushkin Insitute calls it in Russian. I am currently writing the dialogue for this presentation using travel vocabulary Ms. Roby provided me with. The presentation includes detailed descriptions of places I’d like to go to and excursions I could take there. I will also make a slides presentation containing pictures of these places and their excursions and will begin to practice my presentation before I go to the Olympiada.  Although I am not preparing for this at the moment, I am also going to try to engage in the other presentation opportunities they offer us during the Olympiada and will prepare for those there.

Friends School’s Russian language program dates back to 1956, when history teacher and self-taught Russian speaker Claire Walker – one year before Russia launched Sputnik – began teaching students the then-“forbidden” language. (At the time, the School was one of only 16 U.S. high schools, public or private, to offer Russian.) Since that time Friends students have consistently distinguished themselves in the U.S. and abroad in the study of Russian language and culture. In addition to the aforementioned U.S. delegates to the International Olympiada, five Friends students since 2009 have received full-year scholarships and approximately 20 have been awarded summer scholarships to study in Russia-speaking countries (Estonia, Latvia, Moldova) through the National Security Language Initiative for Youth (NSLI-Y) program.

Now in its 234th year, Friends School of Baltimore is a college preparatory Quaker school serving students in Pre-K – 12th grade. Friends’ commitment to coeducation is grounded in the School’s centuries’ old Quaker practice of seeking truth from many sources. Simply put, we believe students gain a deeper understanding of complex issues when dialogue is informed by the full range of human experience.