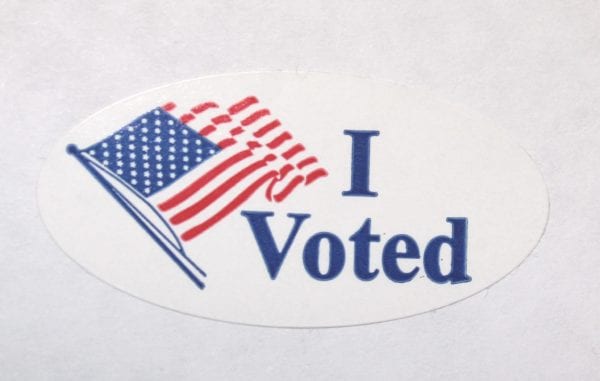 This morning’s primary election began with the news that 80,000 voters would have to cast provisional ballots after the Maryland State Board of Elections said it did not receive address changes from the Motor Vehicle Administration. That number was an increase from an initial estimate that the glitch would affect 18,700 voters. Yikes.

As with other vote-casting days, some people encountered long lines and other foul-ups, including confusion over the aforementioned provisional ballots. Here’s a roundup of what citizens and candidates are reporting on social media.

It’s after 7:30 and no one in Hampden has cast their ballot due to a broken machine. This is no good. There’s lots of close races today. District 13 Precinct 3. @ErinatTheSun pic.twitter.com/f6CWsPWhoT

7:50 and no one cast a ballot yet. Election official just said “we’re trying to figure out if we can void your ballot so you can come back later.”
Voter: “what if we can’t come back later?”
Official: “then you can’t.”@lukebroadwater @ErinatTheSun

We are to put our ballots into “an emergency top bin” on the voting machine and a “determination” on what happens to our ballot will be made later. Democracy dies in darkness. @ErinatTheSun @lukebroadwater

Here is the “emergency bin.” After 8 and not a single vote cast. @ErinatTheSun @lukebroadwater pic.twitter.com/DwtBthQHVI

No Longer Your Polling Place

Voters who went to Friendship Academy in Calverton to cast their ballots were informed that it wasn’t even a polling place anymore. Signage outside indicated otherwise, but elections staffers there sent everyone to nearby James Mosher Academy.

We just found out Friendship Academy Polling Place is closed today. Voters are being directed to James Mosher Elementary @baltimoresun @wbaltv11 @wjz @FOXBaltimore Please help get the word out!

Del. Brooke Lierman (D-46th District) notified voters this afternoon that city elections officials had relocated a polling site from Patapsco Elementary School to nearby Dr. Carter Godwin Woodson Elementary/Middle School. At least that move was only half a mile.

Fox-45 reported the move was made due to complaints of fleas and mice.

The City Board of Elections also notified voters early that they’d switched a voting site in Armistead Gardens, moving it about a half-mile up the road.

On Monday evening, the state told voters in Baltimore County their polling place was moved due to a power outage.

UPDATE (7 p.m.): The Baltimore City Board of Elections announced the following polling places would be open until 9 p.m.

Activist Megan Kenny, who says she’s unregistered with any political party, encountered some confusion at a polling site at Success Academy in Northeast Baltimore. Kenny said she showed up after she was one of tens of thousands to hear from state officials about her muddled voter registration. She figured she couldn’t vote at all, but was told she had been registered Democrat. She sought to clear it up.

It turns out, I *CAN* vote AND they had my correct address but it would be a provisional ballot. I thought…wait…doesn't this defy the definition of a closed primary???

I rolled with it. After some confusion, I was handed a provisional ballot and GUESS WHAT.

It was a REPUBLICAN ballot.

Remember, I didn't think I could vote in the primary at all up until I walked in the bldg. So, I didn't know what I was expecting to be handed. 5/

I asked, "why did you give me a Republican ballot?"

Answer: "that's what we were told to hand out. That's all they gave us."

I repeat: at this polling location, ALL PROVISIONAL BALLOTS ARE REPUBLICAN BALLOTS.

I did not vote. End/

That was not the end.

🚨🚨🚨 UPDATE: I came back and they had since talked to the state and learned that I COULD HAVE BEEN GIVEN ANY BALLOT.

So, I will be given a provisional Dem ballot.

I will be casting one vote in one election.

Another voter, Paul Gardner, said he was told he had to fill out a provisional ballot, only to later learn the email about the mistake as, well, a mistake.

6 years in the same apartment. Voted in 3 election cycles without a problem. Now in the *day before the primary* I find out I'm voting provisionally. pic.twitter.com/MMjj3OaAbf

Fun update: poll worker says I have a regular ballot, not a provisional one. So the BoE is sending out emails warning of provisional ballots to people who don't have to vote on one. https://t.co/4KqKLAFy2B

It’s OK if you’re confused about how this happened. We are too.

Good morning Maryland! Despite what the subject line of this morning's email from @MayorPugh50 says, polls open at 7 am. pic.twitter.com/z6S31Sox4e

Latest posts by Brandon Weigel and Ethan McLeod (see all)